WOODLEAF — A man who gave a 32-year-old woman a place to stay was robbed at knifepoint Wednesday. The woman accused of robbing him was arrested in his truck in South Carolina.

The Rowan County Sheriff’s Office charged 32-year-old Michelle Gomon with felony robbery with a dangerous weapon and unauthorized use of a motor vehicle. According to Maj. John Sifford, the victim, contacted law enforcement on Wednesday to say he was robbed at knifepoint by a woman at his Foster Road home. 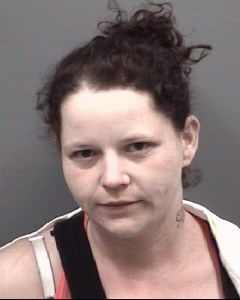 The victim said Gomon took his 2004 Dodge Ram, his wallet that contained $20 in cash and a debit card.

The victim told deputies Gomon had been living at his home and that he treated Gomon “like a daughter.” She left the night before the robbery in the man’s truck to go eat with friends, according to the Sheriff’s Office. The victim sent Gomon a text message around 2 a.m. when she failed to return.

He fell asleep and awoke around 5 a.m. after he said Gomon kicked the door in and used a pocket knife from his truck to threaten him. He said Gomon held the knife to his throat and demanded money. She told the victim she was “headed to Greensboro.”

An arrest warrant was issued for Gomon. Mount Pleasant, South Carolina, police contacted Rowan County to say they had Gomon in custody. Gomon will be extradited to Rowan County.