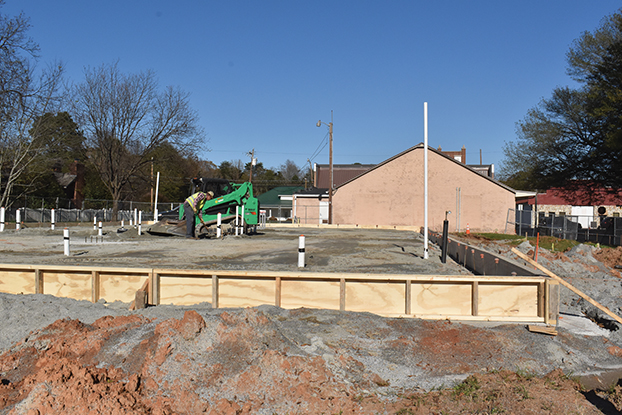 Construction has started on the new law enforcement building that will house the Rockwell Police Department. The building should be completed by fall of 2021. Ben Stansell/Salisbury Post

ROCKWELL — This time next year, Rockwell Police Chief Hugh Bost Jr. won’t have to reach for a mop when a heavy rain comes.

The concrete slab has been laid and construction workers are currently laboring to construct a law enforcement building for the town, just behind the current one. In a few weeks, Bost said, steel beams will arrive and will be raised to form the building’s skeleton.

For Bost and the rest of his police officers, the $1.4 million building can’t go up fast enough.

“I never envisioned it happening in my lifetime,” Bost said. “I figured we were here to stay.”

Bost didn’t think that his department would ever move from the Jim L. Bost Law Enforcement Center to a new building, but he’s wanted it to happen for some time.

The building the police department uses was constructed about 100 years ago, Bost said, and has housed a sporting goods store, an automotive repair shop and a laundromat. When the town bought the building in the early 1990s, Bost said staff tried to fix the aging structure by giving the facade a facelift. Despite the enhancements, the building continued to degrade.

Every time more than a few inches of rain comes down, the front of the building floods. Just a few feet removed from Highway 52, the current building is lower than the street. When it rains, that water runs off of the road right to the front door, an unwelcome visitor to the police department.

“There’s no stopping it,” Bost said. “We’ve put silicone in all the cracks and did everything we could to try to stop it. But when it was raining like three or four inches, water runs in everywhere.”

Over time, the flooding has eaten away at the building. A breaking point came when strong rains brought on by Hurricane Florence revealed new cracks and worsened old ones along the facade. After insurance inspectors and engineers inspected the building, it was deemed uninsurable.

“They would not cover insurance on it anymore as far as water damage or anything like that,” said Rockwell Mayor Beau Taylor. “It was a water issue. A 100-year old building just wasn’t going to hold up for us.”

The town faced a decision: try to fix the facade again or build a new structure. For Bost, it was a no brainer.

“Looking at the big scheme of things, it turned out we were going to basically build a new building for about the same amount of money that was probably going to be wound up putting the Band-Aid on an existing building and trying to patch it up,” Bost said.

The new building, which Bost said the town could “roll into” from the back of their current one, is set back farther from Highway 52 on higher ground, giving the building better protection from water runoff. The building will have 30% more floor space and will be much more “usable,” giving the Rockwell Police Department’s staff of about 10 officers more room. The parking lot will also be easier to access. 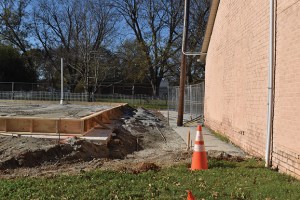 The new Rockwell law enforcement building will be constructed just feet away from the old one, but it will be farther from Highway 52 and will be located on higher ground. Ben Stansell/Salisbury Post

W.C. Construction of Winston-Salem won the low bid for the project and has been working to lay the foundation for the building for several weeks. To finance the project, Rockwell received a loan from F&M Bank that it will pay back over the next 20 years. The town will use some available cash to pay $230,335 in engineering and architecture fees, utility move costs, furnishings and administrative costs. Between the bank loan and the available cash on hand, the town will avoid having to raise taxes to fund the project.

“This will be a huge benefit to the town,” Taylor said. “It will be here for a long time, just like the other one was.”

While the new building is being constructed, the Rockwell Police Department will remain in the old one. Once the department moves into the new building, which Bost said should happen by the fall of next year, the old building will be demolished.

“It can’t happen soon enough,” Bost said. “I’m tired of battling water and having to mop up.” 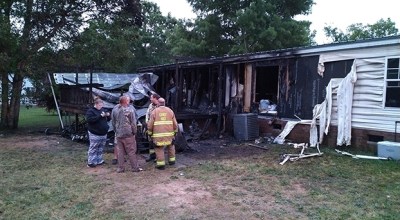 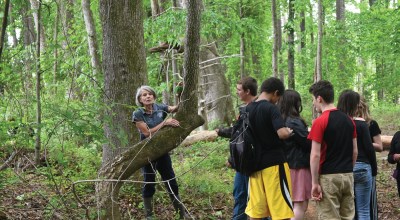