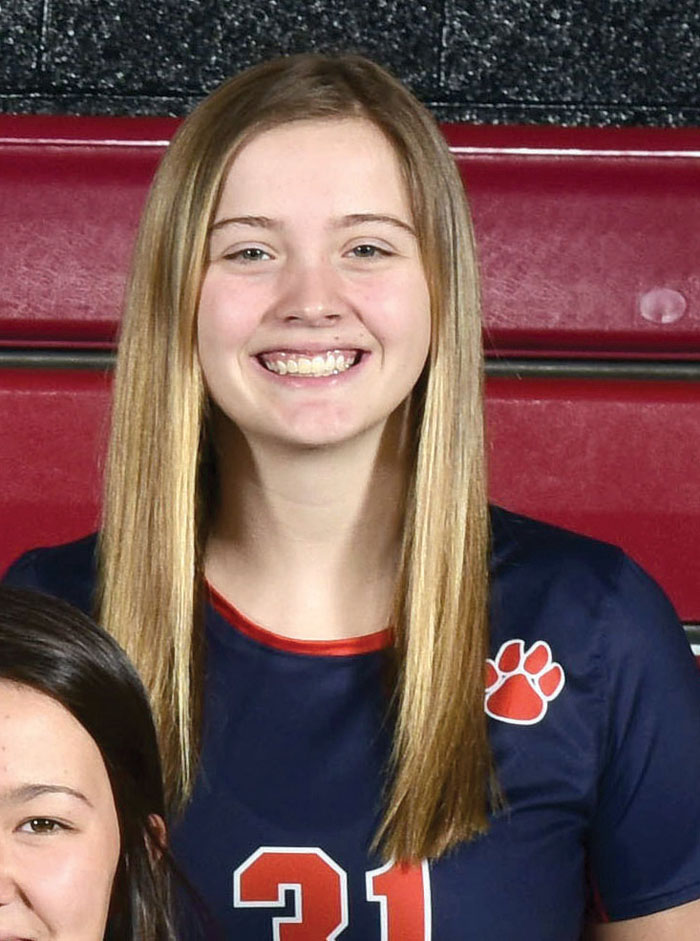 CHINA GROVE — Carson senior Jaden Vaughn is one of those Little League World Series girls who energized Rowan County with a nationally televised world championship in 2015 and a runner-up finish in 2016.

Nevertheless, the 5-foot-10 Vaughn picked volleyball over softball. She signed recently with Lenoir-Rhyne, a Division II school that is one of Catawba’s traditional rivals in the South Atlantic Conference. Vaughn’s father (Jeff) was a Catawba basketball player, but she says he’s cool with that.

“I did talk to Catawba,” Jaden said. “But I just didn’t want to stay that close.”

Vaughn also picked volleyball over basketball, a sport in which she and current Carson standout Ellie Wilhelm led the Southeast Patriots to the 2017 middle school championship game.

“I had an older sister (Laura) who played volleyball, so I started playing in fourth grade and I knew by the time I was in middle school, when I was 13 or 14, that volleyball was my best sport,” Vaughn said. “I got to play on High Rock club teams with older players like Tori Hester (West Rowan, Troy), Mallory Weast (Carson) and Ashley Johnson (West Davidson, Catawba). They helped me get better and I had a really good time. I enjoyed all the winning.”

Laura Vaughn played on Carson volleyball teams that finished as 3A state runner-up in 2012 and 2013. Jaden witnessed all that winning, those huge crowds, and she was eager to become part of that tradition. She became an immediate starter for the Carson varsity as a freshman in the fall of 2017.

She’s been one of the top players for the Cougars for her entire career and has helped Carson go 69-17 in three seasons. Carson was North Piedmont Conference co-champ her sophomore year.

Even with a COVID-shortened senior season, she’ll be one of those girls who easily surpasses 1,000 career kills and 1,000 career digs.

She topped 400 kills as a junior and she’s had two seasons with more than 300 digs.

She also has well over 100 blocks in her career.

Vaughn has been an all-county player three straight seasons. Her strength is that she doesn’t have a weakness.

“She’s so well-rounded that she’s always on the court,” Carson head coach Kelan Rogers said. “I’m not saying she’s amazing at anything, but she’s really good at everything. She can hit from the right side, the left side or the middle equally well. And she’s just as good defensively as she is offensively, and she’s just as good in the back row as the front row. There are girls who can hit, but they’re a liability on defense. There are girls who can block, but they’re not very good in the back. Her kind of versatility is really pretty rare. If you’re a college coach, You can use that sort of versatility.”

Vaughn’s recruiting hit a lull over the summer with camps and travel-ball tournaments shut down and opportunities to impress college coaches eliminated.

But Lenoir-Rhyne was able to hold a camp. Vaughn’s father drove her to Hickory and she impressed new head coach Shannon Hudson, who coached several Rowan volleyball players during her years at Catawba Valley Community College.

“I really liked the coaches and the girls,” Vaughn said. “It felt like it was already home.”

Vaughn played mostly in the middle for Carson last season, but Rogers said the plan is to use her talents mostly as an outside hitter this season.

But she’ll do it all again. Hitting, blocking, digging, serving, never leaving the floor.

“We’ve got a lot of work to do, but we should have a good team,” Vaughn said.

Panthers say McCaffrey not expected to play Sunday against…