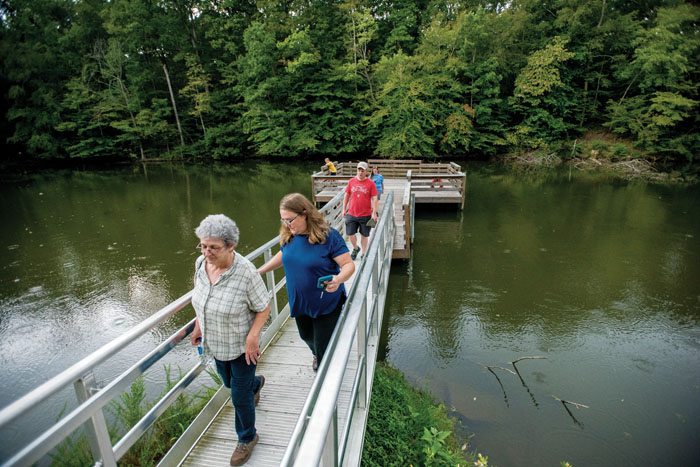 The existing 42-acre property will gain 50 more acres, connecting the preserve to Grants Creek. The Duke Energy Foundation contributed $10,000 to Three Rivers for the acquisition, and the trust has received another $10,000 private donation. The rest of the funding has been “provisionally” awarded for the acquisition by the N.C. Land and Water Fund, with the remaining amount expected to be made available in early 2021.

The land will be transferred to the Town of Spencer after Three Rivers acquires the property from a private owner and added to the existing park.

Crystal Cockman, preservation director for Three Rivers Land Trust, said the trust has a conservation easement on the existing park with the town to preserve it. The funding for the initial purchase was in honor of the Stanbacks, notable local philanthropists, and collected from a number of private donors. Cockman said it is unique to have an undeveloped and intact natural community with as much biodiversity as the park does near a downtown area.

Cockman said the land trust tries to maintain and improve habitats. It performed a natural heritage inventory on the area this spring and found a rare plant species in the park along with a number of native species, such as wild ginger and Jack-in-the-pulpit.

A Catawba College intern also performed an inventory of invasive species, and the trust has had some goats who were volunteered to feast on the kudzu in the park trim back the vine.

The current park has about 2.5 miles of trails. The addition will allow more trails to be built as well as creek access so locals can cast off on canoe or kayaking expeditions.

A passive park means the intention is to keep human intervention minimal by not cutting trees or having many structures.

“We’re trying to keep it in its natural state,” Cockman said, adding nearby Salisbury has always been the trust’s home. Having the amenity close for everyone in the county is a great resource, she said. Cockman walked the trails at the park on Tuesday for national Take a Hike Day.

Spencer Mayor Jonathan Williams said the expansion is a great opportunity to grow what he called a jewel in Spencer.

“It protects important, undeveloped natural land,” Williams said. “As we know, in our municipal areas, there is not a lot of that these days.”

Williams said the town is continually wanting to promote its green spaces, including through an N.C. Department of Transportation grant it was awarded to provide pedestrian and bicycle access from the Yadkin trailhead into town.

Skating rink, more stalls on the list of plans for this year’s Winterfest in Spencer