Catawba basketball: Indians happy to be back on the hardwood 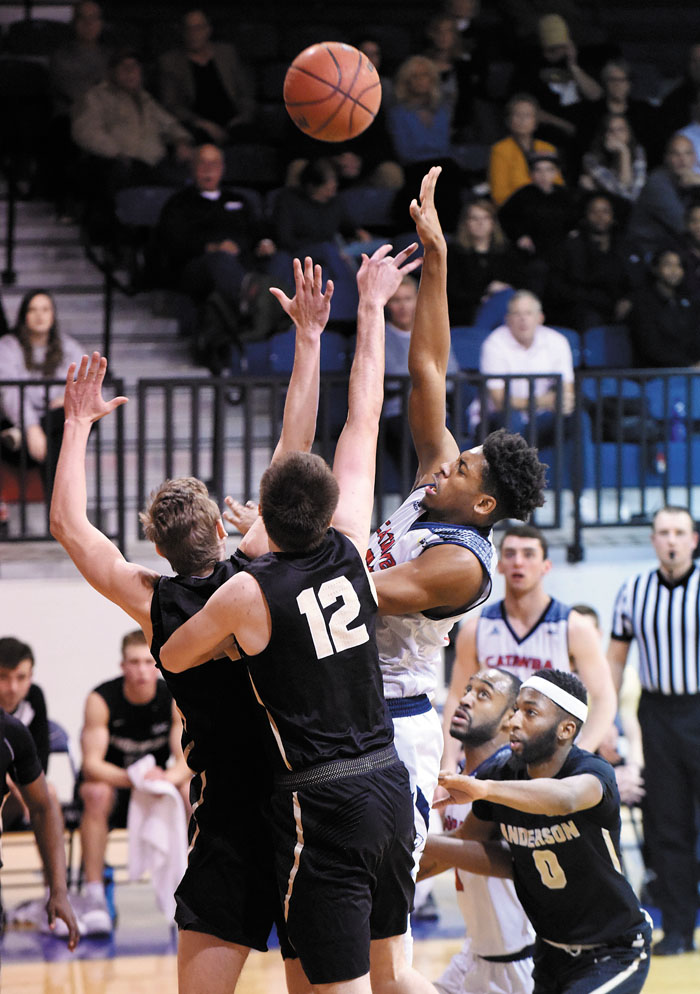 Catawba's Terrence Whitfield shoots over Anderson defenders. The Indians will be counting on him if he can get over a bad case of turf toe. file photo by Wayne Hinshaw, for the Salisbury Post

SALISBURY — Catawba men’s basketball team hobbles into a new South Atlantic Conference season on Saturday afternoon, but is very happy to be there.

The Indians will host Anderson at 4:30 p.m. on Sam Moir Court at Goodman Gym, with a severely restricted fan base of 25 and plenty of ailing players on the roster.

Four of the projected top seven Indians are questionable or out for the opener. Exciting dunker/defender Larry McLeod, one of the few vets, won’t be available until the second semester, but head coach Rob Perron, coming off a strong 20-8 season, is exclaiming, not complaining.

“We’re staying in the now and we’re appreciating the opportunity to play,” Perron said. “We’re excited to be back on the hardwood. This is therapy for everyone. And as far as some guys being hurt, it’s next man up. We’ve got a talented roster.”

COVID-19 is directly or indirectly related to the injuries. When the Indians reconvened to try to prepare for an uncertain season, players were at varied levels of conditioning and readiness.

“When you’re down for seven months, it’s a very slow track to get back,” Perron said. “You look at the current NFL season, and there’s more injuries than ever. This is just something we’ve got to get past.”

Catawba is picked fifth in the SAC because the subtractions from the roster were brutal. Marcell Haskett, Devin Cooper, Daquan Lilly and Malik Constantine, the top four scorers are gone. So are key role players Zaqwuan Matthews and Ben Zemonek.

“We want to keep the bar high,” Perron said.

Terrence Whitfield, a 6-foot-4 junior who poured in 31 points against Queens in what turned out to be Catawba’s final game of the 2019-20 season, figures to be one of the more prominent Indians, but he’s been battling a painful case of turf toe. He’s critical because he can do a lot of things — score, run the floor, rebound and defend multiple positions.

“He is our catch-all guy and he’s a mature guy,” Perron said.

Ace Carter, a 6-6 player who played in 10 games for Catawba down the stretch last season, is back. He’s extra athletic, tough to stop on the drive.

Experienced D.J. Johnson, a steady four-year player, will get some minutes.

Carter Phillips has returned to Catawba after transferring from Catawba to King. He’s labeled as a “specialist,” a 3-point shooter, but he was a helpful player two seasons ago.

Ben Bowen, 6-10, has been groomed for several quiet years. This could be a breakout season for him.

“He’s taken on a leadership role and has improved a ton,” Perron said. “We don’t know yet if he’ll be playing 20 minutes or 10 minutes a night, but he’s going to be a factor.”

Senior point guard Marcus Burwell (6-3) will be a player to watch. A transfer from D-I Florida International, he’s rated as a terrific offensive player.

Perron said Burwell still has work to do to tighten his defense, but he’s a talent. Catawba assistant Daniel Waln predicted Burwell will be one of the SAC’s best players.

Catawba got taller and bigger with a recruiting class that brought in transfers and ready-to-play junior college men, as well as some freshmen that the Catawba staff can develop.

“We were heavy on 4s last season and now we’re heavy on 5-men,” Perron said.

The most advanced freshmen are 6-8 Bernard Pelote, a rangy wing from Savannah, and 6-5 Caleb Robinson, a big guard from Louisiana.

“Robinson is as competitive as anyone we have,” Perron said. “I don’t know if competitiveness can be counted as a tool, but if it is, it’s something he definitely has in his tool box.”

While there’s talent on board, the challenge for the coaching staff will be to put it together.

The challenge for the players will be to play together. They’ve been the main men for their previous programs.

There have been no scrimmages against outside opponents and even intrasquad games have been limited.

There will be no warmups, no early non-conference games this season. It’s a plunge into SAC play right away.

“It’s hard to simulate game pressure and intensity in practice,” Perron said. “There’s no substitute for game experience, so we’ll have to learn on the fly. But I think we’re unselfish and I think we’ll progress.”

This will be the strangest season — and it’s obviously day-to-day.  Three SAC men’s or women’s programs postponed early games due to COVID-19 issues.

If they can keep playing, the Indians will have to create their own energy without fans.

Perron figures Catawba’s modest ticket allotment usually will have 18 being distributed to parents of players who can definitely attend. The rest will go to a handful of boosters. Maybe there will be a lottery for a lucky student or two to attend each home game.

“We’ll try to maximize the tickets we do have, but people might actually have a better chance of seeing us play out of state,” Perron said. “North Carolina has some of the most stringent rules.”

Wake Forest-Duke football game called off because of coronavirus,…