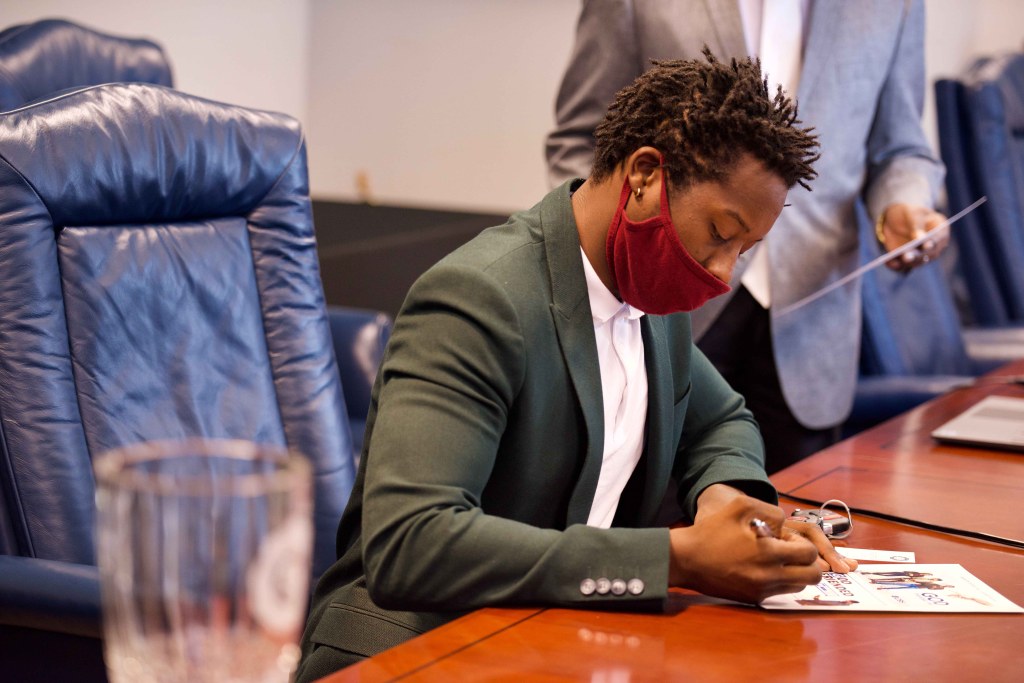 SALISBURY — Brandon Micheal Hall gave a special address to Livingstone Students earlier this month as part of the college’s virtual convocation, but that was not enough for the actor from South Carolina.

Hall made his way to Livingstone on Tuesday to meet in person with faculty and students, as well as receive an award from Livingstone President Jimmy Jenkins. Hall signed autographs and let students take photos with him on the second floor of the J.W. Hood Building before taking part in a question and answer session.

He is known for his starring roles in television series such as “God Friended Me,” sitcom “The Mayor” and satirical thriller “Search Party.” Hall has had a handful of film roles as well.

Jenkins said Hall coming to visit the school shows a humility on his part because he is a celebrity.

“He didn’t have to come to Livingstone, but he did,” Jenkins said.

The character Hall played in “God Friended Me” is symbolic of what Livingstone represents, Jenkins said.

“This was good for us,” he added. “It’s a great wholesome series and I think it’s good for our students.”

Hall said his main focus now is continuing his education. He wants to complete a master’s of business administration degree and use his education to pursue other ventures outside of acting. He said getting involved with Livingstone has been a perfect affirmation for his desire to go back to school.

Hall said he knows his next acting job will come along, but he wants to explore other avenues that he’s passionate about as well. He is contemplating opening a hub for artists to create their work and wants to be in a position where he is creating jobs for people.

Dean said he hopes students will see Hall as a role model and connect with his speech, which included discussion about late hiphop icon Tupac Shakur.

Now that he has met Hall, Michael Gilyard, a sophomore computer information systems major, said he intends to go back and watch some of his work more closely.

“In this case, I feel like it’s very important to see someone that actually looks like me,” Gilyard said. “We are of the same ethnicity, so it’s so important to support one another in ways like watching each other’s shows.”

When asked why he wanted to come to the college, Hall asked, “Why not?”

He said being honored and being able to inspire students as well is a blessing.

He added that Salisbury is a beautiful place and reminds him of towns where he’s from in South Carolina.