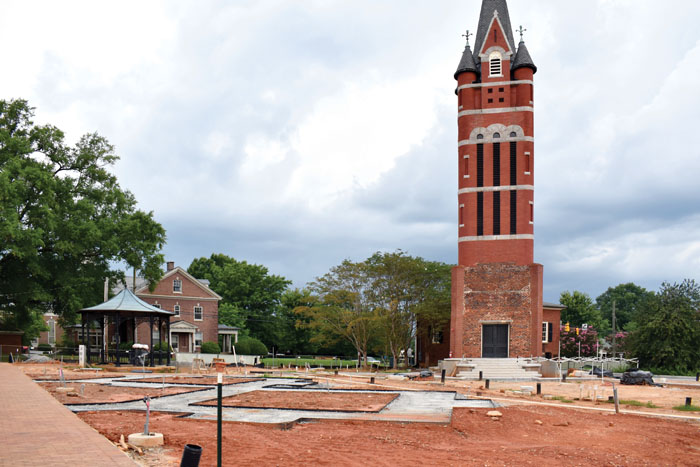 The red dirt surrounding the Bell Tower will soon be transformed into a vibrant green space.

SALISBURY — City council members on Tuesday enthusiastically approved the allocation of $700,000 from the current budget to purchase the Bell Tower Green Park property, with one council member naming it among the list of best real estate purchases in history.

The council approved the allocation of $700,000 from the general fund in the 2020-21 fiscal year budget. The payments for the purchase will be split in half, with $350,000 paid by the city in the next two weeks and the second half granted upon completion of the project next year. However, $350,000 of the city’s purchase will be reimbursed by the Parks and Recreation Trust Fund grant received in 2018.

Salisbury Parks and Recreation Director Nick Aceves provided council members with an update on the project. The open date is scheduled for April as long as hurricane season or COVID-19 doesn’t delay that progress. It’s a $12.3 million project, with $2 million of that for land acquisition and $1 million for architect fees. Currently, the project is “just shy” of its fundraising goals.

The $700,000 will contribute to construction costs, he said.

Once the park is completed, Aceves said it will be inspected by a representative of the state’s Recreation Resource Service at N.C. State University to ensure it meets the city’s stipulations as agreed to in a memorandum of understanding approved by the city and attorneys.

Once the ownership paperwork is in the city’s possession, the city will submit an invoice for reimbursement from the state.

“On the list of the best real estate deals in history, I think the purchase of Long Island for a necklace would be No. 1, the Louisiana Purchase would be No. 2, and I think the Bell Tower Green purchased by the city at this cost would be No. 3,” said council member Brian Miller. “I’m so excited by the fact this is coming to fruition. I’m a little giddy.”

“We’re all so happy (about) this purchase,” Mayor Karen Alexander added. “I look forward to signing this one.”

Also at the meeting, city council members followed the lead of Rowan County Board of Commissioners and passed a resolution urging locals to follow the three Ws — wash hands, wait 6 feet apart and wear a mask — and avoid the “three Cs,” which include crowds, close-contact settings and confined spaces with poor ventilation.

Commissioners passed their resolution during a meeting on Monday as more than 700 cases in Rowan County are considered currently active, 126 families have lost a loved one to COVID-19 and cases continue to rise across the state and nation. The city’s resolution also noted that last week 82 cases were reported in a single day.

“This is very important and critical for the city,” said council member David Post. “We’re spiking like the rest of the country.”

Additionally, $177,390 will be appropriated from the stormwater fund balance. City manager Lane Bailey was authorized to execute an agreement with Kemp Sigmon Construction Co, Inc., for a unit-based contract in the amount of $533,859 for construction of the McCoy Road Culvert Replacement project. The city included $356,459 of that cost in the budget, but appropriation from the stormwater fund balance is needed to complete the project.

• Council members authorized the sale of parcel 025-013, located in the 1000 block of Barbour Street, in the amount of $1,200. The approval is subject to concurrence from the Rowan County Board of Commissioners. The profit will be split between the city and the county.

• Council members voted to authorize the city manager to execute a $109,782 contract with Charles R. Underwood, Inc. for construction of the Coley Road Sanitary Sewer Lift Station upgrades. This project will not have an impact on the 2020-21 fiscal year budget as it was already included when the budget was passed.

• Council members voted to authorize the city manager to execute an $89,303 contract with SEPI for construction inspection of the Grants Creek low-water pedestrian bridge that connects Meadowbrook to the north side of the creek at Catawba College.

• Council members approved a right-of-way use permit for the travel lane in the 100 block of South Lee Street and the parking lane in the 200 E. Innes St. for intermittent single closures from Nov. 18 to Dec. 6 and closures of both rights-of-way from Dec. 7 to Jan. 17 due to construction at 201 E. Innes St.

• City council members adopted a resolution to declare its intent to close a portion of an alley located in the 800 block of West Cemetery Street and set a public hearing for Jan. 5.

• City council members approved the consideration of two ordinances that would amend the city code. Those ordinances include reducing the speed limit on Old Plank Road as well as all streets in The Gables subdivision to 25 mph.

• Council members awarded Officer Christopher Schenk his sidearm and badge in recognition of his retirement from the Salisbury Police Department on Nov. 1.

• The mayor proclaimed Nov. 20 the “Transgender Day of Remembrance,” and will declare Nov. 20 to Dec. 20 “Survivors of Homicide Victims Awareness Month.”

Council member Tamara Sheffield, on the behalf of Salisbury Pride, thanked the council and mayor for recognizing the “Transgender Day of Remembrance” and working toward equality for all.

“Thank you all for taking a moment to recognize a very invisible group of the population that is singularly targeted for violence and hate,” she said. “They are people, too.”

Additionally, she commended the county commissioners for making a statement about the COVID-19 resolution, which she said shows more solidarity among the city and county.

Additionally, the Community Planning Services Department will host a virtual kick-off meeting on Thursday at 6 p.m. for neighbors and interested parties to learn more about the Kesler Mill Brownfield Cleanup Project. A link to register for the Zoom meeting can be found by visiting www.salisburync.gov/KeslerMill.