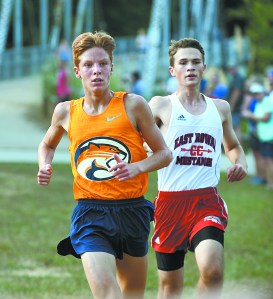 Brayden Self (3rd), Shayden Edwards (4th), Carson Ritchie (5th) and Daniel Fabian (6th) were the other scorers for the Mustangs.

East’s Meredith Bonner was the individual winner with a time of 21:10.

Blackelder has signed with UNC Pembroke.

The  (CIAA) announced men’s and women’s basketball schedules for the 2020-21 regular season on Wednesday.

The modified schedule will feature a 16-game conference slate, including 10 divisional and six cross-divisional contests.

Play begins on January 9 and continues through Feb. 20. The cross-divisional schedule, which runs through Jan. 25, will use the men’s and women’s doubleheader format.

To help ensure the health and safety of student-athletes, coaches, and staff, men’s and women’s games will move to a split schedule to finish out the regular season as divisional play begins on Jan. 28.

Following the conclusion of the regular season, teams will compete in the 2021 CIAA Basketball Tournament, set to take place February 22-27 in Baltimore.

The CIAA and its membership will continue to monitor the COVID-19 landscape, while following current federal, state, local, NCAA, and campus guidelines, and make in-season updates to the schedule and game environment protocols, as necessary.

The NCHSAA has unveiled a new game plan as far as realignment for the 2021-22 school year.

With COVID complications this year, the NCHSAA will use average daily membership numbers from the 2019-2020 school year to form the realignment plan, which will divide schools into four evenly split classifications.

Schools will get a “realignment score” based on  ADM figures (50 percent), percentage of students who receive government assistance (25 percent) and Wachovia Cup points over the last three years (25 percent).

The NCHSAA will release a draft proposal for new conferences on Dec. 10.

Alanna Deal, who has had a spectacular high school and travel ball career, signed with USC Upstate’s program.

A shortstop at South Columbus, near Whiteville, she’s the daughter of Kevin Deal, who was a standout third baseman for South Rowan in the 1990s.

Deal also has been an all-conference performer in volleyball, basketball and cheerleading.

Javon Hargrave (North Rowan( made three tackles for the Philadelphia  Eagles  and was credited with half of a sack in Sunday’s 27-17 loss to the New York Giants.

The South Atlantic Conference Presidents Council announced Tuesday that Emory & Henry College has been invited to join the SAC, pending acceptance into the NCAA Division II process. Emory & Henry will begin competition in all conference sports in the 2022-23 academic year.

Larry Petrea shot a 74 for low net, while Seamon had low gross score.