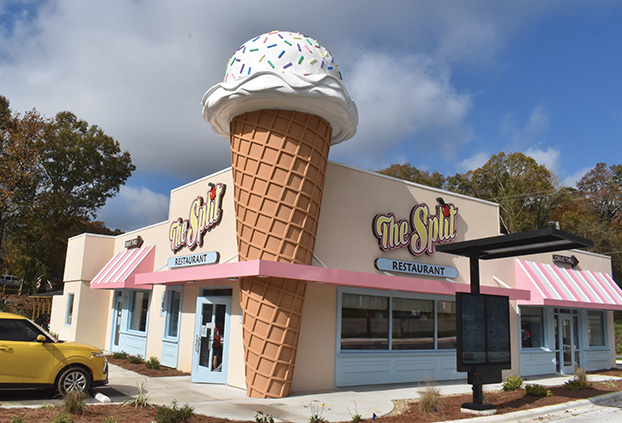 KANNAPOLIS — In search of an “iconic symbol” for his new restaurant, Brian Freeman found inspiration in ice cream.

To accompany Jocko’s Mini Golf, which he opened on North Cannon Boulevard in July, Freeman recently opened an ice-cream themed restaurant called The Split that will serve as a spot for mini golfers to get a meal and a frozen treat before or after their round.

Several months ago, Freeman began to discuss what the restaurant would look like with Ginger Moore of Carlos Moore Architect. The two brainstormed design concepts that would make the building stand out. The result — a 27-foot tall ice cream cone topped with a vanilla scoop covered in colorful sprinkles that protrudes from the front of the building.

“We tried to listen to what he wanted to do and he kept talking about ice cream and the history,” Moore said. “We went back to a lot of the retro ice cream places that had stuff from the 1960s and 1970s and we just took his words and ran with it.”

The gargantuan scoop is designed to serve as a nostalgic beacon, beckoning people to stop at the restaurant to try a burger or one of five variations of the banana split featured on the pink, yellow and blue menu.

“What I was trying to do is create something that will definitely be different and have the potential of identifying the neighborhood,” Freeman said. “People can say ‘Hey, come to the big ice cream cone.’ Over time, that’s my goal is to make it something the city embraces and says ‘Hey, that’s ours.’” 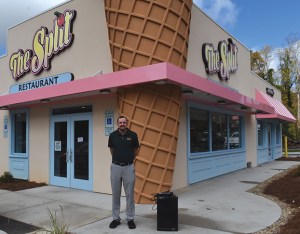 Brian Freeman, the co-founder of Cannon Pharmacy, stands in front of his newest business venture — The Split, which is on the same property as Jocko’s Mini Golf, the course he opened in July. Ben Stansell/Salisbury Post

Even though Freeman opened Jocko’s before The Split, the idea for the restaurant has been in his head since he graduated from the University of Pittsburgh School of Pharmacy nearly two decades ago.

Born in central Pennsylvania, Freeman decided to move to the Charlotte area 19 years ago after graduating from college. He came to North Carolina with the idea of opening up a pharmacy that had a soda fountain and ice cream parlor, just like they did in the old days. Freeman and a business partner eventually opened Cannon Pharmacy, which has spawned five other locations. Except, none of the pharmacies serve scoops or sundaes.

“We were going to put an ice cream shop inside the pharmacy, but pharmacies have changed so much that you couldn’t do it anymore,” Freeman said. “We tabled that idea and said we’d do it at a later date.”

Now with four young boys, Freeman’s dream found new life in his desire to create a place where families could spend a night out without traveling too far.

“I live here, I’ve got four little boys and I know that it’s challenging to find things for them to do,” Freeman said. “I’m proud that it’s something that the kids will like.”

Originally, The Split was supposed to come before Jocko’s, but as Freeman started to plan for the restaurant he realized the complexities of opening up an eatery.

“The restaurant was actually harder than the golf course, so the golf course finished first,” Freeman said. “… It was a lot of internal issues of wanting to make sure we had a good product and when COVID hit, the golf course was underway and that guy could continue, but the restaurant hadn’t been permitted yet and the city wasn’t sending people out to do permits so that put us a couple of months behind.”

As someone who doesn’t even like to make peanut butter and jelly sandwiches, Freeman needed a partner who could develop a menu and oversee a staff. He found Bob Kirby, an experienced restaurant manager who has spent his career in culinary institutions.

Together, Kirby and Freeman created a menu that features “made to order” burgers, sandwiches, salads and sides. An entire page of the menu is dedicated to desserts and lists several different variations of the banana split, including a true to the original version called “The 1904.” That specific split has a special meaning for Freeman.

“The banana split was invented in 1904 by a pharmacist named David Strickler,” Freeman said. “That’s why I called (the restaurant) ‘The Split’ because of that connection. He and I actually went to the same school.”

When The Split officially opened Friday, Freeman said he had mixed emotions. With cooler weather likely to close Jocko’s in the coming months, Freeman said he’s already looking forward to the spring, when both the restaurant and the mini golf course can thrive next to each other. 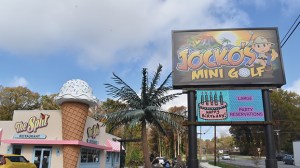 The Split restaurant will give mini golfers the option of a neaby meal and frozen treat before or after their rounds. Ben Stansell/Salsibury Post

By pairing The Split with Jocko’s, Freeman said that he is hoping to cultivate a “Disney-like” atmosphere.

“We’re trying to get you to hang out for a little while, enjoy yourself, relax and spend some time with your kids,” Freeman said.More information about the restaurant can be found on Facebook.