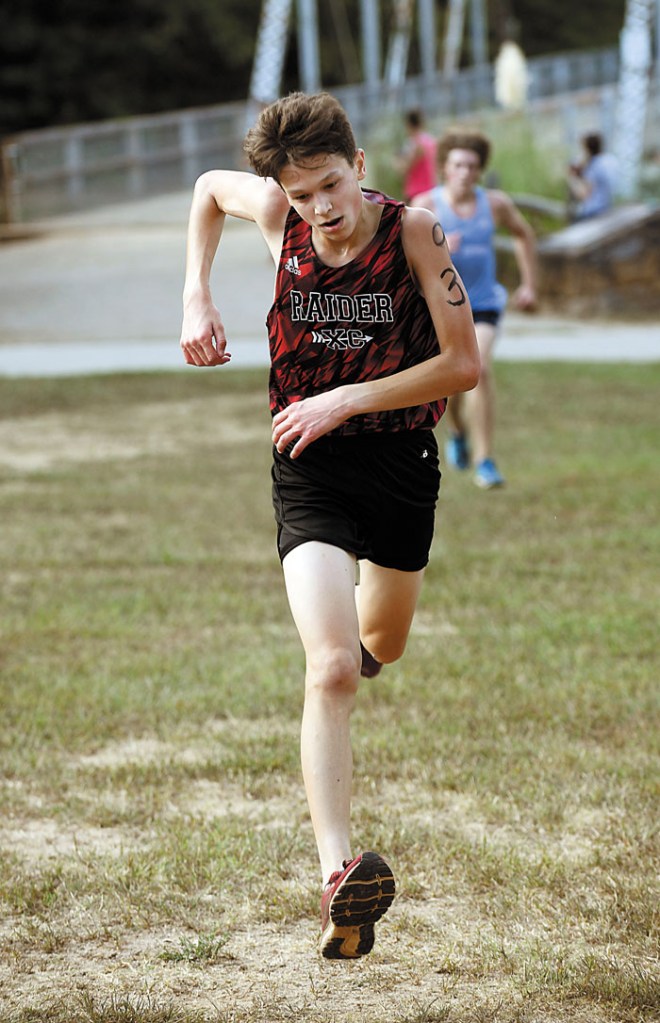 Landon Cromer of South Rowan will run collegiately for Lees-McRae. File photo by Wayne Hinshaw, for the Salisbury Post

LANDIS — South Rowan senior Landon Cromer made a not-so-smooth transition from soccer to cross country just a couple of years ago.

He’s come a long way in a short time. Cromer signed last week to be part of Lees-McRae cross country and track and field programs.

Cromer has helped South win several championships and he placed fourth in the Rowan County Cross Country Championships as a junior, but South coach Scott Julian chuckles out loud when he thinks back to Cromer’s earliest efforts.

“When he first started running for us, he was this scrawny, scrappy soccer player with atrocious running form,” Julian said. “He was trying to run distance like it was a soccer match. He’d sprint some, and then he’d jog some. Sprint some, jog some.”

Cromer eventually figured it out.

“I had run track and I had done OK in the 3200 meters (seventh in the Rowan County Track and Field Championships as a freshman) and I’d played soccer,” Cromer said. “Sophomore year, I tried cross country for the first time.  I think I’ve kept getting better at it because I’m one of those people who responds when my teammates push me. When they push me, I also push myself to be as good as I can be.”

Cromer had the ideal person to learn from. Teammate Noah Julian has been the county’s top distance runner in recent years.

Cromer didn’t just observe how it’s done. He was willing to put in the hours and the miles to keep slicing seconds off his times.

As a sophomore in the fall of 2018, Cromer was 16th in the county cross country meet. He was South’s fifth runner in 19:10, as the Raiders took the championship.

In the spring of 2019, he was fourth in the 3200 meters in the Rowan Country Track and Field Championships.

Junior year, Cromer’s progress continued in the fall of 2019.

He ran 18:18 in the Rowan County Cross Country Championships at Dan Nicholas Park. That was good for fourth place. He was South’s third runner, as the Raiders successfully defended their title.

In the Central Carolina Conference Championships, Cromer placed eighth in 18:14. He was all-conference and helped South claim its first conference title since 1980. It was a redemption win for South, which had expected to win a year earlier but hadn’t gotten the job done.

“It felt great to win championships,” Cromer said. “That’s what we work so hard for.”

He ran 18:13 in the 2A Midwest Regional to help South qualify for the state meet.

Then, in the state meet, he had a lot of people pushing him. He responded with a personal-best clocking of 17:58.

When Cromer visited Lees-McRae, located 18 miles from Boone in Banner Elk, he liked the mountains, the school and the coach.

“They offered me more than anyone else did,” Cromer said. “They’ve also got a strong criminal justice program, and that’s the major I wanted. That was an important factor in the decision.”

The pandemic also has created a strange, new calendar for the 2020 cross country season, which is scheduled to start on Nov. 21 for the Raiders. Last year, the season ended on Nov. 9, so this is going to be uncharted territory for coaches and runners.

It will be even more interesting for Cromer in that he now has a little brother (freshman Grayson Cromer) debuting on the South squad.

“I think this season is going to be very different for everyone,” Cromer said. “We’ve all had a lot more time to prepare than usual. Right now, guys aren’t in start-of-the-season shape, they’re in mid-season shape. But the other side of the late start is that it’s going to be very cold when we’re running in December and January.”

Cromer will handle it.

He put that run some-jog some approach behind him a long time ago.

Now he’s a runner. He has a consistent pace and plenty of endurance and he figures to be one of the county and CCC’s toughest competitors in 2020-21.

“Personality-wise, Landon is one of a kind, and his teammates love him,” Coach Julian said. “We’re all proud of how far he’s come. He doesn’t get a lot of attention, but we all know we wouldn’t be where we are without him.”