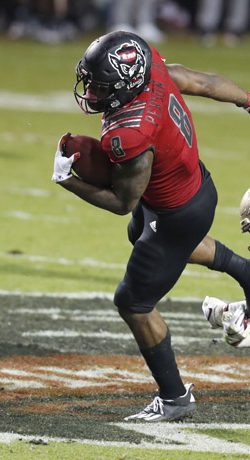 RALIEGH (AP) — Bailey Hockman threw for three touchdowns and ran for another against his former team as North Carolina State defeated Florida State 38-22 on Saturday night.

Hockman, who began his collegiate career in 2017 at Florida State program, was 24-for-34 passing for 265 yards and an interception. Thayer Thomas, a redshirt senior, made a career-high 11 catches for a career-best 135 yards and two touchdowns.

Emeka Emezie dodged defenders on his way to a 21-yard touchdown reception for NC State to conclude a game-opening 12-play, 75-yard drive. Hockman was 8-for-8 passing for 93 yards on the possession.

Hockman threw a 10-yard touchdown pass to Thomas early in the second quarter. Hockman ran 4 yards for a 21-3 lead with 1:32 to play in the first half.

Florida State’s Jashaun Corbin scored on a 28-yard fourth-down run in the third quarter. Purdy connected on touchdowns of 69-yards Ontaria Wilson and 24-yard to Warren Thompson for the Seminoles, who dropped to 0-4 in road games.

Florida State: Quarterback Jordan Travis didn’t travel with the Seminoles. It was speculated that he might not be available after sitting out the second half a week earlier against Pittsburgh. Purdy became the fourth starting QB for Florida State this year. The Seminoles also had four freshmen start on the offensive line. Travis had scored at least one rushing touchdown in five consecutive games -– a program record for a quarterback.

N.C. State: The Wolfpack’s defense allowed at least 495 yards of total offense in four of its first seven games. That trend came to a halt as Florida State was limited to 347 yards –- with nearly half of those in the fourth quarter.

Florida State: Home vs. No. 4 Clemson next Saturday.

NC State: Home vs. No. 22 Liberty, which is undefeated, next Saturday.