After success of ‘Everybody Was Happy,’ Hap Roberts looks to give back 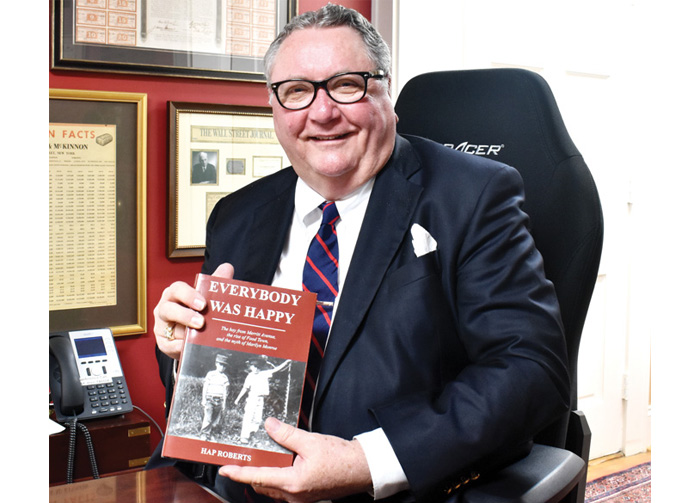 Hap Roberts combined entertaining stories from his childhood growing up in Salisbury with tales of Food Town's early success in "Everybody Was Happy." Ben Stansell/Salisbury Post

SALISBURY — Hap Roberts hasn’t strayed far from the place where he grew up on Merritt Avenue in Salisbury.

Roberts attended and graduated from college just down the road at Catawba and runs his Statewide Title business from the house where his Aunt Mabel used to live, within smelling distance of the Krispy Kreme next door.

“I go down to Gary’s barbecue and get barbecue whenever I can,” said Roberts, before bursting out in laughter. “That’s about as far away as I get.”

Roberts has traveled more than he might let on, but there’s no doubt that Salisbury is and has always been his home. At 70 years old, he’s seen the community change, and has been a part of that change himself.

After graduating from Catawba with a degree in business, Roberts worked for a decade at Food Town, which would become Food Lion, serving as the company’s financial officer as it grew from a community grocer to a regional powerhouse. Over the course of his life and career, Roberts collected stories about the place and people around him. Years after his mother-in-law suggested to him that he write a book about his life and stories, Roberts took her advice.

With the help of family and friends, Roberts wrote and published “Everybody Was Happy” in November 2019. The book was received well, becoming a hit with readers near and far and was printed for a second time in August.

The beginnings of “Everybody Was Happy” can be traced back to notes that Roberts wrote out on scraps of paper after he left Food Town when he was in his early 30s.

“I started thinking about it after I’d retired from Food Town and I would make notes here, there and yonder and then I’d stick them somewhere,” Roberts.

The problem, Roberts said, was that over time he’d lose track of where he’d put the notes. He tried speaking his tales into a dictaphone, but that didn’t work either. The book was stalled until he met writer Susan Shinn Turner when she was reporting on the death of Ralph Ketner, the legendary co-founder of Food Lion and Roberts’ former boss. The two instantly struck a bond and began to work to put Roberts’ thoughts to paper.

“She would come over once a month and we’d have lunch and then I would start talking and she would start typing on her laptop,” Roberts said.

Over the course of many months, a manuscript was produced. The book, which reads as if Roberts is sitting nearby, recanting the stories to readers himself, begins with stories of his childhood adventures and ends by exploring the relationship between famed actress Marilyn Monroe and Roberts’ uncle, who was her masseuse and confidant.

“It’s a fun read,” Roberts said. “It’s not heavy by any means and it covers a lot of topics.” 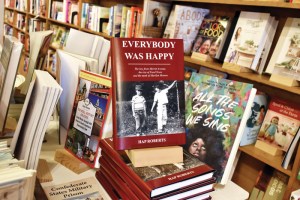 “Everybody Was Happy” has been one of the bestselling books this year at South Main Book Company. Ben Stansell/Salisbury Post

Alissa Redmond, the owner of South Main Book Company, said that Roberts’ memoir has been the store’s bestseller this year. “Everybody Was Happy” has consistently appeared on the list of the store’s top 10 sellers that Redmond writes on a queue outside.

While “Everybody Was Happy” is popular among locals who flip through its pages to learn about what it was like to grow up in Salisbury in the 1950s and 1960s, the book has also been sought out by readers who may not even be able to find Salisbury on a map.

“I got a message yesterday from someone in Wilson who wanted a copy of the book,” Redmond said. “I’ve shipped copies of his all over the United States. He really captured what it was like to grow up in Salisbury at a particular time. He has a large network of people who know and respect him and that’s how word was spread, but now there are people that maybe never lived in Salisbury and never met him who are reading his book.”

Surprised by the success of his book, Roberts wanted to give back. He decided several months ago to donate the future proceeds of his book to the Little Free Libraries of Rowan County. The libraries, which are scattered throughout the area, provide free reading materials to members of the community and children in particular.

“He’s such a great representative of Salisbury,” Redmond said. “With him giving back to the little free libraries and not taking a profit from the book at this point, that speaks a lot to the town of Salisbury and its people that everybody feels like it’s important to give back to the community.”

The proceeds raised by “Everybody Was Happy” will help Redmond fill the Little Free Libraries with math and science books.

Roberts has already given back to the community through his book, but he said that he hopes it will continue to inspire and inform readers for years to come.

“Susan and I tried to make the book such that it would be one that could be read by my grandchildren,” Roberts said. “It shows life back in the 1950s and it shows how a young company called Food Town Inc. that just about went bankrupt turned into the darling on Wall Street.”

“Everybody Was Happy” can be found at South Main Books or online at southmainbookcompany.com. It can also be ordered through Amazon.