With all ballots counted, Rowan improves on record turnout 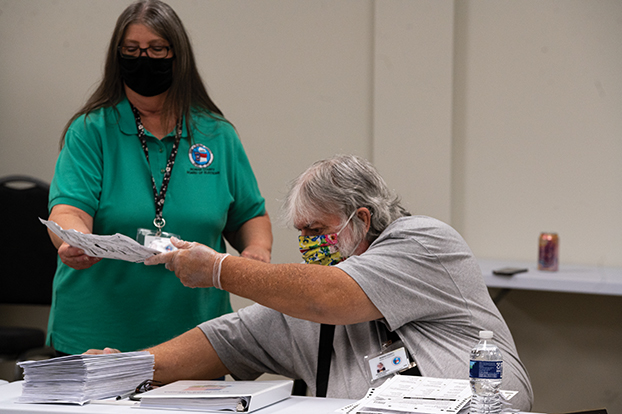 Josh Bergeron / Salisbury Post- George W. Benson, a member of the Rowan County Board of Elections, hands a crumbled ballot to Nancy Evans, the retired director, who has been brought out of retirement to help during the 2020 presidential election. The Board of Elections on Thursday counted remaining absentee ballots and considered provisional ballots, too.

SALISBURY — The last time Rowan County reached a 75% voter turnout rate was 1984, when Ronald Reagan was elected to a second term as president. And after counting hundreds more ballots Thursday night, the county beat that record.

Included in the absentee by mail ballots were two cure letters, which were resolved and ultimately counted. Those ballots had to be resolved due to a missing voter signature and an incomplete witness address.

Of the 175 provisional ballots accepted, 13 were considered partial ballots because those voters were not eligible to cast a vote in the state House race that they marked on the ballot, said Rowan County Elections Director Brenda McCubbins. But all other races on the ballot in which votes were cast were counted.

At the conclusion of the meeting, the county board of elections officially closed the absentee by mail and provisional ballot tabulators, meaning no more absentee by mail ballots will be accepted. The board will meet today at 11 a.m. to formally canvass the election. The state board of elections will update its voter history data and formally canvass the election on Nov. 24.

Despite the “very crazy election season,” McCubbins said she thinks everything went well.

“I’m very pleased with everyone that worked with us and for us,” McCubbins said.