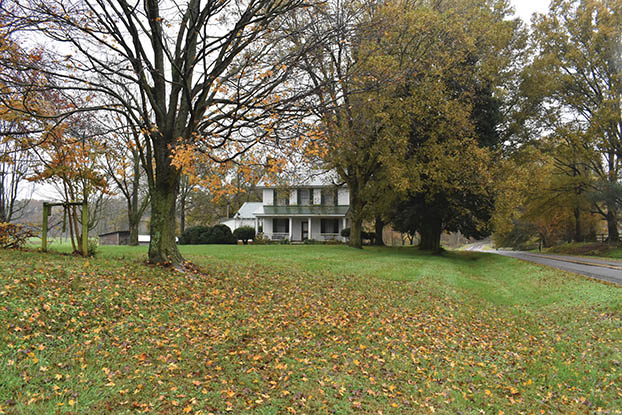 Built in the 1800s, the house that Ben Knox lives in is listed on the National Registry of Historic Places and was once his grandmother's home. Ben Stansell/Salisbury Post

CLEVELAND — Ben Knox was surprised when a pair of strangers turned up at his family’s farm several years ago after traveling far and wide to visit the rolling hills and open fields where they’d traced back their family’s roots.

“A couple got out (of their cars) and said ‘We’re from so and so and we know that our such and such granddaddy came from this place right here,’” Ben Knox recalled. “I told them, ‘Well boy that’s interesting.’ We talked for a good little while and I told them I’d be happy to show them around.”

It wasn’t the first time a far-off member of the extended Knox family had journeyed to set eyes and step foot on the roughly 1,400 acres of farmland in Western Rowan County managed by Ben, his brother Clark and their cousin Robert.

Established more than 250 years ago, the fields and fixtures of Knox Farm near Cleveland have become a bastion of the family’s history — a place relatives, both well-known and unknown, visit when they get curious about their past.

“I think people connect to it,” Robert Knox said. “I think it’s the glue that holds it together, really.”

For Ben, Clark and Robert, the farm isn’t a sacred place they visit when they get a wild hare to discover their past — it’s home, where they’ve raised crops, livestock and their families. 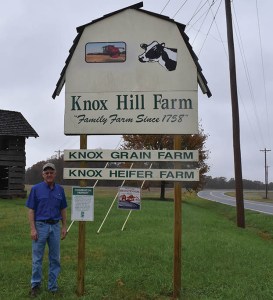 The Knox farm was recently recognized as one of North Carolina’s bicentennial farms, another historic honor for a place where the history is as rich as the soil. The farm is the oldest of five bicentennial farms recognized in Rowan County. Knox farm will be highlighted during Farm-City Week, a now-virtual celebration hosted from Nov. 16-20 by the Rowan County Extension Office.

The origins of the farm can be connected back to John Knox, an immigrant from Ireland who traveled to Pennsylvania in the early 1700s before settling on 600 acres of land in the North Carolina Piedmont.

Although the farm is now officially acknowledged for lasting 200 years, it’s closer to three centuries old because John Knox’s original deed was dated 1758. To be recognized as a bicentennial farm, the Knox family had to submit paperwork and documents to prove how old the farm is and the fact that it has been continuously farmed.

Fortunately, over the years, relatives have kept detailed records of the farm and the family. Some of those records, Ben Knox said, are kept at the Center for the Study of the American South in Chapel Hill.

“It’s a great thing and I’m so glad that they went through the paperwork to get it done, said Amy-Lynn Albertson, the director of Rowan County’s Cooperative Extension.” That’s the main reason why a lot of farms don’t get recognized is a lack of paperwork and the Knox family is really lucky that they have historical references in their hands. That’s a real blessing for them.”

As part of the eighth generation to farm the land, Robert Knox said that he is proud to be a link in the long chain of family agriculturists.

“The thing that makes me the proudest of the bicentennial or the length of time that the farm has been here is that it’s been continuously farmed by our family,” he said.

When Robert and Ben Knox went to college at North Carolina State, they both believed, at least for a split second, that they might be the ones to break that chain. After years of waking at dawn to milk cows before school and coming home to milk them again, both Ben and Robert said that they wanted for a time to leave the demanding life of farm work.

“I remember growing up, when I went to college, I thought ‘I am glad to get away from there,’” Robert Knox said.

But soon, the only thing Robert and Ben wanted to do was go back. And They’ve been minding the land since, raising soybean, corn, barley, wheat and assorted livestock, including dairy cows, a few black angus cattle and sheep.

As Robert and Ben have worked the land, they’ve uncovered tokens of the farm’s bountiful history, finding buried arrowheads and discovering dilapidated wells. The two reminisce over days of their youth spent on the farm, when they’d steal homemade cookies and pickles from their grandmother’s house, the same house that Ben Knox now lives in that is listed on the National Registry of Historic Places.

The farm may be deeply and firmly rooted in history, but that doesn’t mean Ben, Clark and Robert have been reluctant to introduce new farming tactics, including transitioning from tilling the soil to no-till in the 1970s.

“The no-till movement has been promoted since the early 70s as a great practice and the Knoxes were definitely early adopters,” Albertson said. “We’ve learned how much that preserves soil health and conserves water runoff and prevents erosion.”

By avoiding the use of heavy, disruptive machinery and instead opting to implement cover crops and light herbicides, the Knox family rebuilt the rich, productive soil systems that help their crops grow today.

“We might have some of the oldest no-till land in Rowan County. That’s just been a major improvement,” said Ben, who serves on the N.C. Soil and Water Commission. “It took about three or four years before it got its old structure back. That makes it better and it keeps getting browner and better from the top down.”

Despite receiving offers “almost every day” from parties interested in buying parts of their land, Ben and Robert have no plans to sell their property. Portions of the farm have even been turned into conservation easements, which preserves the land from major development in perpetuity.

“They’re definitely role models for the county for working to preserve farmland and hold on to that heritage and really have so much pride in their history in the county and farming,” Albertson said.

The next generation of Knox family farmers are already living on the farm. Robert’s two sons, Luke and Jacob, have both established themselves on the land and plan on continuing to grow crops and the family’s legacy.

Farm-City Week events will be hosted virtually and Albertson encourages people to use the hashtag #FarmCityWeek to show appreciation for local farmers and producers.

More information about Farm-City Week or other agricultural topics, contact the Rowan County Extension Office at 704-216-8970.