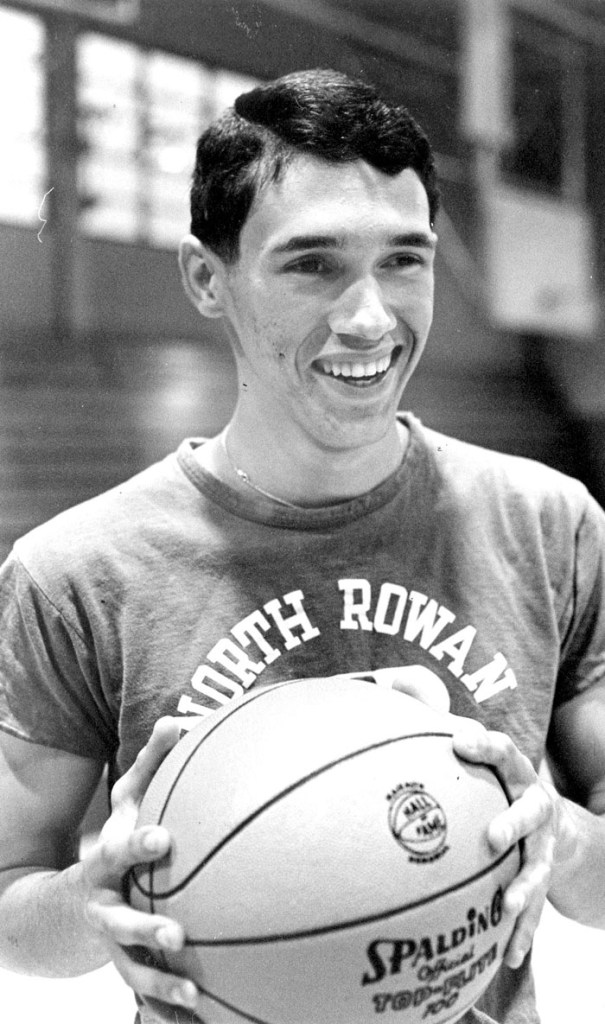 Craige, who was 69, owns a permanent place in Rowan County’s high school basketball lore as the first 1,000-point scorer for the North Rowan program.

Craige was a bomber, a shooter who played long before the installation of the 3-point line. His final total was 1,070 points in three seasons. With the 3-point line, it’s safe to say it would’ve  been much higher.

A streaky guard, Craige firmly believed his next shot was going in. In a North Piedmont Conference tournament semifinal his senior season, as he was closing in on 1,000 points, he was a dismal 4-for-22 from the field after three quarters. But he didn’t get discouraged. He kept firing, got hot, made five of his last seven, and sparked the Cavaliers to a victory against Mooresville.

During Craige’s sophomore season, 1966-67, the basketball program’s fortunes sank to one of the lowest points of coach Walt Baker’s long tenure. But Craige had the last word.  He would go out with a triumphant senior year, leading the Cavaliers to their first 20-victory season.

North averaged just 47 points in 1966-67, losing by an average of 15 per night. North was 2-18 and finished ninth in the nine-team North Piedmont Conference, failing to qualify for participation in the league tournament. Craige had games of 21, 20 and 19 points, but it wasn’t enough. He averaged 11.7.

The Cavaliers pushed back toward respectability in 1967-68. As a junior, Craige averaged 14.6 per game and got a lot of scoring help from Bobby Hutchins. North beat Boyden opening night and started out 5-1 before settling for 9-12 overall and sixth place in the conference. Craige topped 20 points five times that season, with a high of 25.

Craige entered his senior year with 530 career points, at a time when 400 points was considered a monster season. He wasn’t given much chance of threatening 1,000. But Craige would pour in 540 points as a senior, averaging 21.6 in 25 games. He was the leading scorer in the NPC.

A lot changed for the Cavaliers in 1968-69 with the arrival of 6-foot-3 freshman James Henderson. Henderson averaged 12.8 points and started on his way to the school career scoring record that still belongs to him. Just as importantly for North, there were nights when Henderson got 20 rebounds. North also got strong seasons from senior Tim Grubb and junior Kenny Stoner. They combined for 21 points per game.

On opening night, Boyden smashed the Cavaliers with a second-half press and won 81-49. Craige scored a career-high 32 of those 49, including 20 in the first half.

Craige scored 31 in an 80-65 win at North Iredell. He tossed in another 31 in a 73-71 loss to a Davie County team led by Jingles Ijames, Ronnie Shoaf and Hubert West. Davie was the NPC’s strongest team during the regular season. The Cavaliers’ only two NPC setbacks came against Davie.

North Rowan was 16-4 in the regular season. Boyden and Davie were the only teams that beat the Cavaliers.

In the snow-delayed NPC tournament played in Mocksville, the Cavaliers took care of East Rowan in the first round. Mooresville was next, with Craige closing in on 1,000 points.

North Rowan had expected to face Davie in the championship game, but Davie was upset by North Stanly’s Comets. Against the Comets, Craige was 2-for-10 at halftime, but then he found it. He was 7-for-10 in the second half, scored 23 and North Rowan took a 66-60 victory and the tournament championship.

In the Bi-Conference Tournament that came next, North posted a tremendous win against A.L. Brown at neutral Davie, beating the Wonders, who had won back-to-back 1967 and 1968 WNCHSAA championships and had reloaded. It was a 71-67, double-overtime struggle. Craige scored 27, including two critical buckets in the second overtime.

On March 11, 1969, Craige played his final high school game. North fell to Boyden for the third time, but this time it was a fight — 59-55. Henderson had four fouls at halftime and Boyden’s Charles Lynn shot 11-for-11 from the floor and scored 30 for the eventual WNCHSAA champions, but it was still a tussle. Craige scored 23 to finish with a 540-point season and 1,070 career points. He scored 20-plus in his last seven games. North, 2-18 in his first season, went 20-5 in his last one.

Craige went on to play at Capital University, a strong program in those days, in Ohio. He lettered and played on a championship team before coming back home to Catawba.

He found a role off the bench as a zone-busting shooter for very stout Catawba squads that featured all-time greats such as Lynn, Bill Bailey and James Brown. There were still nights when Craige would get hot. Several times he had the distinction of putting Catawba over the 100-point mark. One of them was the November 1972 game against Shorter when the Indians made 53 field goals, a school record that still stands.

Craige worked for Duke Power at the Buck Steam station for many years.

He also served as alderman and mayor of East Spencer. His father had been mayor of the town before him.

Craige’s children included a daughter, Crystal Craige, who was an all-county basketball and volleyball player for the Cavaliers. Like her father, she was an important part of a dramatic rise in North’s roundball fortunes — from 1-23 to 20-6.