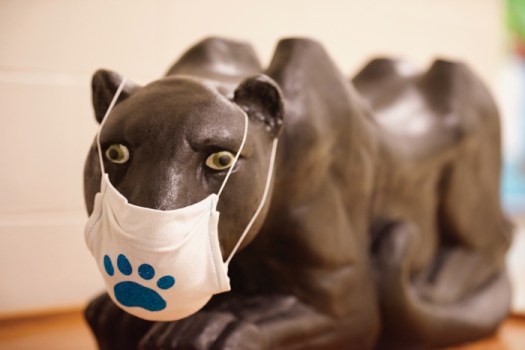 The Salisbury native was a national leader in civil and women’s rights as well as education. Among other things, Koontz served as the sixth director of the U.S.  Women’s Bureau under Richard Nixon, the first African-American president of the National Education Association and assistant state superintendent.

Koontz Elementary School was named in her honor. But like many schools that bear the names of historic figures, students don’t know much about the namesake.

That might change at the school after renewed interest in the mascot and after students at Koontz voted to name the school’s panther mascot “Lizzie” in honor of Koontz. 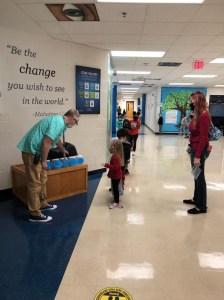 Photo submitted – Koontz Behavioral Specialist Alan Hand guiding students as they vote on the name for the school mascot. The school announced the name to students on Tuesday.

The renewed interest in the mascot is thanks to the school’s new mural of Lizzie emblazoned on a wall near the front entrance. Shane Pierce, a local artist who paints under the name Abstract Dissent, completed it over the summer. Pierce’s murals can be seen around town and in a number of local schools. And during the first week back in school, it was all the students could talk about

Koontz counselor Kelly Fisher and Behavioral Specialist Alan Hand both hailed the quality of the mural and noted how excited everyone in the building has been to walk past it every day.

“That really re-energized the whole school about the panther,” Hand said.

By voting on a new name, kids were engaged during election season. It started with a hype video based on a fairytale wherein the panther wished for a name. Each class voted on a name. Then every grade level voted. Finally, the entire school made its decision from each grade level’s choice.

Fifth grade came up with the winning name, but there were was a group of third graders who wanted to call back to the school’s namesake as well.

Third grade teacher Kelda Gehrig had a group who pushed for a reference to Koontz.

“My B group, they’re the kids who come Thursday, Friday; they’re all girls,” Gehrig said. “So they have this girl power thing.”

The kids asked if the panther had to have a male name; Gehrig said it did not. She said she wanted to push the kids toward a meaningful name for the panther rather than something unrelated like “Bob” or “Sushi.”

Gehrig introduced Koontz to the kids, and they were impressed someone local had such an impact. They rejected Duncan and went with Lizzie instead.

“I think that it helps them have a lot of pride in the school,” Gehrig said, adding it helps take ownership and be excited about school.

“It’s so important to try and get our students engaged,” Fisher said. “And that’s why we feel so strongly about the committee that we chair.”

The school’s longtime representation of its mascot, a statue, also got a fresh coat of paint.

Koontz began her career as an elementary school teacher in Harnett County. She was the first Black president of the National Education Association and worked for disadvantaged children and school nutrition programs. She worked against discrimination while she headed the Women’s Bureau.

Koontz retired in 1982 after serving as assistant state superintendent for seven years. She died in 1989.