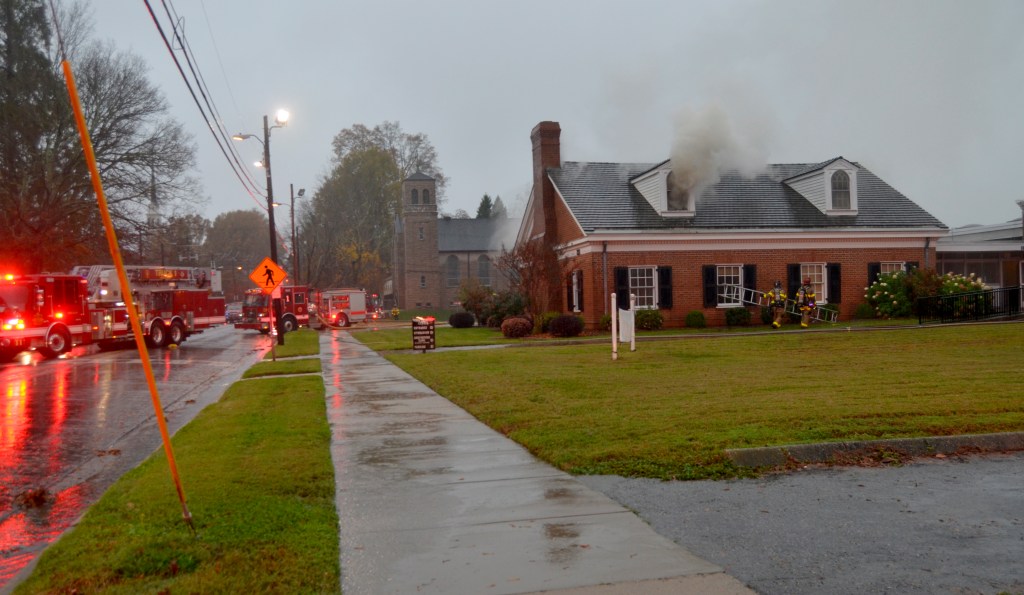 Firefighters respond to this fire at the First Baptist Church Ministry Center at North Fulton Street. The fire was contained to the building and is believed to have started in the attic area. Shavonne Potts/Salisbury Post

The building, known as the “old YMCA,” is located across from First Baptist Church on North Fulton Street. It housed several ministries and organizations, including the SOAR program, which helps adults with intellectual disabilities, and the Good Shepherd’s Clinic.

No one was inside the building at the time of the fire, said Associate Pastor Brian Farmer. But Farmer said a witness heard a boom of thunder right before the fire.

Salisbury Fire Marshal Terry Smith said the fire was accidental due to a power surge in the area, likely lightning, which struck an electrical outlet on a wall. The fire originated and was contained to an attic area of the building. There was smoke and water damage throughout the rest of the building.

Farmer stood outside under an umbrella until firefighters gave the all-clear to approach the building.

“This building is a tool for ministry. God does a ton of great things through it,” Farmer said. “We’ve been blessed with good space here and it’s used quite a bit. This is going to be an inconvenience and we’ll have to rebuild it but the ministry is not going to stop. It’s my hope that this building, what’s not been damaged by the fire, will be back up and running soon,” Farmer said.

Salisbury firefighters could be seen breaking windows and creating a hole in the roof to vent the building. Smoke billowed from the attic area.

The church posted a message on its Facebook page shortly after the fire that said, “The fire seems to have started in attic, but no official determination has been made yet. No one was in the building, and our awesome fire department was able to contain and extinguish the fire quickly. We are grateful God had someone in place who saw the smoke and reported the fire immediately.” 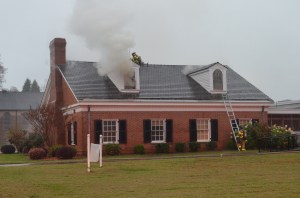 Firefighters respond to this fire at the First Baptist Church Ministry Center at North Fulton Street. The fire was contained to the building and is believed to have started in the attic area. Shavonne Potts/Salisbury Post

The Salisbury Police Department also provided assistance at the scene. Kannapolis Fire Department personnel also assisted so that all of the responders could focus their efforts on the fire, Smith said.