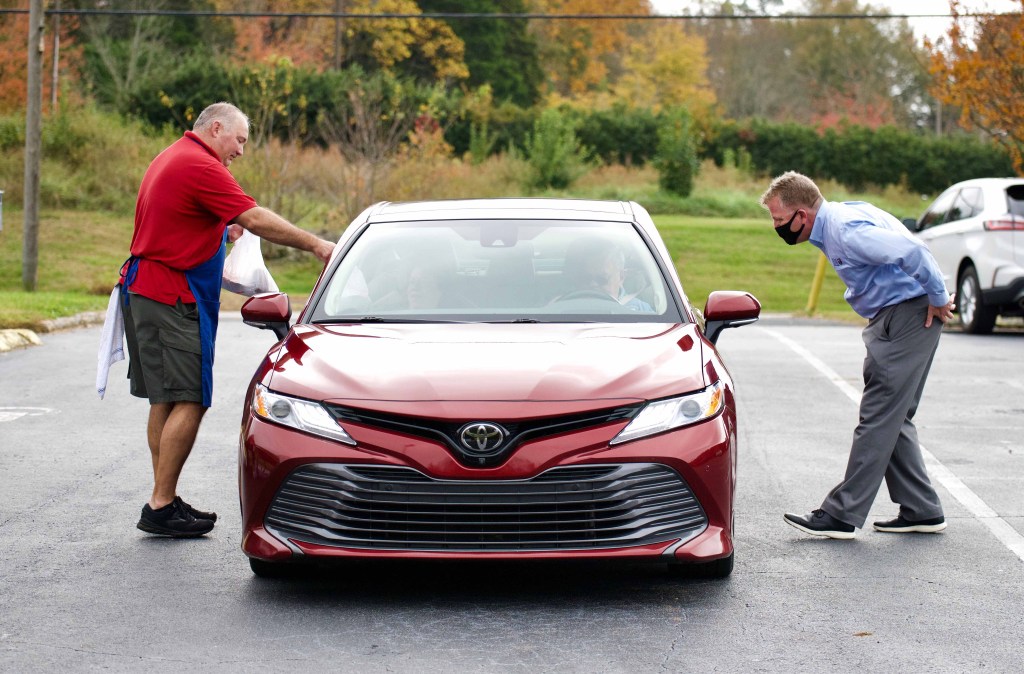 SALISBURY — Not even a pandemic can stop Veterans Day traditions for Powles Staton.

The funeral home has a reputation for serving the families of veterans and sponsors veteran lunches throughout the year. This time around, the funeral home, in collaboration with the Rowan County Register of Deeds and Sheriff’s Office, returned to the Harold B. Jarrett American Legion for the fourth year to serve up barbecue chicken to any veteran who wanted to come.

Like a similar lunch held at the Elks Lodge in May, the funeral home had to adapt the lunch to a pandemic and moved it to a drive-thru format. The funeral home has the format down pat, but the hope is to eventually return to sit down meals and fellowship.

Cars filtered through the parking lot and meals were handed off.

Louis Chambers Jr. served in the Air Force for a decade. His father, Louis Chambers Sr., served six years in the Army. They came together for the lunch. Both discharged as sergeants and said the military helped them mature and meet good people who they served with and are still friends with today.

They’ve both come to the lunch event before, and said Tuesday that it’s a good way to honor veterans.

Powles Staton foots the bill for the food. The Sheriff’s Office comes out to cook and serve.

The funeral home was also collecting retired flags to use in veteran cremations. Roakes said a veteran will be draped with a flag before being cremated, which serves as a last honor for that flag as well. The funeral home will take a couple stars from the flag to put on a certificate for the family.

Roakes said any weathered flag, even if it’s faded or has some rips, is appropriate for a donation.

The funeral home was also collecting donations for its Operation Toy Solider Program. It collects new toys throughout the year and works with the North Carolina National Guard to distribute toys to children.

Roakes said that program has been running for five years and this year is expected to top 25,000 toys total for the history of the program

“Rowan County citizens have been amazing for that project,” Roakes said.

Tuesday was the last meal for the year, and the funeral home’s next event will be held in conjunction with the Sheriff’s Office outside of Walmart collecting toys for the program.