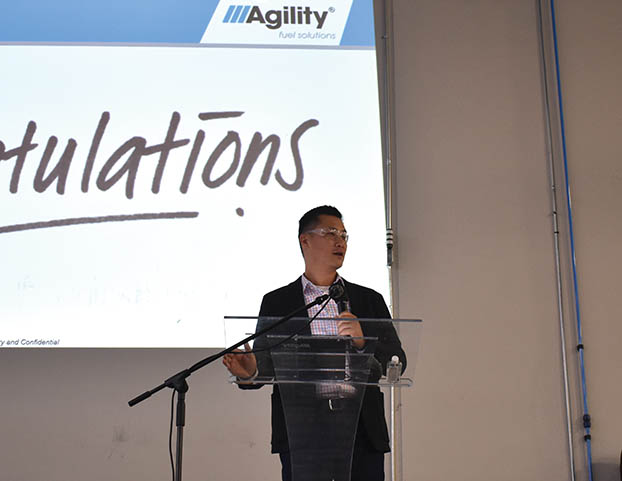 SALISBURY — When Agility Fuel Solutions held the grand opening for its 204,000-square-foot facility in Salisbury in 2015, the massive new building was devoid of equipment and activity.

It was so barren that the company’s President Seung Baik, who was chief legal officer at the time, said in jest that their leadership team could’ve played an entire game of football in the cavernous room.

As Baik delivered that remark on Tuesday afternoon, he was standing in the once-empty facility overlooking hundreds of socially-distanced employees and a room full of machinery. As Baik came back to speak at the five-year anniversary celebration, he didn’t see much space left to toss around a pigskin this time.

The 200 or so workers currently employed at Agility Fuel Solutions’ Salisbury facility work to outfit trucks, buses and other heavy duty commercial vehicles with compressed natural gas and other fuel systems that serve as more environmentally friendly alternatives to diesel. The site was the California-based company’s first vertically integrated North American manufacturing facility and remains its newest location.

To speak at the five-year anniversary, Baik boarded a plane in California for perhaps the first time since the COVID-19 pandemic began and flew across the country.

“For our president to get on the plane for the first time in months and come across just for this event means a lot,” said Bryan Mewhort, the facility’s director of operations. “It means a lot to (the employees). It means a lot to me.”

After delivering his remarks, Baik presented Mewhort with a plaque honoring the 30 employees who have worked at the site since its inception a half decade ago. Of the 60 or so employees originally hired at the site, Mewhort said that he is impressed with how many have stayed on with the company.

“I’m hoping it was a big day for them,” Mewhort said. “It should have been.” 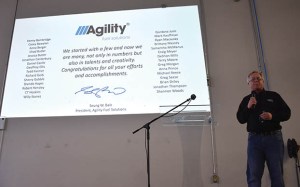 The employees who have worked at Agility Fuel Solutions since the facility opened were honored during the five-year anniversary celebration. Ben Stansell/Salisbury Post

Baik said that the company considers the Salisbury location to be its “showcase” facility and that he is pleased with the way the site has stepped up to meet higher demand for the company’s fuel systems.

“Our business has grown incredibly over the last two years and this place has filled up to meet that demand and there’s still room for more here,” Baik said.

Success at the site wasn’t always guaranteed. After Agility committed to building the facility, the company’s expectations for a bright future were temporarily tapered when the price of gasoline plummeted as a barrel of oil that was trading at over $100 dropped to around $20, Baik said. Since the company’s success at that point was dependent on the expense of oil at that time, that created a problem.

“In that 10-month time period between planning, deciding and grand opening, there were some tumultuous economic events that happened with oil prices,” Baik said. “… We held firm. Instead of abandoning our plans, we forged ahead and went for it and we were gulping pretty hard when this place opened five years ago thinking how we had spent a lot of money opening the facility, but deep down inside every member of the management team held firm that we were going to come through in the end.”

Now, Baik said, the company is once again on an upward trajectory, is no longer dependent on the price of oil and is expected to increase profits substantially in 2021. 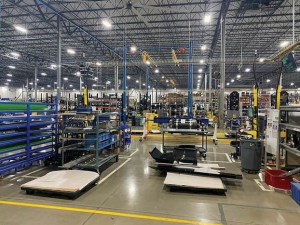 The inside of Agility Fuel Solutions’ Salisbury facility has filled up to meet demand in the five years since it opened. Photo submitted.

Rowan County Board of Commissioners Chairman Greg Edds attended the five-year celebration on Tuesday and said he remembers commemorating when Salisbury landed the company five years ago.

“I’d have to say, looking back over all of the economic development wins we’ve had, this one is really the first that began to set the tone,” Edds said. “This one was an emotional get. It was our first one and they became such a team player that right after that, we began to really see a big turnaround in the number of prospects coming through Rowan County.”

Although Rowan Economic Development President Rod Crider wasn’t yet hired when Agility decided to build in Rowan County, he, too, points to the company’s arrival as a major part of the county’s success in recruiting new businesses, including Amrep, a garbage-truck manufacturer that is one of Agility’s customers.

“A lot of the momentum we’ve enjoyed over the past five years started with them locating in Rowan County,” Crider said.

After five successful years, Baik said that the site is now poised for more growth.

“If the business continues growing as we’re thinking it will for next year and beyond, we can see adding more footprint and capabilities and expanding significantly,” Baik said. “We do have enough land out back where we can expand so we’re in the very early stages of discussing it to see if that’s a feasible idea.”

Baik also said that Agility Fuel Solutions will undergo a rebranding in 2021 and will take on the name of its parent company, Hexagon Composites, which purchased the company several years ago.