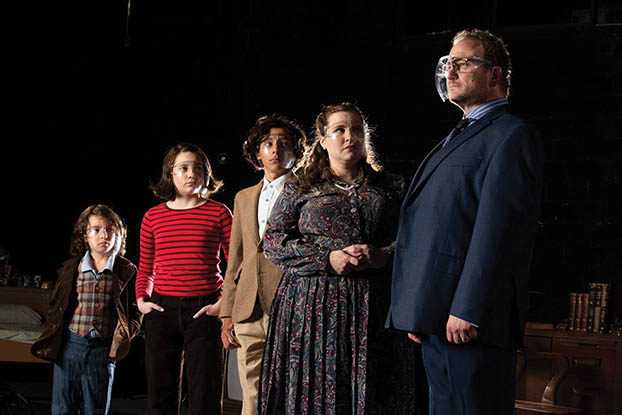 The cast of "Fun Home" will wear face shields during the performance to protect themselves and audience members. Photo submitted.

Although “9 to 5: The Musical” was scheduled to be the theater’s first live performance since the COVID-19 pandemic began, a small outbreak among cast members forced the production to cancel live performances and offer an online version of the musical.

After reassessing and reinforcing its health and safety protocols, Lee Street theatre decided to move forward with “Fun Home,” a Tony-award winning tragicomedy that details the coming of age and sexual discovery of cartoonist Alison Bechdel. The musical, which was the first Broadway musical with a lesbian protagonist, will feature adult themes.

Maryella Rosko has waited months to perform in front of a live audience again and is thrilled to play the role of “young Alison” on Friday night.

“I live off of theater and I need theater, so to do this show has been great,” Rosko said. “I’m so excited because I love doing theater. This is a really great show with a great cast and Rod (Oden) has been a great director.”

Not only has the small cast of “Fun Home” followed safety protocols during rehearsals, but they’ve also taken steps to ensure that they remain safe and virus-free outside of the theater.

“Even outside of the (theater), they’re very aware of the circles they’re in and the events they go to so they don’t expose the cast to any danger,” said Rod Oden, Lee Street’s executive director and the director of “Fun Home.”

During the show, cast members will act and sing while wearing the same face shields they’ve worn during rehearsals. Rosko said that the cast has grown accustomed to the face shields and that she believes the audience will get used to them too as the show goes on. 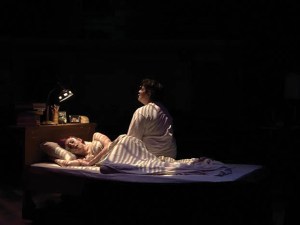 “Fun Home” Director Rod Oden said that he has changed some of the interactions between the play’s cast members to further minimize the risk of transmitting COVID-19. Photo submitted.

Audience members will be required to follow safety protocols. Upon entering the theater’s doors, patrons will be temperature checked and will be asked to wear a face covering. The show will be done in a “three-quarters” format, meaning that audience members will be seated on three sides of the stage. The seating arrangement, Oden said, is ideal for social distancing.

“The big thing is that we’ll have a heightened awareness of social distancing in the building,” Oden said. “We’ve spent a great deal of time preparing for the last show and now into this show creating a seamless process that will not be an intrusive process for the patron.”

As for eating and drinking during the show, Oden said that “anything people do in a restaurant now is what they’ll do in the theater.”

Although Lee Street theatre is the first local production company to host an in-person performance since the COVID-19 pandemic began, Oden said that theaters elsewhere in the state have had successful runs.

“There are already theaters regionally that are attempting reopening and have,” Oden said. “I know for a fact that Old Courthouse Theatre just opened ‘Clue’ last month. They ran a show in person and they did a great job. I had the privilege of talking with a lot of people over there and some of their people were in ‘9 to 5’ and we’re all sharing this information and resources to make all of our productions successful and safe for both patients as well as performers.”

Oden said that “Fun Home” represents “a return to normalcy” for theater goers and performers.