Kannapolis City Schools nurse named No. 1 in the state 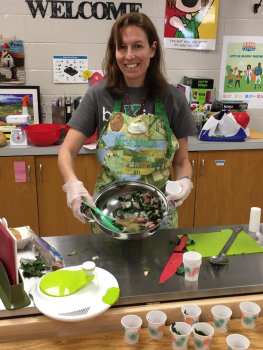 Photo submitted - N.C. School Nurse of the Year Abraya Johnson performing a cooking demonstration for a class. Johnson uses produce from the school's gardens and even sends some vegetables home with students for families to try. 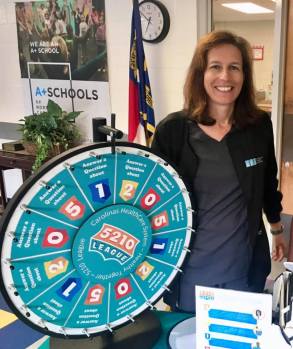 Photo submitted - Abraya Johnson posing with a wheel for the 5210 league, which encourages families to, per day, eat five servings of fruit and vegetables, have two hours or less of screen time, an hour of physical exercise drink no sugar sweetened beverages.

KANNAPOLIS – For most of her 27-year career, Abraya Johnson has not been a school nurse.

She dipped her toe into the specialty 20 years ago, when school nursing was a much different world. She was more focused on putting on bandages than on home and community preventative health that makes up much of what she is doing these days. Still, out of thousands of school nurses in the state, Johnson last week was named School Nurse of the Year by the N.C. Association of School Association of nurses.

She started working for Kannapolis City Schools five years ago and has spent most of her time at G.W. Carver Elementary School, a far cry from her initial experience with school nursing when she was moving between three schools with a total of 2,000 students.

In that setting, Johnson said, she did not get to know all the people at the schools and their families. She was not as involved in their care as she, and school nurses are now.

“I feel like I’m much more involved in the families,” Johnson said.

Johnson serves on the executive board for the association that gave her top honors. But the fact that she was No. 1 was almost mentioned to her in passing after a meeting. Winning the award, she said, does not come with many perks.

“Just the goodness of knowing,” Johnson said, adding she was given a nice bouquet during a staff meeting.

KCS Superintendent Chip Buckwell said it is hard to describe how important Johnson is to the kids.

Buckwell said Johnson is involved with several health initiatives within the schools and that she is much more than a nurse.

Johnson said she has a slightly different approach after not spending her career in schools. Before she came to KCS, she was working with adults with hypertension and diabetes. She’s carried some of that with her, placing a focus on community health and and preventative care. She does a lot of case management work with students who have chronic illnesses.

A big difference maker for getting involved with families is letting them know she cares about their children.

“I’m not just referring them for one thing to do,” Johnson said.

She is also bilingual, speaking English and Spanish as needed to connect with families.

“It’s huge to be able to just pick up a phone and call a parent directly to address an issue,” Johnson said.

Johnson can still call on first-hand experience about how frustrating having to go through an interpreter can be because some families at the school speak languages she does not. If she is speaking directly to a family, she knows she is getting across what she wants to say.

All of the nurses in KCS are coordinated through Cabarrus Health Alliance. CHA Assistant Director for School Health Alice Lutman said being bilingual is helpful not just for Carver Elementary, but for CHA as a whole; Johnson can help bridge gaps in other areas. Lutman said things can, at times, get lost in translation.

“Most people don’t understand how much the school nurse is involved,” Lutman said, adding about 25% of students have a chronic health condition that requires intervention at school.

School nurses handle a litany of student health problems as well. Some students have nutrition and weight issues, some are living with diabetes, asthma and other issues all over the map.

“She has a servant’s heart and she really cares about her students,” Lutman said of Johnson.

Johnson said diabetes is one of the bigger issues, and she has to work with families to help get a student’s blood sugar under control.

How that happens is a mix of education and connecting them with services they may need.

“I can’t tell you how many times I see kids with asthma,” Johnson said, adding sometimes students will come in who are wheezing and may or may not have a diagnosis. She then works to help get them on a medication so it can be better controlled.

On the preventative side, Johnson works in the school’s garden and performs cooking instructions in classes. She will sometimes send produce grown there home with students so families can try them. These days, she is also video conferencing with families to help connect them with food services as well as working in the school pantry.

“Having good health is a commitment on their part too,” Johnson said. “I feel like working with these kids I have the chance to catch them earlier in the game and help them be the healthiest they can.”

Lutman compared helping a family get proper care to taking layers off an onion, and that as you peel back layers sometimes there are more issues below the surface. Nurses try to meet all those needs.

“I would say a school nurse is one of the most resourceful people you meet,” Lutman said.