Political Notebook: What happens to campaign signs after elections? 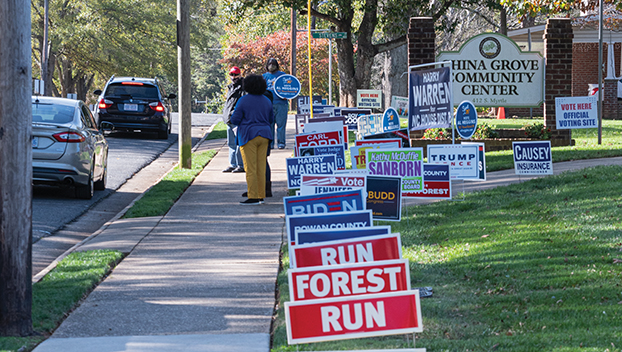 SALISBURY — While Republican incumbents Sen. Carl Ford and Rep. Harry Warren were happy about their victory Tuesday night, the two noted their next steps wouldn’t be catching up on sleep or resting. Instead, the next dreaded step involved the collection of the hundreds of signs their campaigns put up all across the county.

While some candidates may opt to keep the signs, repurpose them or reuse them in future elections, many have no place else but the trash as many of the signs aren’t recyclable. Rowan County Democratic Party Chair Geoffrey Hoy said hardly anything in a typical campaign sign is recyclable.

“The trash will get a lot of stuff,” he said. “My trash can at home is already full (of the signs).”

Hoy said that while the approximately 800 Biden/Harris signs that were distributed throughout the county were paid for by the presidential campaign and didn’t require any of the county party’s money, the prices of other campaign signs run about $5 each. Some can cost as much as $12 per sign, especially in the final months leading up to an election.

The metal stands used for the signs, which can be recycled or repurposed for future years, can run cost about $1 each, which adds up.

While the waste is unfortunate, Hoy said it comes down to a question of “how valuable is democracy?”

“This is the price of democracy,” he said, adding that American elections provide an opportunity for industries to make money off political campaigns.

Rowan County Republican Party Chair Don Vick said some Republican incumbents save their campaign signs or request that the party hold on to them. For example, Vick said that Josh Dobson, the Republican candidate for the state’s Commissioner of Labor race, asked the party to hold on to his signs.

He also said that some cardboard signs, including Dan Forest’s, the Republican candidate for governor, can be recycled. Any that aren’t cardboard or able to be reused for future elections are trashed, Vick said.

Vick also said local Republicans distributed more than 1,000 Trump/Pence signs in the county. And like the Biden/Harris signs, the Trump/Pence campaign signs were also provided at no cost to the local party because they’re paid for by the presidential campaign.

Keith Townsend, the Democrat who was unsuccessful in unseating Rep. Julia Howard in the state House District 77 race, is among those hoping to repurpose signs for another use. While he’s in the process of gathering up the approximately 300 signs he distributed across Rowan and Davie counties, he said one woman in Davie County told him that she may request some signs to paint over and use for another purpose.

Warren said he and his campaign distributed about 540 campaign signs across the county, which includes some reused from past elections. He added that signs often bear all sorts of weather conditions and are made to be used more than once.

Nonetheless, all candidates agree it’s best to collect all campaign signs in the week or so following the election.

“If you want to leave a good impression with the populous, you want to get them up as soon as you can,” Warren said, adding that it leaves a negative impression if they remain out months after the election.

Townsend echoed the same sentiment and said that it’s each candidate’s responsibility to ensure they’re collected.

State law allows the public to keep campaign signs displayed for up to 10 days after the election, but then it’s up to the candidates and their campaigns to collect them. After an additional 30 days, the state considers uncollected campaign signs to be abandoned property, which can be legally picked up and disposed of.

Additionally, Vick said there’s usually an understanding among each party that candidates collect their fellow party’s campaign signs, too, if they can.

Following the election, McCubbins told the Post that about 1,750 absentee by mail ballots had been requested but not returned to the county board of elections. And in a statement from the state Board of Elections on Thursday, it was stated that 441 provisional ballots had been reported in Rowan County.

On Friday, McCubbins said that only about 200 of the provisional ballots would be approved. Even if there are problems with a voter’s registration they may be allowed to cast a provisional ballot, but the bipartisan Rowan County Board of Elections ultimately has the final say on whether the ballots are valid.

McCubbins said more ballots may continue to come in, but it’s unlikely there will be many more.

Remaining absentee by mail ballots will be accepted during a virtual board of elections meeting Thursday at 5:30 p.m. A meeting to finalize the election in Rowan County will occur Friday and full voter history will be uploaded after the election is canvassed on Nov. 13.

In North Carolina, absentee by mail votes can be counted until Nov. 12 as long as they’re postmarked by Nov. 3.

SALISBURY — Across the state, voters have flooded local county boards of elections with questions concerning whether their vote was counted in the 2020 general election, according to the state Board of Elections Executive Director Karen Brinson Bell.

But Bell and other elections officials ask that the public be patient at this time as the state will officially canvass the election and update its voter history on Nov. 13.

“If you voted in-person and inserted your ballot into a tabulator, your selections were immediately recorded on a memory card, and your votes were reported on election night as part of the unofficial results,” Bell said in a statement last week. “We respectfully ask that voters trust their bipartisan boards of elections across North Carolina. We are here to make sure your votes count, and they will.”

Bell added that in almost every single case, the answer to whether a vote was counted would be “Yes.” But it takes time to upload voter history, which reflects that a voter’s vote was indeed cast.

Voters can confirm the status of their ballot by using the state Board of Elections voter search tool at vt.ncsbe.gov/RegLkup/. If a vote was cast on Election Day, it was reported in the election night results.

The state board also said in a statement that it would not know how many voters with outstanding absentee ballots voted on Election Day until after the county boards of elections complete their regular post-election tasks during the canvassing period. The state added that about 31,900 eligible ballots arrived at county boards of elections over the past few days, but those envelopes have not yet been scanned in and officially approved by the county boards.

“Please be patient as your county boards of elections work extremely hard to ensure all ballots are counted and results are audited and certified,” Bell said. “With these options, voters can have peace of mind that their voice was heard in this election.”

HIGH POINT — A new poll conducted by High Point University found that registered voters in North Carolina are uncertain about taking a COVID-19 vaccine if one were to be developed this year.

The poll was conducted between Oct. 9 and Oct. 28 among 800 registered voters across the state. While 37% of the respondents answered “yes” to the question, “Do you intend to receive a COVID-19 vaccine if developed this year,” 36% answered “no” and 27% said they didn’t know or refused to answer.

“Registered voters appear to be a bit wary of a new COVID-19 vaccine if developed this year,” said Brian McDonald, associate director of the HPU Survey Research Center and adjunct instructor, in a statement about the results. “This is an issue worth exploring in the coming months if vaccines become available and COVID-19 continues to play a large role in our lives here in North Carolina.”
Overall, however, most registered voters seem relatively well-informed about the development of a COVID-19 vaccine. More than nine out of 10 respondents, or 92%, said they’re aware a vaccine is being developed, while only 4% were unaware of the vaccine development.
The poll also asked registered voters questions related to the flu. While half of those respondents said they had already had a seasonal flu vaccine this year, 49% said they had not.
Additionally, 62% of those respondents acknowledged that they are concerned about becoming sick with COVID-19, while 30% say they’re not concerned.
“For the 49% of respondents who have not yet received a flu shot for the 2020-2021 season, it is not too late,” said Dr. Jordan Smith, assistant professor and co-curricular coordinator in HPU’s Fred Wilson School of Pharmacy, in a statement. “Flu season typically peaks between December and February, so getting a flu shot now will help protect against the virus. This year, given the COVID-19 pandemic, it is important that we protect ourselves, our loved ones and our community against influenza so that our healthcare services and facilities are able to handle the burden of an increasing COVID-19 caseload.”