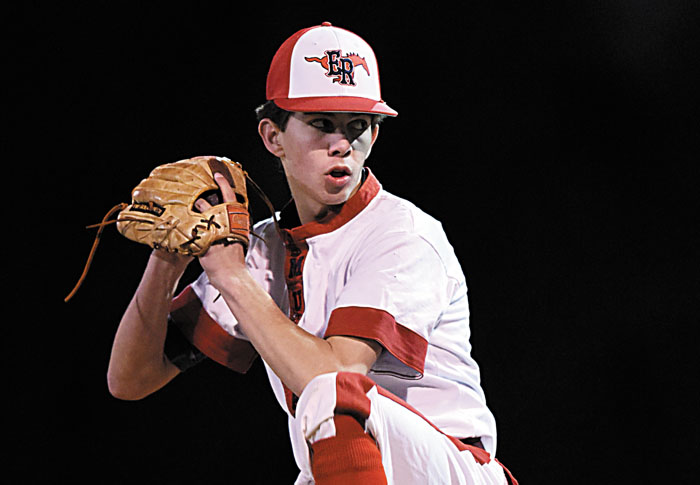 Three members of the Mustangs’ powerful pitching staff — senior Jake Hunter (East Carolina), junior Cameron Padgett (UNC) and sophomore Chance Mako (NC State) — already have committed to Division I programs. Basinger, who is 5-foot-10, 140 pounds, doesn’t have the projected ceiling of those three because his body isn’t as big and his fastball isn’t as brisk, but he sends discouraged hitters back to the dugout just as frequently.

“My size always seemed to be an issue with D-I programs,” Basinger said. “But I’m really excited about Catawba. If I’d gone to a D-I program, I probably wouldn’t get a chance to pitch until I was a junior. I’m going to have the opportunity to earn innings as a freshman at Catawba. That mattered a lot. I want to be able to pitch four years.”

Basinger’s father, John, a former hurler who threw wicked breaking stuff back in the late 1980s, passed a lot of the tricks of the trade on to his son. He graduated from Salisbury High and Catawba.

“I was recruited by some other schools, but Catawba is less than 30 minutes away, my dad went there, and they have one of the best D-II programs anywhere,” Basinger said. “I made a baseball visit as well as an academic visit there, and I’ve been accepted.  There just weren’t any reasons to say no to Catawba.”

Basinger hasn’t gotten to pitch in high school as often as a player with his ability and results normally would have.

He spent his freshman season mostly on the jayvees, but he did make a few varsity appearances and went 1-0.

His junior season likely would’ve been a breakout for him. He was off to a 2-0 start when East’s season was stopped by COVID-19 after six games.

Now his senior season is projected to be a brief, 14-game affair, starting in April. He’ll be sharing innings with three flame-throwing studs, and with several more promising hurlers waiting for their chance if someone falters.

“With the staff we have, if you want to pitch, you’re going to have to pitch really well,” Basinger said.

East Rowan coach Brett Hatley has no doubt that Basinger will be a handful for hitters.

“He’s got some of the best breaking pitches that I’ve seen since I’ve been here,” Hatley said. “It’s late-breaking stuff that’s dropping sharply those last 15 feet or so. Most hitters swing and miss over the top.”

Hatley says “breaking pitches” — plural — because Basinger throws three different ones. There’s a curveball, a slider and a cutter that dives toward a lefty hitter’s hands. That’s an unusually advanced arsenal for a 17-year-old.

“I’ll tell you a Basinger story,” Hatley said. “There was a game where he had a guy 0-and-2 and shook off about five signs in a row. I went out there and asked him if our catcher needed to take off his mitt and start giving signs with both hands. It was like, ‘Come on JD, how many pitches do you have?'”

While Basinger doesn’t possess the 90ish fastball of his teammates, he was clocked as high as 87 mph this summer. He’s more of a lower-80s guy most of the time, but with the variety of pitches he throws, that’s plenty. He can spot fastballs on the outside corner, but he’s also not afraid to attack hitters inside.

“He works off his breaking pitches and they are so good they make his fastball look a lot quicker,” Hatley said. “He’s tough to hit.”

Basinger  is a bulldog. He has the mentality of a guy who can throw 99. He gained a tremendous amount of confidence with a strong summer with the South Charlotte Panthers showcase team. He pitched strings of scoreless innings for the Panthers and logged impressive strikeout totals. He struck out as many as nine batters in four innings against elite competition.

“We faced some of the best guys in the country in the Class of 2021,” Basinger said. “That makes you get tougher mentally. It didn’t matter who we were facing, I went out to the mound with the idea that I could throw the ball past anyone.”

Basinger backed up his outstanding work with the Panthers by helping East rule the local fall league. The two teams that reached the championship game were East 1 and East 2.

Catawba coaches saw him pitch in the fall league and knew he was a guy they wanted.

Catawba won’t need him to hit or field.  The Indians will let him focus on the mound. Catawba head coach Jim Gantt has never been one to worry about how tall guys are or how much they weigh or what the radar gun says. If you can get hitters out, you can get them out. Basinger should find a role.

“College baseball recruiting is very tough right now and it’s very different,” Hatley said. “Lots of college seniors are using that extra year of (COVID-19) eligibility at schools like Catawba. There’s not a lot of roster spots available and there’s not a lot of scholarship money to give out. I’m glad JD was able to make a commitment.”

With Catawba’s weightlifting program, Basinger won’t stay at 140 pounds very long. And as one of the coaches who tried to recruit Basinger told him, 20 more pounds could mean another 5 mph in velocity.

The present for Basinger, a solid student who will probably major in computer science, looks good.

The future could be something special.