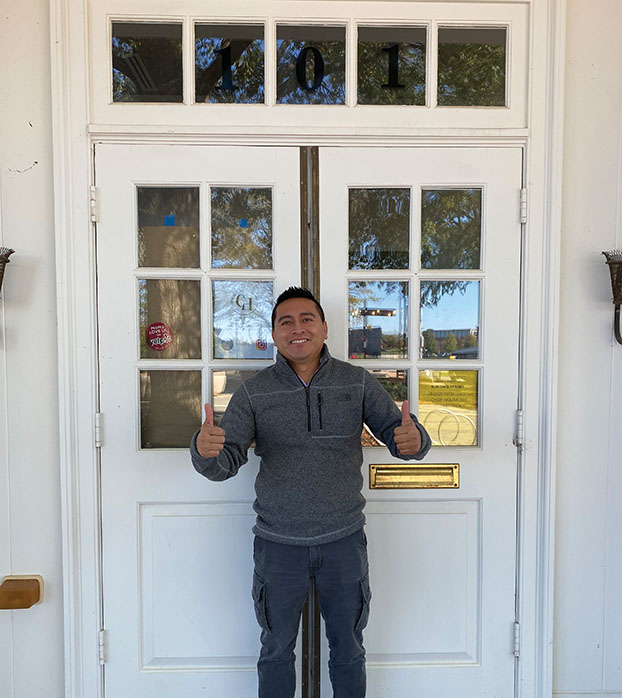 Carlos Hernandez stands outside the building that is in the finishing stages of becoming Chophouse 101, Kannapolis' new downtown steakhouse. Ben Stansell/Salisbury Post

KANNAPOLIS — When Carlos Hernandez was 10 years old, his mother gave him some advice: learn how to cook.

Since Hernandez’s mother worked long hours during the day and couldn’t cook for him, he didn’t have a choice besides accepting her suggestion. Hernandez, born and raised in Mexico, began to master his mother’s recipes and cook meals for himself and his younger sister.

At first, cooking was only a daily necessity for Hernandez, but when he went to culinary school as a teenager, preparing food became a career option. After graduating from cooking school, Hernandez moved to the Charlotte area in search of opportunity. He found it in the kitchen of Mama Fu’s Asian House, a restaurant owned by Stomp, Chomp and Roll, which owns several eateries in the Queen City.

Hernandez started as a “salad guy” but quickly worked his way up the ladder and earned a management position with the restaurant company. Eventually, Hernandez desired some creative control and set out to conquer the food truck scene of Charlotte.

Having accomplished that as well, Hernandez is ready to tackle his next challenge — bringing the building at 101 W. Avenue in downtown Kannapolis back to life as Chophouse 101.

Owning a restaurant of his own has been Hernandez’s dream for as long as he can remember. But when he came to Charlotte at 18 years old in the early 2000s, he had to start somewhere.

“I just started as a line cook, a salad guy,” Gonzales. “Then I learned how to cook using a wok and kept working my way up with that company.”

After five years of working in the kitchen at Mama Fu’s, Hernandez got the itch to try his hand at a different cuisine and made the move to the Pizza Peel & Tap Room, an Italian restaurant also owned by Stomp, Chomp and Roll. From there, Hernandez moved on to master barbecue while working at the Improper Pig, where he was featured on an episode of Food Network’s “Diners, Drive-ins and Dives.” 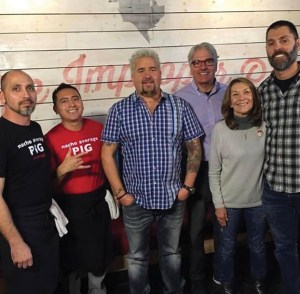 During his time as head chef and kitchen manager at The Improper Pig, Carlos Hernandez was featured on Food Network’s “Diners, Drive-ins and Dives” hosted by food personality Guy Fieri. Photo submitted.

Eventually Hernandez decided it was time to take what he’d learned over the last decade and take some creative license.

“After working for about 14 years with this company I was like, ‘All right, this company is growing, they’re opening more stores. I think it’s time for me to pull my own menus, my own company,’ ” Hernandez said.

Even though Hernandez couldn’t afford his own restaurant at the time, he could afford his own mobile kitchen — the Hot Tamale food truck was born. The red and yellow truck, embellished with flames and pictures of fresh produce, became a fixture at breweries in the Charlotte area, including Old Armor in downtown Kannapolis.

From truck to chophouse

“It was great from day one,” Lingafelt said. “We really built off of that because he came out with a super clean truck, super impressive how fast he was and how delicious everything was and everybody loved him.”

After serving tacos, tamales, nachos and other dishes out of his truck at Old Armor for several months, Hernandez approached Lingafelt with a question. The serendipitous conversation that ensued changed Hernandez’s life.

“(Hernandez) said he was looking for a building and I told him there were a few,” said Lingafelt, whose father Ken works Kannapolis Retail Ventures, the company developing parts of downtown. “The location where he is at now just became available. I took him up there as he’s sitting here with his food truck and said, ‘Come on, let’s go check it out real quick.’ We took him up there, walked him through it. I think it was like two weeks later he signed a lease.”

If that conversation had never happened, Lingafelt said, he doesn’t know if Chophouse 101 would be preparing to open in downtown Kannapolis soon. The new steak restaurant will occupy the space formerly filled by Restaurant 46.

The realization of Hernandez’s dream to own a restaurant came with big responsibility, like managing a 20-plus person staff and overseeing a restaurant that can seat about 140 people at full capacity.

“This was my dream the whole time, but when it comes to reality, it was like ‘Oh man, it’s big,’” Hernandez said. “It’s what I always wanted, but when you see all of the stuff that goes into it, it’s a long process. From when you start building to getting the flooring, you have to get the equipment, talk to the city and get the permits, it’s a lot of stuff.”

The lengthy, sometimes tedious process of preparing the restaurant for opening day will soon be over. Hernandez said that Chophouse 101 will probably open its doors in the third week of November. Diners at Chophouse 101 can expect a steak-forward menu that also features salads and sides with entrees starting around $13 and topping out at $30.

The connection that Hernandez formed with Old Armor will stay alive in some of the beef that he serves. Hernandez plans on sourcing some of his meat from a local farm in Cabarrus County that feeds its cows using spent grain that was drained of sugar in the brewing process by Old Armor.

“Every grain that comes out goes to that farm and he’s getting the livestock and things like that from there so it’s coming full circle, which is really cool,” Lingafelt said.

Chophouse 101 will  offer Old Armor beer, allowing customers to sip from beer that was made from the same grains that may have fed the beef they’re eating. Hernandez said that he’s hoping to partner with other local shops and breweries to include their products as well.

Above all else, Hernandez said that he hopes that Chophouse 101 will become a place where locals dine often.

“We want people to see that it’s affordable to eat with us,” Hernandez said. “We want them to think that they can come to this restaurant every weekend.”

Hot Tamale fans shouldn’t worry, Hernandez said that the food truck is only taking a break for the winter while Chophouse 101 gets up and running and will be back in the spring.