Duke vs. UNC: Victory Bell up for grabs Saturday 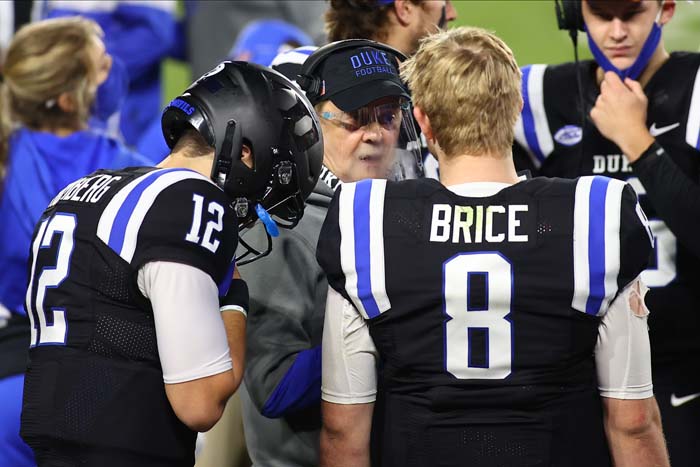 North Carolina has spent the past month climbing all the way to fifth in the Top 25 then sliding out completely after two road losses against unranked opponents.

The Tar Heels are still looking for consistency as they head into November with Saturday’s trip to rival Duke.

The Tar Heels (4-2, 4-2 Atlantic Coast Conference) have looked strong and at times dominant in three home wins this year, including against ranked Virginia Tech and North Carolina State teams by double-digit margins. But they fell behind 31-7 by halftime before losing 31-28 at Florida State on Oct. 17, then gave up 28 straight points to fall behind 41-20 last week at Virginia in a 44-41 loss.

The Blue Devils (2-5, 1-5) are coming off a nonconference win against Charlotte, which allowed them to group from a rough opening six games that included surrendering more turnovers than any other team in the Bowl Subdivision ranks.

“This team is maturing,” Duke coach David Cutcliffe said. “There is a lot of youth. … We’re learning how to practice better. We’re learning that it does pay off, you’re reaping the benefits of this.

“It’s November. It is time. They do remember in college football what you do in November. This is where you should be playing your best football.”

The winner of the longtime rivalry between neighboring schools gets the Victory Bell, a cart carrying a former railroad engine bell used in the rivalry in the late 1940s. The winner typically paints the cart its shade of light or dark blue.

The trophy led to a bit of tension last year in a drama-filled finish. After Chazz Surratt’s goal-line interception ended Duke’s three-year hold on the bell, the Tar Heels ran across the field to reclaim it near the Duke sideline, leading to Cutcliffe and UNC offensive lineman Jordan Tucker exchanging words as the Blue Devils headed to the locker room.

“I think last year really hurt us a lot, with the way it ended,” Duke safety Michael Carter II said.

UNC’s defense has to improve against the run game. The Tar Heels surrendered 241 yards rushing against the Seminoles and 210 more against Virginia, with particular trouble against mobile quarterbacks.

“We have a good plan,” linebacker Tomon Fox said. “We have good enough players. … In order to be a great defense, we have to get better each week. We can’t have these up and downs like a roller-coaster.”

Duke has lost 23 turnovers this season, at least four more than any other FBS team. That includes 13 interceptions (11 from Clemson graduate transfer quarterback Chase Brice) and 10 fumbles, with the Blue Devils losing at least one turnover in every game and as many as seven in a loss to Virginia.

Expect to see a heavy dose of the run for both teams.

UNC running back Michael Carter is third in the ACC in rushing (108.0 yards per game) while teammate Javonte Williams is fourth (102.7). For Duke, Deon Jackson (78.1) is ninth in the league in rushing while teammate Mataeo Durant has a pair of 100-yard rushing games this season, too.

The Tar Heels have lost eight games dating to last season. All have been decided by seven points or fewer.