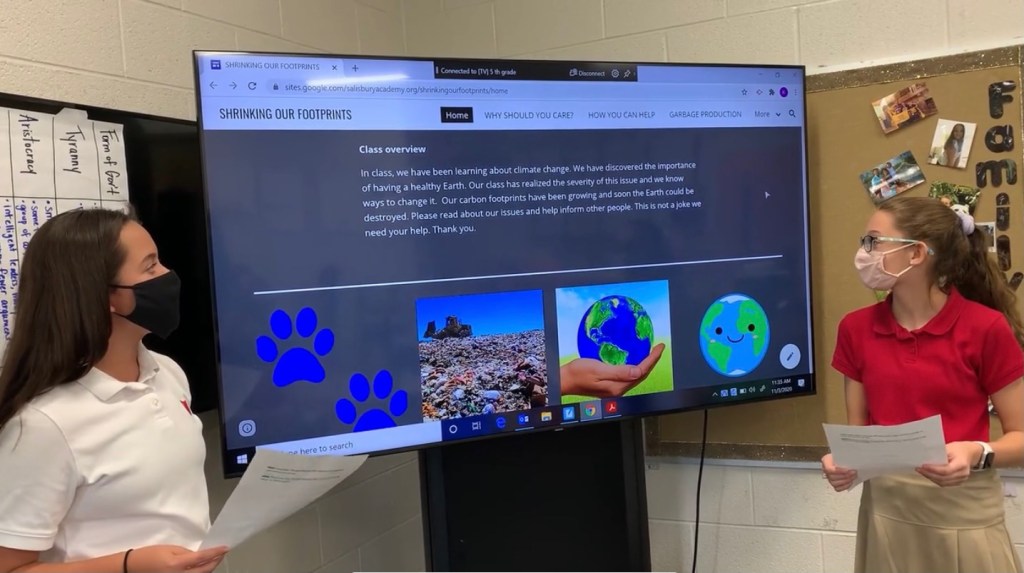 SALISBURY — Sixth graders at Salisbury Academy took a look at what’s sent into the atmosphere and decided to take action as a result.

Sixth grade teacher Kelli Starrett said this was part of a problem-based learning project her students took on in the previous past couple of weeks.

Students watched a documentary about climate change. Then ,Starrett gave them the chance to decide what kind of project they wanted to take on. The students calculated their own carbon footprints, created a webpage with information about climate change and made a video about the issue.

Some students were surprised by how large their carbon footprints were, and others expected them to exceed expectations.

Some of the students were surprised by what affected the footprints as well. They expected driving to have an impact, but other factors like electricity and food were less straightforward.

Ott said she had not thought much about her carbon footprint before, but her family could use fewer lights and less water.

She said her favorite part was being able to learn more about the issue and she said she knows more now than she did going in.

In a video for the project, students discuss what climate change is and list some ways people can cut back on their own contributions, including eating local food, driving less and cutting back on electricity usage.

They found people can trim electricity use by turning off lights when leaving a room, wearing warmer clothes rather than turning up the heat and taking shorter showers.

Your carbon footprint is not just about carbon dioxide. Methane, a natural gas produced by animals and rotting material, has a significant greenhouse effect when trapped in the atmosphere.

Students pointed to food waste as another way to cut back on your carbon emissions and keep food out of landfills.

When people eat food that travels a long distance, there is a carbon cost associated with that as well.

Benji Anderson said if people buy apples grown far away, they have to travel to you, but buying local food or growing your own produce can help.

Anderson said when he first heard about climate change, it did not worry him, but he learned more about it and now it bothers him.

“We need to stop it now,” Anderson said.

The students are also creating a bike rack outside of the school and plan to use donated pallets to make it.

Starrett said students retain information better when they take on this kind of project because they can more easily connect with the concepts involved. The class members agreed they like this kind of assignment more than just learning information from reading and lectures.

“If you’re not working through it yourself and finding solutions yourself, you’re not going to remember it long term,” Starrett said. “When it’s making an impact on your emotions and on your being, they’ll never forget that.”

Academy Directory of Marketing and Communications Lizzy Roy said the school has environmental education integrated throughout the curriculum at the school as well.