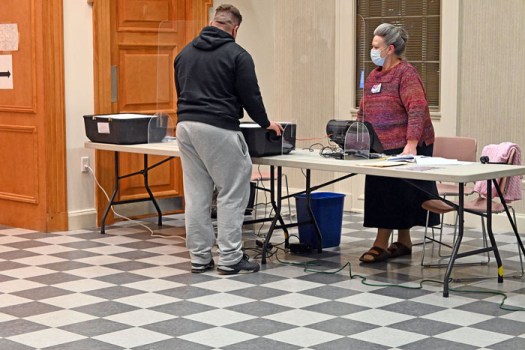 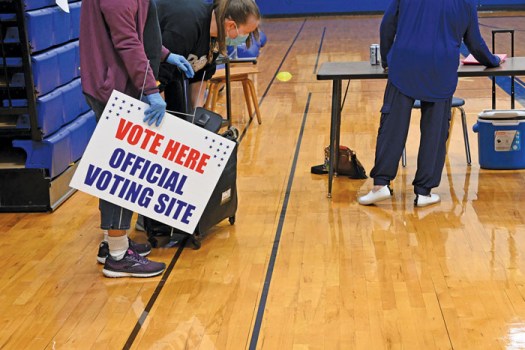 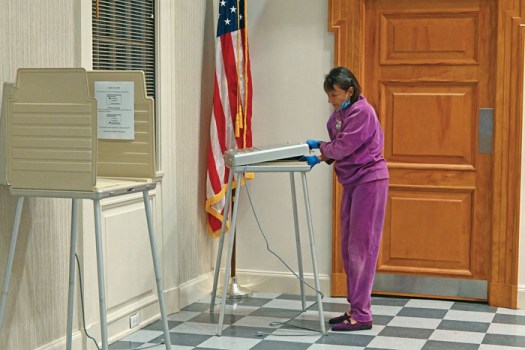 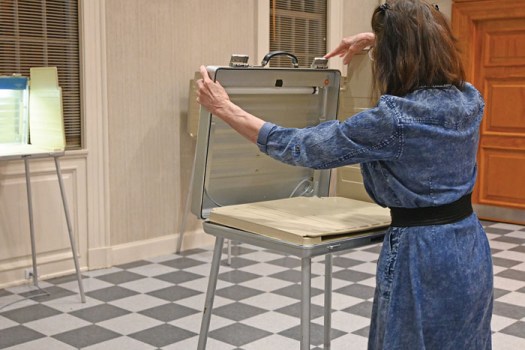 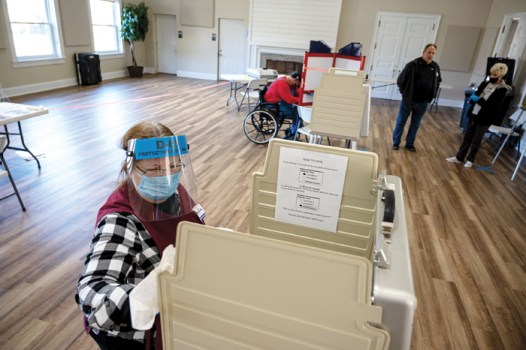 Josh Bergeron / Salisbury Post - Wanda Taylor, who has worked at the China Grove Community Center polling location three times, wipes down a voting booth after use on Tuesday.

SALISBURY — While in-person turnout on Election Day was lower than in past years, 75.10% of local registered voters cast a vote in the 2020 election by Tuesday night, marking the largest turnout in the county for a general election since 1984 when former president Ronald Reagan was elected.

Of the 97,443 registered voters in the county, 73,175 votes had been cast by Wednesday night, which includes absentee by mail ballots and early voting totals. A majority of voters cast their ballots before Election Day in Rowan County.

The final turnout number could slightly increase because about 1,750 absentee by mail ballots have been requested by voters and not yet accepted by the Rowan County Board of Elections. There are also 426 provisional ballots, which are used to record a vote when there are questions regarding a given voter’s eligibility. Those ballots must be resolved before votes can be counted.

McCubbins said the remaining absentee by mail ballots will be accepted during a virtual board of elections meeting on Nov. 12 at 5:30 p.m.

And while McCubbins was unable to project by how much those remaining ballots could affect the results, she suspected it could only really impact the three local school board races, which all saw no more than a difference of three percentage points in each race.

Henry Diggs, chief judge at the Rowan Public Library headquarters in precinct 35, said things went smoothly with no incidents or conflicts and positive feedback among poll observers. Only about 160 voters showed up to the precinct Tuesday to cast a vote, which is hundreds fewer than the usual election day turnout, he said. That’s because so many voted early or cast an absentee ballot, Diggs said.

“The voters have really spoken overall,” he said.

Diggs also served as chief judge at Spencer’s early voting location in the Spencer Municipal Building. There, he said, seeing the record turnout was “eye-opening” and “rewarding.”

Mary James, who also volunteered at the Rowan Public Library site, said she was shocked at such low turnout on election day, as well as the lack of campaigning from candidates.

Overall, election officials said they were confident with the COVID-19 precautions in place and the process followed.

“We feel confident we met the needs of voters,” Diggs added.

Sharon Dyar-Hopkins, chief judge at the Knox Middle School voting site in precinct 39, saw a similarly low Election Day turnout to the Rowan Public Library headquarters site, as a little more than 200 voters cast a vote on Tuesday. In the primary election in March, that location saw about 800 voters, she added.

Dyar-Hopkins said this is her second year serving as chief judge.

She added that social distancing wasn’t an issue there due to the use of a school gym and much lower turnout compared to previous elections.

“It was much quieter, less hectic,” she said.

Dyar-Hopkins said it was good that the county allowed two weeks for early voting and included weekend voting and that so many absentee ballots were cast this year.

“It took a lot of the pressure off,” she said.

Election officials at both sites said most voters arrived in masks, but they were available for voters if they requested one.

By Wednesday afternoon, North Carolina reported a nearly 75% turnout rate among the nearly 7.36 million registered voters, with 5.49 million ballots cast to date. That includes the 977,186 absentee ballots cast to date, as well as the 3.62 million one-stop early voting ballots.

And that number could grow as more than 100,000 absentee ballots remain to be counted in North Carolina.