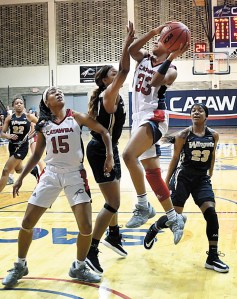 The 2020-21 South Atlantic Conference women’s basketball season gets under way on Nov. 21.

Each team will have regular COVID-19 testing weekly to ensure the health and safety of the student-athletes, coaches and administrators.

Each institution will have limited spectator seating in order to comply with state and local health guidelines. Fans should check with the host institution before making plans to attend any SAC basketball games in person.

Catawba senior Taisha DeShazo is on the preseason All-SAC first team, while sophomore Lyrik Thorne is on the second team.

Wingate, 17-13 last year, was picked fourth. Salisbury grad Bryanna Troutman averaged 9.1 points and 7.2 rebounds for the Bulldogs as a freshman.

See the Scoreboard for the complete poll and the preseason all-conference teams.

The favorite is Lincoln Memorial. The Railsplitters were 32-1 last season and are ranked third nationally entering this season. Lincoln Memorial received 11 of 13 first-place votes.

Lenoir-Rhyne and Tusculum also are picked ahead of Catawba. The Indians were 20-10 a year ago and were headed to the Southeast Regional when the season was halted.

See the Scoreboard for the complete poll and the preseason all-conference teams.

Entry is by donation and benefits Hospice and the Ed Dupree Scholarship Fund.

Runners and walkers are invited.

The Charlotte 49ers have announced that they have added a non-conference home football game to the 2020 schedule against Gardner-Webb on Saturday, Nov. 14. The game will be played at the 49ers’ Jerry Richardson Stadium. Game time is set for 12 noon and it will be broadcast on ESPN3.

East won 11-1 against Carson and 6-2 against Mount Pleasant in semifinals.

Michael Specht, Mason Murdock and Michael Gracer combined on a no-hitter in a 7-0 win against Central Davidson.

In a 6-3 win against East Davidson, Tanner Kaler and Chase Ervin did the pitching.