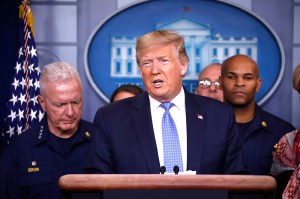 The Associated Press has not declared a winner in North Carolina’s presidential contest because the race between President Donald Trump and Democratic nominee Joe Biden is too early to call.

Trump, who is locked in a tight battle with Biden to secure the 270 electoral votes needed to win the presidency, prematurely claimed early Wednesday that he won the state.

“We’ve clearly won North Carolina, where we’re up 1.7%, 77,000 votes with only approximately 5% left. They can’t catch us,” he said during an appearance at the White House. Trump also said he planned to contest the U.S. presidential election before the Supreme Court. It was unclear, exactly, what legal action he might pursue.

Though Trump is correct that he held a 76,000-vote lead in the state early Wednesday, the race is too early to call and there are still about 200,000 mail-in ballots left to count.

As long as those ballots are postmarked by Nov. 3, state election officials have until Nov. 12 to count them. And when it comes to mail ballots, Biden was outperforming Trump by far.

That means there’s a considerable number of ballots yet to be counted that could give Biden a lead.