Livingstone College students walk together to vote on Election Day 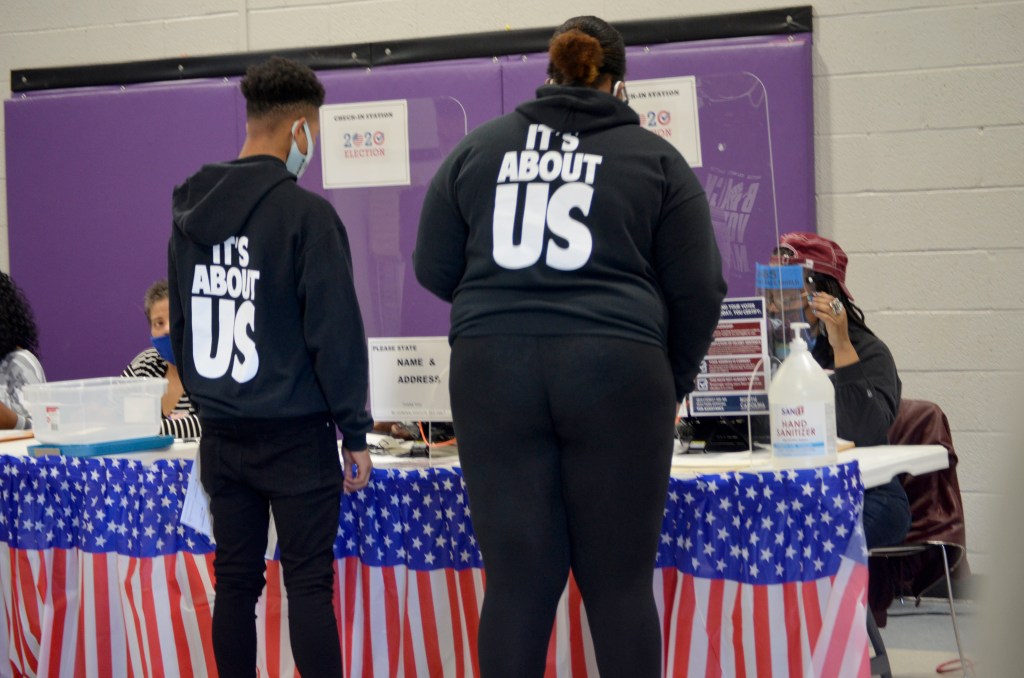 Livingstone College students provide information to get their election day ballots where students showed up at the West Ward III precinct in droves to vote. Shavonne Potts/Salisbury Post

West Ward III is the home of Livingstone College and contains much of the area of Salisbury colloquially referred to as the West End. Livingstone makes a point to encourage its students to vote and incorporate voting into the college experience. This year was no different.

Patterson, who is in the midst of her last year at Livingstone, said she has plans to further her education by attending law school and her future was one motivator to get her to the polls. She was particularly worried about the possibility of cuts to federal student aid programs.

“It’s important for me because I am a college student and I do know that one of the candidates wants to take away financial aid and this is my last year of undergrad but I have law school to go to so it is very important for me to go out and vote today,” Patterson said.

Patterson said she also doesn’t want others to make decisions at the polls that will have an impact on her future.

“Not only do we not have the best candidates but it is affecting us students. We definitely are the future and without our vote, we’re going to have the ‘seasoned’ people making decisions that affect our lives,” Patterson said.

Craitaija McFadden, a native of Charleston, S.C., said there’s a large amount of racism in public life and she’s grateful for the opportunity to use her voice at the polls. Often in the Black community, she said, some choose to not vote because they feel as if their vote doesn’t matter. McFadden said she hopes to encourage others by example and show them “it really does matter.”

“Your voice actually matters and don’t be afraid to let somebody put you down for what you really want to do because you can make a difference,” she said.

McFadden is a member of the college’s royal court, student government, NAACP and the service fraternity Alpha Phi Omega. 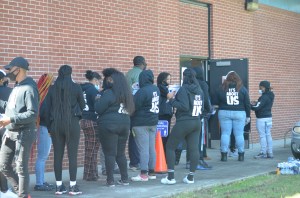 Eryka Praileau, a Livingstone student and this year’s Miss Livingstone, said people are not just voicing their preference for a president, they’re also “fighting for rights, heath care and things deeper than just a president.”

“It’s very important for everyone to get out and vote, not only emphasizing national elections but local elections as well because that’s where a lot of decisions are made that affects us directly,” Praileau said.

She said it’s also important for young people to vote because they should have a say in the candidate who advocates for them and their rights.

“Our rights are different than other generations so we need our needs met as well,” she said. “So it’s important for us as young people, as African-Americans to get out and vote.”

Michael Gilyard said he felt it was important to vote because “it seems we’re in a fight of humanity, not just presidents.”

“It’s become much larger than a regular ‘go and vote day.’ We’re in a fight for our lives,” he said.

Livingstone student Kendall Williamson, who was holding up a Black Lives Matter banner like others at the site, wore a Black Lives Matter hooded sweatshirt with the words “It’s About Us” on the back. He said it was important to him to get President Donald Trump out of office.

He said President Trump hasn’t spoken out about the Black Lives Matter movement or the deaths of Breonna Taylor, George Floyd and Ahmad Arbery.

Anthony Davis, senior vice president for Institutional Advancement/chief operating officer for Livingstone College, said he was elated to see so many students walk to their polling location.

“What touches my heart is that this is one of the modules of the holistic college — political activism, civic engagement,” Davis said. “So to see our students exercising their right to vote, they understand that Black lives matter but Black votes matter. We want to make sure that no one can silence our voice, steal the vote or suppress it, so we’re here today to exercise our vote. Our students have their eyes wide open and their ears open. They’re here to vote their conscience and more importantly, vote their values,” Davis said. 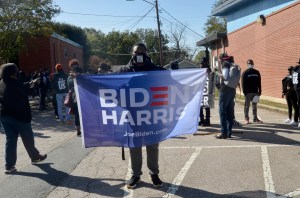 Kendall Williamson holds up a banner outside the West Ward III precinct as he waits to cast his vote. Behind him are hundreds of other Livingstone College students who waited to vote Tuesday. Shavonne Potts/Salisbury Post

Arlett Andaya said she has friends who are unable to vote and that this was an important election to make her voice heard for those who can’t, she said.

Joann Fuller, who was across Salisbury at Park Avenue Community Center, said she is hopeful that the “right people” will get into office.

“I think it was necessary for us to be here today. I feel like I can improve things by coming to vote,” said Joann Fuller.

Mary Thomas said she always votes and isn’t discouraged if her candidate doesn’t get elected because “my candidate may not have always won but I gave it my shot.”

She makes certain she votes, especially during a presidential election.

“I put my voice out there. It might not be accepted but my voice is there,” Thomas said.