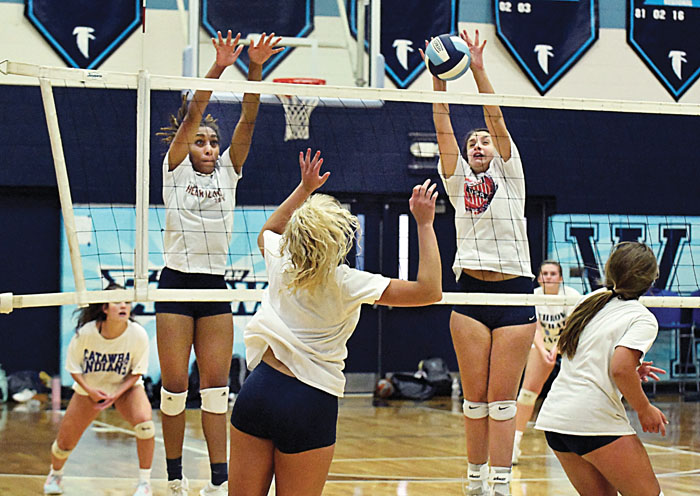 Salisbury Post file photo On Sept. 10, the West Roway volleyball team conducts a workout. At the net facing camera are DeDe Cuthberson, left, and Emma Gaeta. Back to camera is Kaylin Dowling.

SALISBURY — Volleyball and cross country are set to lead the return of NCHSAA sports on Wednesday.

Voluntary volleyball workouts and a few unofficial, non-uniformed cross country meets have been going on for months, but Wednesday brings the official start of full-team tryouts and practices that are sanctioned by the NCHSAA.

Competition is scheduled to begin in two weeks.

New reported cases of COVID-19 in North Carolina are at a higher rate now than they were during the summer surge, so every player, coach, parent and fan is anxious about what happens next.

North Carolina is still in a “pause” in Phase 3 of a COVID-19 reopening plan outlined by Governor Roy Cooper. There haven’t been any NCHSAA sporting events since things were shut down in March. Lost forever were 2020 basketball state championship games and 2020 spring seasons.

The NCHSAA’s game plan is for every athlete to enjoy a sports season in 2020-21, albeit a condensed one.

Cross country is a low-risk “green” sport in the NCHSAA’s color-coded green-yellow-red guidelines, meaning its deemed one of the safer sports and one of the least likely to spread virus cases. As an outdoor sport, cross country meets can expect to have generous spectator limits.

Cross country meets can start as early as Nov. 16.

Volleyball is a “yellow” sport, which means officials and coaches are expected to exercise extra caution. There are protocols in place for “yellow” sports designed to limit the risk of transmitting COVID-19.

Volleyball is played indoors, so there will be a limit of 25 people in the gym. That’s in addition to the players, coaches, workers and support staff.

Those 25 are likely to be parents of the home-team players. At this time, it’s unlikely fans will get a chance to see any road games.

Volleyball matches can be played as early as Nov. 16. Teams plan on playing 14-game seasons. That includes conference tournaments. Playoffs will take place in January.

The third sport scheduled to get under way is swimming, with the first official practice on Nov. 23. Swimming falls in the “green” sport category.

The next sport on the NCHSAA’s revised agenda is basketball. Basketball is a “red” sport, with the first practices set for Dec. 7 and the first contests on Jan. 4, 2021.

The N.C. Department of Health & Human Services does not recommend competition in a “red” sport while the state remains in Phase 3, so that’s something to keep an eye on.

Football, which is scheduled for February, is also an obvious member of the “red” sport category.

NCHSAA commissioner Que Tucker has stated she is “cautiously optimistic, excited and hopeful” that sports will take place as they are now scheduled.

Things have opened up some as far as the number of participants allowed at outdoor skill-development sessions and workouts for sports such as football. That’s a positive sign.

For indoor and outdoor pools, spectator capacity is limited to 50%, and athletes, coaches, workers, entertainers, and support staff do count toward the capacity limits at pools.