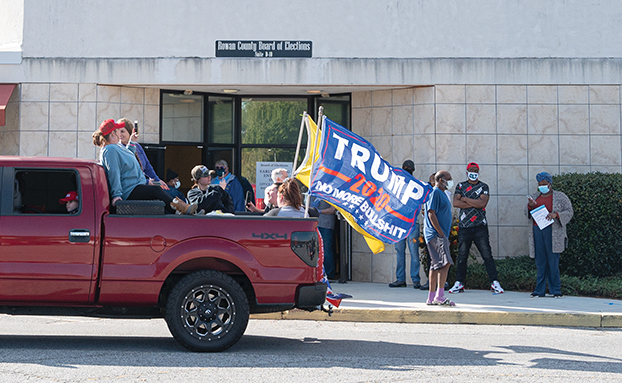 Salisbury Post file photo - A group of voters watch as a caravan of Trump supporters pass by the Rowan County Board of Elections.

Elections must be free and fair — to include being free from voter intimidation and disruptions at polling locations.

Voters should be able to wait outside a polling locations, enter and cast their ballot without being subjected to blatant intimidation such as physical violence as well as the threat of violence or insults. They also should not be subjected to cars with memorabilia supporting a candidate parading back and forth in a no-campaigning area.

If the latter example sounds familiar, it’s because remnants of a caravan of cars that participated in a pro-Trump event downtown did exactly that, bringing the deafening noise of car and truck horns as well as banners and flags supporting President Donald Trump to Salisbury’s polling location.

To be clear, the downtown rendition may have broken Salisbury’s antiquated cruise-in rules, but it did not cross any boundaries other than being disruptive for those who disagree with or despise the president and his supporters. The actions by a few dozen cars later crossed a line — a no-campaigning line that surrounds all polling sites to be specific. It does not appear that any voters were prevented from casting their ballot.

If groups of people want to put on events supporting a particular candidate of office, they should do it away from polling places, and there are plenty of good, recent examples of this — to include Saturday’s downtown parade of Trump supporters.

If groups organize caravans to the polls, there’s no need to be disruptive about it. Besides, there are acres of asphalt at West End Plaza. Pulling up to the entrance for an early voting site and blaring car horns, is probably the least effective method to convince a voter to support your candidate. The country is already on edge from a difficult year for all and political polarization that has reached an all-time high. Let’s avoid doing something to push it off a cliff.

For voters and teenagers who want to show their support for a political candidate, look to the local Republican or Democratic parties. Both welcome volunteers and will quickly put people to work — whether it’s making phone calls, signs, knocking on doors, handing out flyers or working to flag down voters to try to make a last-ditch appeal. Those who aren’t already volunteering and participated in Saturday’s polling location drive-by should ask the Rowan County Republican Party how they can help.