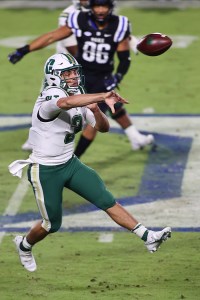 DURHAM— Charlotte 49ers quarterback Chris Reynolds (Davie) didn’t have a great passing game in Saturday’s 53-19 loss at Duke (18-for-34, 171 yards, 1 TD), but he now has six touchdown passes with no interceptions in his last four games.

Reynolds has 1,100 passing yards for the season and is the first player in program history to top 1,000 in three straight seasons.

Reynolds has 4,837 passing yards in his career. He should be the second in program history to surpass 5,000.

Zion DeBose (North Rowan) had a tackle for Virginia Tech in Saturday’s 42-35 ACC win against Louisville.

Salisbury native Mitch Jeter, who graduated from Cannon School, is handling kickoffs for South Carolina as a true freshman.

Jeter has touchbacks on 16 of his 30 kickoffs.

Lyerly tied for second in the Lonnie Poole Amateur in Raleigh.

The previous week, Lyerly was second in the Griffin Men’s Amateur in Greensboro.

Philadelphia’s Javon Hargrave (North Rowan) had a two tackles, one for loss, and wrecked a pass play in Sunday’s 23-9 win against the Dallas Cowboys.

Chris Smith (West Rowan) had a tackle and a hit on the quarterback in Las Vegas’ 16-6 win against Cleveland on Sunday.