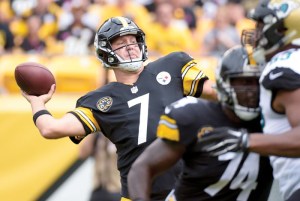 BALTIMORE (AP) — The Pittsburgh Steelers rallied behind Ben Roethlisberger to remain the lone unbeaten team in the NFL, beating error-prone Lamar Jackson and the Baltimore Ravens 28-24 on Sunday in a duel for first place in the AFC North.

Roethlisberger threw a pair of second-half touchdown passes to bring Pittsburgh (7-0) back from a 10-point halftime deficit. After completing only four passes for 24 yards in the first half, the 38-year-old finished 21 for 32 for 182 yards.

Jackson threw two interceptions and lost two fumbles, turnovers that helped Pittsburgh stay within striking distance until its offense finally got on track.

The Steelers led 28-24 when the Ravens (5-2) faced a fourth-and-3 at the Pittsburgh 8 with 2 minutes left. Jackson ran a quarterback draw and lost the ball while being stopped short.

Baltimore got the ball back and moved to the Pittsburgh 23 before Jackson’s pass in the end zone was broken up on the final play.

Earlier, Robert Spillane took an interception back for a score to end Baltimore’s first possession; Jackson lost a fumble inside the Pittsburgh 5; and Alex Hightower set up a Steelers touchdown by picking off a pass on Baltimore’s initial offensive play of the second half.

The Steelers stretched their streak of games with at least one sack to 64, and Baltimore’s run of games with a takeaway reached 20 when Peters forced a fumble by Claypool in the first quarter.

ORCHARD PARK, N.Y. (AP ) — Backup defensive lineman Justin Zimmer punched the ball out of Cam Newton’s arms and the fumble was recovered by safety Dean Marlowe at the Buffalo 13 with 31 seconds remaining to secure the win.

Zack Moss scored two touchdowns rushing and the AFC East-leading Bills are off to consecutive 6-2 starts for the first time since a six-year run from 1988 to 1993. Buffalo snapped a seven-game skid against the division-rival Patriots, and beat a Bill Belichick-coaches New England team for just the sixth time in 41 meetings, going back to 2000.

New England dropped to 2-5 and has lost four in a row, matching its worst skid since 2002.

The game was decided just as the Patriots were threatening to at least force overtime. Facing second-and-10 at the Buffalo 19, Newton took the snap and followed a line of blockers to his left. Zimmer came diving in from behind and punched out the ball, which rolled directly into Marlowe’s arms.

MIAMI GARDENS, Fla. (AP ) — Tua Tagovailoa threw his first career touchdown pass and then let his teammates take over with a succession of big plays.

The Dolphins stamped themselves as playoff contenders by earning their third consecutive win. They struck for scores 75 seconds apart on Andrew Van Ginkel’s 78-yard fumble return and Jakeem Grant’s team-record 88-yard punt return. They came up with four takeaways in the first half and at halftime led 28-10 despite being outgained 224-54.

The big plays helped Tagovailoa overcome a costly early turnover in his first NFL start. The No. 5 overall pick in this year’s draft finished 12 of 22 for 93 yards.

The Rams (5-3) ran 92 plays to the Dolphins’ 48, and Miami won while totaling eight first downs and 145 yards. The Dolphins (4-3) have outscored opponents by a combined 95-34 in the past three games, and they’re above .500 for the first time in their 23 games under second-year coach Brian Flores.

The Bears’ Cairo Santos booted a 51-yard field goal at the end of regulation to force the extra period.

The Saints (5-2) led 23-13 early in the fourth quarter after scoring 20 consecutive points, only to have Chicago rally in the closing minutes of regulation. But the three-time defending NFC South champions pulled out their fourth straight win when Lutz connected on their second possession of OT.

The Saints had a first down at the 16 when coach Sean Payton called on him. And Lutz delivered, sending the Bears (5-3) to their second straight loss. New Orleans tied Tampa Bay for the division lead, with Brady and the Buccaneers meeting the struggling New York Giants on Monday night.

Brees added a 20-yard touchdown to Taysom Hill to make it 23-13 early in the fourth period. The Bears (5-3) pulled within three with 3:32 remaining on Foles’ 3-yard pass to Darnell Mooney.

After the Saints went three-and-out, Chicago tied it with 13 seconds left on Santos’ field goal into the wind.

SEATTLE (AP) — Russell Wilson threw four more touchdown passes, two to DK Metcalf. Wilson and Metcalf tormented San Francisco and its banged-up secondary as the top-scoring offense in the league continued to pile up points. The Seahawks (6-1) have scored at least 30 points in six of seven games.

Wilson hit Metcalf on a pair of first-half touchdown passes, but it was a 2½-minute sequence midway through the third quarter when Seattle blew the game open.

Wilson found rookie DeeJay Dallas on a 2-yard TD pass after San Francisco went three-and-out to open the second half for a 20-7 lead. Dante Pettis fumbled the ensuing kickoff on a big hit from Cody Barton. Six plays later, Wilson evaded pressure in the pocket and zipped a 6-yard TD pass to David Moore for a 27-7 lead.

Wilson finished 27 of 37 for 261 yards and has 26 TD passes on the season, one behind Tom Brady for the most in the first seven games of a season.

A pair of two-win teams fighting for first place in the weak NFC East in Week 8 put on a sloppy performance fit for the preseason instead of prime time.

The Eagles (3-4-1) took control of the division with their second straight victory. Dallas (2-6) has lost three in a row.

Wentz threw two interceptions and lost two fumbles but his 9-yard TD pass to Travis Fulgham in the third quarter gave Philadelphia the lead for good. Wentz connected with Jalen Reagor on the 2-point conversion to make it 15-9.

DENVER (AP) — Drew Lock hit rookie KJ Hamler from 1 yard with no time on the clock and Brandon McManus nailed the extra point to win it. The Broncos (3-4) overcame a 24-3 deficit and rallied after being held to 60 first-half yards, including 2 on the ground.

The Chargers (2-5) appeared primed to end their seven-game AFC West losing streak behind another great performance by rookie Justin Herbert, who joined Deshaun Watson as the only QBs in NFL history with four straight games with three TD passes. But the Chargers became the first team to lose three games they led by 17 or more points in the same season since the Atlanta Falcons did it in 2003.

The Broncos got the ball at their 19 with 2:24 remaining and Lock drove them 81 yards in 14 plays, helped by two defensive flags.

On fourth-and-4 from the 18 with 7 seconds left, Lock’s pass to rookie tight end Albert Okwuegbunam was incomplete, but defensive back Brandon Facyson was whistled for pass interference, giving the Broncos the ball at the 1 with 1 second remaining.

Lock took the snap, rolled right and found Hamler in the back of the end zone. He got down before going out of bounds with no time left.

The Vikings withstood a three-touchdown performance from receiver Davante Adams, who had seven catches for 53 yards.

Green Bay had the ball at Minnesota’s 41-yard line with 12 seconds and no timeouts left, but D.J. Wonnum sacked Aaron Rodgers and knocked the ball loose. Eric Wilson recovered at the 24 as time expired.

Cook missed Minnesota’s last game with a groin injury that had him listed as questionable, but he looked just fine while dicing up Green Bay’s defense all day. Each of the Vikings’ first four possessions ended with Cook touchdowns. He ran for 163 yards and three touchdowns on 30 carries. Cook also had two catches for 63 yards, including a 50-yard score.

The only other Vikings to score four touchdowns in a game are Ahmad Rashad in 1979 and Chuck Foreman in 1975.

Carr’s strike to Renfrow with 14:53 to go was the game’s only TD and helped the Raiders (4-3) bounce back after they fell apart late in last week’s 45-20 loss to Tampa Bay.

Using running back Josh Jacobs and a short passing game, Carr controlled the clock in the second half and kept the ball away from the Browns (5-3).

The Raiders had allowed 10-plus points in an NFL-record 116 straight games.

The Bengals (2-5-1) blew leads each of the previous two weeks, but Burrow would not allow it to happen again. Instead, he threw for 249 yards and the crucial late scores to snap a three-game losing streak. Cincinnati has matched its victory total from last season. And it was the first time second-year head coach Zac Taylor has defeated a team with a winning record.

Tennessee (5-2) has lost two straight and had a five-game road winning streak end. The Titans are now tied with the Indianapolis Colts atop the AFC South.

Cincinnati’s reversal of fortune came on a day that began with five offensive starters on the inactive list and despite A.J. Green again struggling to become a major contributor. Somehow, though, Burrow found a winning combination.

Derrick Henry rushed for 188 yards but it was the first time Tennessee has lost when Henry topped the 100-yard mark.

Tyreek Hill had 98 yards receiving and two touchdowns, Travis Kelce finished with 109 yards and another score, and Mecole Hardman and Demarcus Robinson also reached the end zone. The Chiefs (7-1) gave Andy Reid his 229th win to move into a tie with Hall of Fame coach Curly Lambeau for fifth most in NFL history.

Le’Veon Bell, getting a crack at the Jets just a few weeks after they released him, was held to 7 yards rushing with three catches for another 31 yards — though it wasn’t as if Kansas City needed him.

Darnold, who was without top receivers Jamison Crowder and Breshad Perriman because of injuries, was 18 of 30 for 133 yards as the Jets fell to 0-8 for the first time since the 1996 team of Rich Kotite that went 1-15.

Rivers picked apart Detroit’s defense while completing 23 of 33 attempts, mostly short passes to the outside or over the middle. The 38-year-old quarterback also showed he still has some arm strength to go along with his savvy touch, perfectly throwing a 29-yard pass to Nyheim Hines late in the first half.

The Colts (5-2) were healthy and looked rested and ready to roll after being idle last week and improved to 3-0 after a bye under coach Frank Reich.

The Lions (3-4) lost a seventh straight home game, dating to last season, and missed an opportunity to win three in a row for the first time with coach Matt Patricia.

Matthew Stafford was 24 of 42 for 336 yards with three touchdowns, two to Marvin Jones, and two costly turnovers.