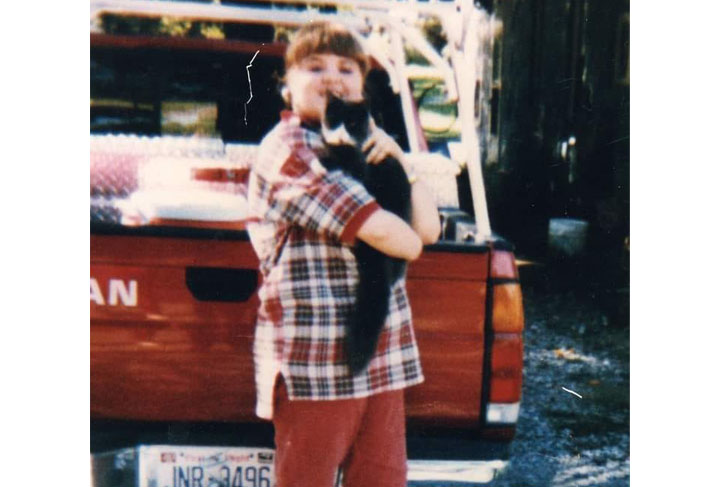 Sheila Wall, 17, is shown in this 1995 photo taken with her cat just a few months before she was murdered by her boyfriend. Submitted photo

As the calendar gets close to Nov. 3, she finds it hard not to think about her sister’s death, now 25 years ago.

That sister, Sheila Dianne Wall, was murdered at the age of 17 by her boyfriend. Sue Wall, now 52, was in her 20s when her sister’s body was found in the woods near Burdette Bridge in Spencer. She was left there by 42-year-old Anthony Jerome Hipps. She’d been stabbed 37 times, beaten with a large piece of wood, and covered with leaves and other debris.

Hipps would later lead law enforcement to the teen’s body and confess to killing her. He confided in his nephew that he’d killed his girlfriend after the two argued.

The nephew was later charged with aiding in the girl’s death after Hipps told officers his nephew helped him. Hipps later recanted and said he lied to officers because his nephew reported the killing.

The teen began dating Hipps in December 1994, and friends and family began to notice bruises and other injuries in the summer of 1995, Sue Wall recalled. Sheila confided in a few people, including godmother, Gwen Fisher, that she was afraid of Hipps.

Fisher later testified at the 1995 murder trial that Sheila was afraid Hipps might kill her.

“He was abusive toward her,” Sue Wall said.

Court testimony revealed Hipps drank in addition to using cocaine and marijuana and abusing the teen. The two argued the night before Sheila was killed. A witness saw Hipps and Sheila argue outside the Country Cupboard in Spencer. The last time the Wall family saw Sheila was when she and Hipps were walking down the street together.

A forensic psychologist testified that Hipps showed many signs of profound mental illness.

Hipps was sentenced to death and, later, life in prison when then Gov. Mike Easley signed a bill into law in 2001 that forbid the execution of defendants with “mental retardation.” Since Hipps was convicted of murder in 1978, he was determined to be a habitual felon and received two life sentences, Sue Wall recalled.

Sue said her sister’s murder shocked the community and hurt a lot of people in her family.

“My mother really grieved over her … and never really got over it,” Sue said.

Sue’s mother died of cancer in 2003 and Fisher died a few weeks ago. Sue said she believes Fisher never came to terms with Sheila’s death either.

“Gwen said she didn’t get a chance to live life, have children or experience her nieces and nephews,” Sue Wall said.

Today, Sue Wall tries to tell “Sheila’s story” to any friends or acquaintances who are in abusive relationships. She and her seven other siblings have made sure that the family still speaks of Sheila. They talk about her as often as they can. They visit her gravesite at a cemetery in Spencer and place flowers there.

One Sue Wall’s nieces, Shealiea, was named in honor of Sheila. Sue Wall said that niece Jennifer Dianne was also named after Sheila. Another niece has many facial features just like Sheila did when she was the same age, Sue Wall said.

Jeannie Imes, Sheila’s sister, said she believes Sheila would have been either a veterinarian or in the health care field like many of her other siblings. Imes said she imagines her sister may have become a nursing assistant.

The family grew up near Bethany Retirement Center and many went on to work there. Imes said her little sister loved animals of all kinds and also enjoyed drawing and painting.

“She had a heart of gold and she never looked down on people. She thought of all people as equal no matter what,” Imes said.

Even as a teen, Imes said, Sheila often thought of others before herself. She would often take food from home and feed others although she knew the family had very little.

“But she always would say, ‘God will always look out for the family,’ ” Imes said.

Sue Wall said the family never really had the opportunity to properly thank law enforcement for their investigative work that included the Spencer Police Department and the Rowan County Sheriff’s Office as well as former district attorney Bill Kenerly.

“I just want to thank them, those who helped with her case and those who sent prayers and condolences,” Sue said.