SALISBURY — A tower stretching nearly 100-feet tall near the Stanly County Airport could help solve a major problem for some Rowan County residents.

At the top of the tower is a fixed wireless hub that will soon transmit radio waves to antennas attached to people’s houses in rural, underserved parts of eastern Rowan County.

The hub on top of the tower is owned by Open Broadband, a Waxhaw-based company that provides internet to communities across the state. Using funds provided by the CARES Act and the county’s budget distributed by the Rowan County Board of Commissioners, Open Broadband is working to bring fixed-wireless internet access to communities in western and eastern portions of the county.

Although the tower is across the border in Stanly County, it’s transmission will benefit places in eastern Rowan such as residences in the Tuckertown Reservoir area, where W. Lee Simmons sees his neighbors struggle to deal with not having access to high-speed internet.

With many schools going at least partially online and some employers telling their employees to work from home, having reliable internet access has never been more important. Many people in Rowan County still do not have it.

Besides accessing the internet using cell service, Simmons said that his 30 or so neighbors are largely out of good options.

“They have to get their kids, put them in the car and drive them up to Food Lion and sit out there and hook up to Wi-Fi to do their homework,” Simmons said.

While HughesNet can provide satellite internet services, Simmons said residents are clamoring for something more reliable.

“The only thing they can do is go to Verizon or HughesNet or one of those guys to get any kind of service at all,” said Simmons, who is the president of the Stillwaters neighborhood Homeowners Association. “Yet, there are several little businesses out there that operate out of their homes that can’t because there’s no bandwidth to do it.”

Simmons lives in one of the two areas identified by the Rowan County Broadband Task Force that were in greatest need of improved internet connectivity. The task force, of which Simmons is a member, has been working to improve broadband access in the county since February 2018.

Led by Chief Information Officer and Assistant County Manager Randy Cress, the task force conducted surveys and utilized maps to determine where better internet access most needed and explored options to make it happen. The issue had to be tackled through a public-private partnership, since North Carolina law precludes the county from owning, operating or investing in broadband service to the public.

When the county received CARES Act money from the federal government, it elected to distribute up to $200,000 to incentivize Open Broadband to expand into the eastern and northwestern reaches of the county, including the Scotch Irish township.

The county will contribute an additional $50,000 as well. Open Broadband Chief Technical Officer Kent Winrich said that most of the funding will go toward purchasing equipment, which is the biggest expense in bringing broadband connectivity to rural places.

The type of service that Open Broadband will provide is called fixed wireless and will rely on transmitting radio signals via antennas. It utilizes radio and water towers and other high-up spaces to beam internet over a large area in a cost-effective way. Although fiber is well-known for being reliable and providing fast download speeds, it’s more common in urban areas since it is expensive to install.

“A lot of the fiber is going into the metropolitan areas, which makes a lot of sense,” said Winrich, who formerly served as broadband director for Fibrant. “But if you have to run fiber in a rural area at $60,000 a mile and you only get a few customers out of that, there’s no payback.”

Even in the unique case that fiber internet cables may already be installed in a rural area, the company that owns it might not be interested in using them. Simmons said that there are 20 “dark” fibers owned by AT&T that run to the equipment room near his home. At one time, Simmons used those fibers to run a data center for JanPak. Simmons said that AT&T hasn’t shown interest in “heating up” the fiber wires, despite his attempts to convince them to do so.

Instead of relying on fiber cables, Simmons’ neighbors will soon be able to use Open Broadband’s services. Open Broadband offers home wireless internet access starting around $40. 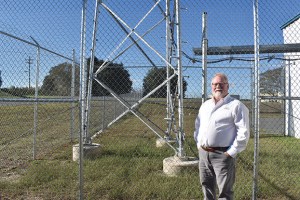 Commissioner Judy Klusman, who also served on the task force, said that she is “elated” to see broadband internet access expand to more parts of the county.

Winrich and his team will next turn their attention toward bringing better internet access to the western portion of Rowan County by utilizing the vantage point provided by Young’s Mountain. Since the CARES Act money must be used by Dec. 30, Winrich is working against the clock.

“The funding that we’re getting from the county allows us to expedite the process, Winrich said. “Normally it would take us a good couple of months to do this, but the county funding has allowed us to buy equipment faster.”

Winrich said that he plans on having all equipment installed and ready to go to serve the eastern part of Rowan County by the end of the year.

More information on Open Broadband and the service it will offer Rowan County residents can be found at openbb.net.