Walkers bring conversations about suicide, mental health ‘Into the Light’ 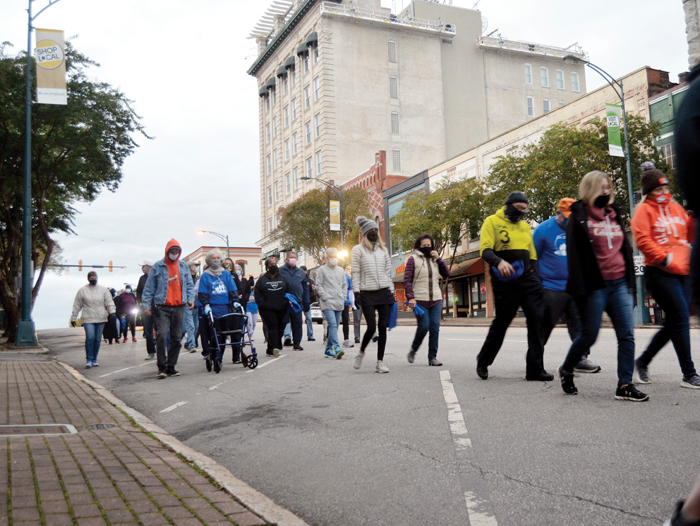 Dozens of people walked the streets of downtown Salisbury during the Into the Light suicide prevention and mental health awareness walk. Shavonne Potts/Salisbury Post

It never occurred to her that he was suffering until he ended his own life.

Linker and several family members and friends joined dozens of others Saturday for the Into the Light Suicide and Mental Health Awareness Walk. It was the second year for the walk, which was created after the Rowan County United Way’s community assessment revealed that addiction and mental health were among the top issues in Rowan County.

“Two weeks ago for us, our life changed,” Linker said.

Hayes, 25, left behind a 5-year-old son as well as siblings, his father and stepmother. He had gone back to work with Josh Williams Motorsports, Linker said, where his love of racing became a job. He had gotten into trouble and was working to turn things around, she said.

“When I saw a smile on his face, I thought things were great. He just had completely changed over the last three months. He was spending more time with people,” Linker said.

He was a completely different person, she said, but the reality was he was suffering in silence.

“It just seemed that we were climbing that hill slowly and before long he was going to be on top of that mountain and instead we’re still standing in that valley,” Linker said. 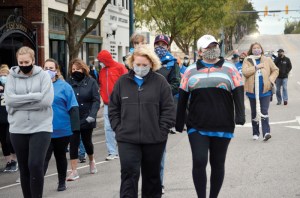 Dozens of people walked the streets of downtown Salisbury during the Into the Light suicide prevention and mental health awareness walk. Shavonne Potts/Salisbury Post

She said the stigma around mental illness and suicide has to be removed. It has to be something people take seriously. Linker, who works in the healthcare field, said she sees mental illness downplayed and often mocked.

“We need to let people understand they are human beings too. They will walk this street just the same as we will acting just like nothing’s wrong,” she said.

Linker said she is strong in her faith and that she’s had the support of her church, friends and family to get her to this point. She wants others to know, if she can stand strong following the loss of her son, others can too.

Linker said she’s confident that no matter what, “God has never left our side.”

Erika Goltz also walked Saturday in support of her best friend, whose son took his life.

The country desperately needs mental health reform, said Missy Johnson, who walked along with daughter Shana Swanner in support of her sons.

It’s difficult, Johnson said, when someone is struggling and people automatically think they are an addict. She said people should consider that people may have a mental illness that is causing them to act out or a certain behavior.

“If you walk into a place and you see someone with a headscarf on and no hair, you automatically have compassion and empathy, you assume they have cancer. You don’t do that with mental health. It’s because we’re not aware,” Johnson said. 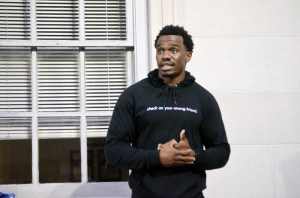 Rwenshaun Miller, a Charlotte-based counselor, author and speaker talks about starting a nonprofit and the three attempts he made at taking his own life. He spoke before the Into the Light suicide prevention and mental health awareness walk in downtown Salisbury Post. Shavonne Potts/Salisbury Post

Walkers on Saturday heard from Rwenshaun Miller, a therapist, author, speaker and founder/executive director of Eustress Inc., a nonprofit that focuses on raising mental health awareness through conversation and activities to break the stigma associated with mental illness especially in black and brown communities. Miller was diagnosed with bipolar disorder while at UNC-Chapel Hill. He spent time in the psych ward, sought treatment and later began seeing a therapist.

He soon stopped taking his medication and seeing a therapist, mostly because he didn’t want people to know. He thought he was “cured.” But Miller then began to self-medicate with alcohol for three years until he tried to take his own life three times — twice by taking pills.

“The last one, I put a gun to my head and pulled the trigger and it jammed on me,” he said.

Once he got the help he needed, Miller said, it made him look at the world differently. It took seven years to be comfortable enough to share his story.

He started an anonymous blog and received feedback from his friends who were suffering in silence with mental health issues.

“I also understand there’s a lot of people out here that are suffering alone so that’s what convicted me to share my story,” he said.

Henrietta Smith walked in support of her 17-year-old son, who has dealt with a number of life changes and attempted suicide in the past.

“I’m out here really just to support. There needs to be more awareness amongst the African-American community,” Smith said.

“Things can be prayed away, but you have to act on it as well because faith without works is dead,” Smith said. “So I believe we need to get real and support our children, support our teenagers and support our parents because we have lost a good number of people due to suicide. It’s not just written off as, ‘Oh you’re crazy or you need to go to church.’ You can be in church all the time and you can still be dealing with something.”

Smith, who is a believer in seeking therapy when needed, said it’s good to talk to someone else.