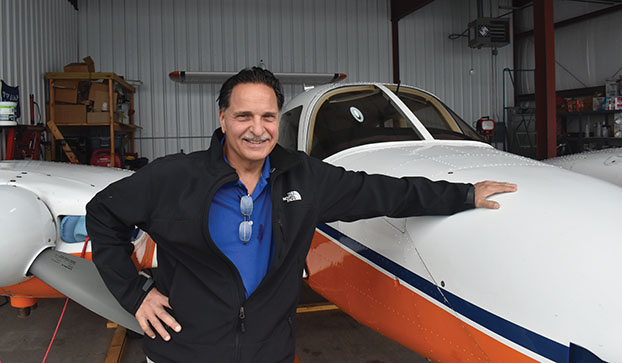 James Javurek fell in love with flying at an early age and hasn't dreamed about doing anything else. Even when he retires from piloting for American Airlines, he plans on teaching others. Ben Stansell/Salisbury Post

SALISBURY — The torn backs of three T-shirts are pinned to the wall of James Javurek’s office at the Mid-Carolina Regional Airport.

The pieces of three shirts, two white and one neon green, with words scribbled on them represent the impact that Javurek has had on the profession he loves. They’re also a rite of passage for pilots.

When a flight student gets behind the controls of a plane and takes it for a ride through the clouds alone for the first time, it’s called “going solo.” That’s one of the final steps in obtaining a pilot’s license. It’s a celebratory moment, and it calls for a unique tradition.

“When you solo, you get your shirttail cut off,” said Javurek, who still smiles when remembering his first time going solo.

The names on the shirt backs hung on Javurek’s office are Merritt Eaton, Adam Habeeb and Jared Javurek, James’ own son. All three are graduates of Mid-Carolina Aviation, a flight school Javurek started a little over a year ago at the Mid-Carolina Regional Airport. Javurek’s school has three airplanes, a Piper Cherokee, a twin-engined Piper Seminole and a Cessna 172 that’s owned by his partner, Richard Franklin.

When someone graduates from Javurek’s school, they earn a private and commercial pilot license. On average, it takes a little over a year to go through the entire curriculum, but Javurek said it can be done in nine months if someone dedicates themselves to learning.

“You can do it in a shorter amount of time if you’re out here flying when you’re not eating or sleeping,” Javurek said.

Javurek never thought he’d be teaching other people to fly, but his head was in the clouds from the time he entered middle school.

“One day I was in junior high school and everybody was talking about what they wanted to do in life. I just said ‘You know? I want to be a pilot,’ ” Javurek said. “They say do what you love and so I decided to be a pilot.”

Before he even got his high school diploma, Javurek had gone through flight school and received his pilot’s license. Since then, he’s ascended to the rank of captain for American Airlines and has logged 35,000 hours of flight time. 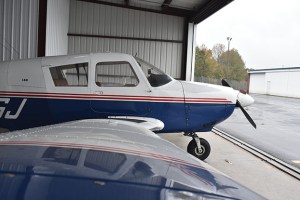 In about two years, Javurek will turn 65 and will be forced to retire from commercial flight. He plans on remaining engaged in the corporate airline world, but he will also have more time to focus on his flight school.

“We’re trying to help the high schools form an aviation-STEM program and these students can come and learn with us,” Javurek said. “We want to give them a direction to go for a future profession. And it doesn’t even have to be flying. They might not want to fly, but they might want to be an engineer, someone who works in the industry, an aircraft mechanic. You have to start somewhere and this could open their eyes.”

Javurek has spoken with representatives from the Rowan-Salisbury Schools Career and Technical program and hopes to form a partnership with high schools in the county to teach students about aviation.

Although Javurek was provided with an opportunity to learn about aviation at a young age, most students across the country and in Rowan County don’t receive the same chance. Valerie Steele, now the airport director at Mid Carolina Regional, didn’t have an obvious path to aviation when she was growing up. Still, she managed to beat the odds and succeed in a white, male-dominated field. She’s excited that Javurek could provide high schoolers with an opportunity that she didn’t have.

“My parents were great. They really helped me, but we had to go out and do all of our research and find an airport and find people,” Steele said. “Had someone come to my school and present about aviation to my entire school, I bet more students than just myself would have been interested in the opportunity.” 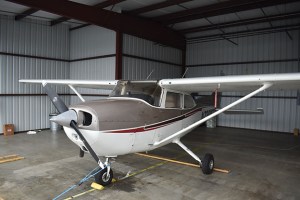 Before the school program can lift off, Javurek has to find funding to pay for flight time and other resources. He’s applied for a U.S. Aviation Workforce Development Grant that could supply funding for several flight simulators that he hopes to install in schools around the county.

If everything goes according to Javurek’s plan, he’ll have more shirttails to hang on his wall in the not-so-distant future. More information about the flight school can be found by emailing jamie@flymcaviation.com.