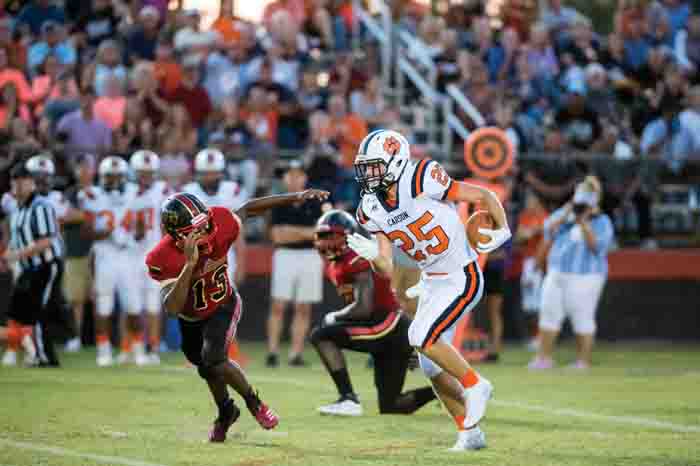 It’s not because he’s a 6-foot-4 football receiver and caught six touchdown passes last fall — five of them against Rowan County opponents. 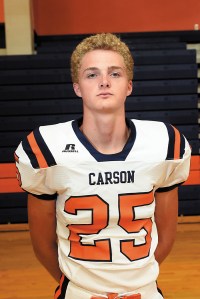 Jake Harris. (photo by Wayne Hinshaw, for the Salisbury Post)

No, it’s “Target” because he once threatened to lead the world in being struck by baseballs. As a freshman jayvee player in the spring of 2018, he was a magnet for wayward pitches. Harris was plunked 11 times in 20 games, an extraordinary ratio leading to an extraordinary number of bruises and a .506 on-base percentage that Harris and his coaches had to be pleased with.

Varsity pitchers showed sharper control — or maybe Harris got better at getting out of the way. In 30 games his sophomore year, he was only targeted five times. He didn’t lead the team, although he did take runner-up honors. Catcher Garrett Alewine trotted to first base 12 times after “wearing” pitches.

Harris isn’t a mind-boggling athlete, just a solid one. Good enough that he’s been able to make a meaningful contribution to three Carson athletic programs over the years. He’s also done the basketball thing in the past, performing the mostly thankless roles of rebounder, shot-blocker and defender.

“I’ve played baseball and basketball all my life, started travel baseball at age 10,” Harris said. “Sports have always been really important to me. There were times when I did basketball, baseball and football stuff all on the same day.”

It says good things about him that his favorite sports memories aren’t about individual deeds.

He had two touchdown catches against rival South Rowan last fall, but he gets more excited talking about being called up to the varsity as a freshman to sit on the bench for the 2018 basketball playoff run. Carson reached the fourth round of the 3A playoffs before being stopped by a Cox Mill powerhouse that included current ACC players Wendell Moore and Leaky Black. Led by Jamarius Hairston, Jailen Williams and Owen White, the Cougars finished 26-3.

Then there was the Cougars’ baseball run in the spring of 2019. Harris was in the lineup for that one as a sophomore. Carson went 28-4 and reached the Western Regional championship series before dropping Game 3 of a best-of-three against Marvin Ridge. Another hit or two and Carson would’ve been playing for the 3A state championship.

“That basketball team and that baseball team set records and I got to be part of those runs and got to play with great players,” Harris said. “There were lots of wins and lots of really good memories.”

As a well above average student as well as athlete, high school life was marching along smoothly for Harris up until March 2020. His junior year baseball season had gotten off to a nice start — 6-for-22 with five RBIs and no HBPs — when COVID-19 stopped everything. That was less than eight months ago, but it seems like eight years ago.

There was no American Legion baseball last summer, but Harris was one of the guys who suited up for the Rowan NC3 team at Newman Park. Harris played first base and outfield, served as the DH some. He drove in eight runs and got nailed by a few pitches.

“It was fun getting back on the field and we all learned a lot,” Harris said. “It wasn’t much different than Legion.”

Then school started. School has changed as drastically as athletics.

“It’s very different,” Harris said. “A week is two days of school and five days away from school. You have to challenge yourself every day to stay motivated.”

Harris has lifelong friends and teammates who will head to junior colleges or small four-year schools to continue their baseball dreams after graduation. COVID-19 has erased a lot of camps and games and scouting opportunities, so scholarships are even tougher to come by than they normally are.

Harris is following a different route.

“The No. 1 school for me is UNC, where my mother went, and that’s always been the dream school for me,” Harris said. “My sophomore year I started realizing that I wasn’t going to be good enough to play a sport at UNC, so I’ve been focused on trying to get there as a student. I’ve applied, and I’m hoping to be accepted. Career-wise, I’m thinking about law or business, but if something comes up where I can stay involved with sports, I’d be very interested.”

While he has no goals of playing ball past high school, Harris is still determined to put together a memorable senior year. He has no plans to play basketball this school year, but football and baseball will still be a big part of who he is.

Even the condensed seasons planned by the NCHSAA aren’t a sure thing to happen. Harris is well aware of that, but he’s been a faithful regular at the voluntary baseball and football workouts that have been taking place.

“We do football on Monday, Tuesday and Thursday, and we’ve been doing baseball on Mondays and Tuesdays,” Harris said. “So there’s been some overlap. My first priority is baseball, but I try not to miss either one.”

A football season that begins in February is almost too strange for Harris to think about, but he’s had good chemistry with Carson quarterback Alex London for a long time, going back to their middle school days with the Southeast Patriots. Besides the two TD receptions against South Rowan last fall, Harris had one each against North Rowan, West Rowan and East Rowan. He didn’t find the end zone against Salisbury, but he did have a couple of catches against the Hornets. His other 2019 touchdown came against North Stanly. He had eight catches in that game, as Carson, which is normally run-heavy,  got behind early and was forced to throw.

“Normally, the football season starts hot and then you’re freezing by the end of it,” Harris said. “This time it’s going to start out really cold, but hopefully it will warm up by the end.”

The plan is for the high school baseball season to extend well into June. That will create new challenges for American Legion baseball, which normally starts in late May.

“I just hope we get to play our football and baseball seasons,” Harris said. “A shortened season is better than no season. If we get to play, we’ll be glad for it and make the best of it.”

Many of the normal high school experiences have gone by the wayside for the Class of 2021. Spring athletes lost their 2020 season and now they keep their fingers crossed for a partial season as they close the book on high school.

“Looking back on it, I’m just happy I had some full varsity seasons, especially that sophomore baseball season,” Harris said. “Some of my teammates didn’t get to play varsity until they were juniors. They’ll never get to experience a full season.”

Harris and his Carson teammates finished up play in the local fall league over the weekend. They know there’s at least a chance that it’s the last time they’ll play together. Everyone stopped taking things for granted months ago.

Harris had another experience last week that will be a permanent part of his memory from 2020. He voted in the election. He’s got the “I voted” pen to prove it.

“I was fortunate that I’d turned 18 and got to vote,” Harris said. “Most of my classmates will have to wait four years to get a chance to vote for a president. Voting is an important right. There are people around the world that don’t get the opportunity.”