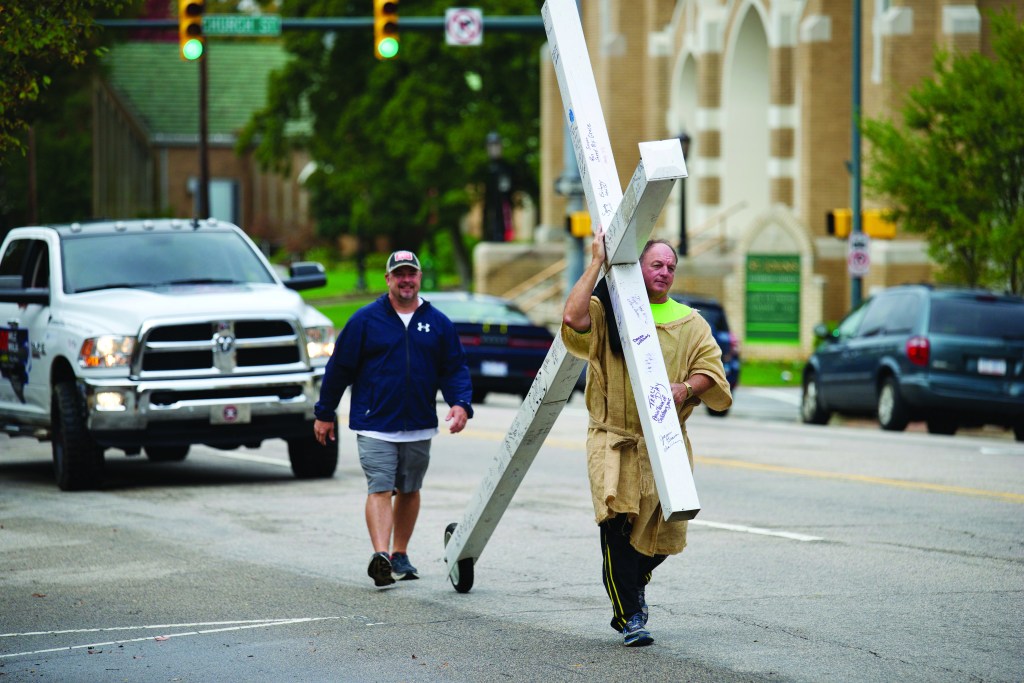 SALISBURY — Local pastor Rev. Johnny Boggs was walking up West Innes Street adorned with sack cloth and lugging a cross covered in signatures for a small part of the Christian symbol’s 500-mile journey.

The cross is making its way from Cherokee to Manteo as a project of pastor Brent Sellers and I AM Outreach Ministry.

The ministry is a faith-based program in Knightdale for men who struggle with drug addiction and is free of charge for participants.

“We take men in with life-controlling issues,” Sellers said.

Sellers said he struggled with addiction for two decades and has felony convictions including charges for breaking into churches. He credits his faith for his recovery.

“I bowed my heart to the Lord and he gave me a new mind, a new spirit, a new heart,” Sellers said.

Sellers said his own journey was still difficult because he still had his old habits to break. Sellers was walking with two students in the program and said message he is trying to send is the cross is where God met humanity.

“The purpose behind the cross is what Jesus did on the cross,” Sellers said.

Sellers said he stopped to talk to a number of people along the way as the group has made their journey.

The cross is equipped with some creature comforts: a single wheel, a shoulder pad and it is not made out of solid wood.

Sellers said the cross is more comfortable than the cross Jesus would have carried to then be executed on by crucifixion, but there are many things in contemporary Christianity that are comfortable because of that sacrifice.

Sellers said he is walking because there is still an element of suffering, despite modern improvements to his cross.

“You walk down I-40 for 15 miles and see you how feel afterwards,” Sellers said. “There is a suffering in doing this.”

Sellers said he showing people his faith by walking and he is walking for people who are addicts just like he was because he loves them.

Sellers said the walk was a new idea and he was inspired by a pastor in California who walked 500 miles and another who has walked the country. Sellers said he did not know about the pandemic before he decided to make the journey, but he felt God was telling him to still walk.

When asked if the ministry is raising money, Sellers said it is accepting donations, but he is not soliciting them on the walk.

Boggs, pastor at non-denominational Mount Hope Church in Salisbury, said the sack cloth is a sign of repentance and he felt compelled to chip in for the walk because he as a pastor is overrun by those seeking help for family members struggling with addiction who do not have insurance.

“Even as a pastor, I have nowhere to really refer them,” Boggs said.

Boggs said when he talked to Sellers, he knew he was “for real.”

“He’s been there, he’s done it,” Boggs said, adding when he got a call from Sellers he started the walk with him in Cherokee.