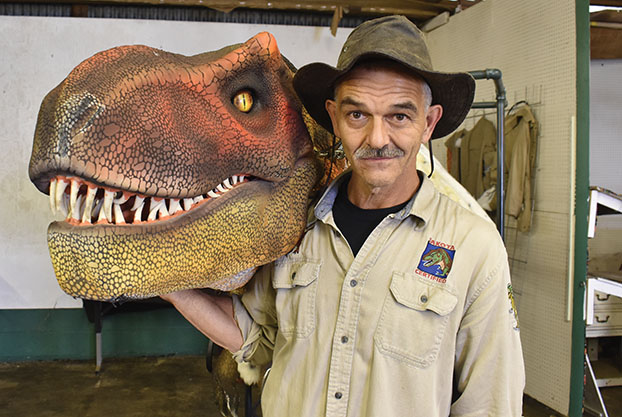 When Ed Bounds was asked to work a dinosaur puppet show nearly 10 years ago, he resisted the idea. Now, he has about 20 animatronic dinos, many of which will be on display this weekend at the Rowan County Fairgrounds. Ben Stansell/Salisbury Post

SALISBURY — The Rowan County Fairgrounds will be transformed into a prehistoric park this weekend as the Dakota and Friends dinosaur show hosts its second-ever Dino Hunt.

The idea for the Dino Hunt came from Ed Bounds, who created the Dakota and Friends show about eight years ago after having an epiphany while volunteering at the North Carolina Zoo in Asheboro. As a volunteer at the zoo, Bounds primarily worked with chimpanzees. But one day Bounds was given an assignment nobody wanted: he was asked to man the dinosaur puppet show that the zoo was presenting at a nearby school.

“I didn’t want to help with the dinosaur thing, but my wife talked me into it,” Bounds said. “They couldn’t get anyone to hold the puppets.”

While it wasn’t a job that Bounds was looking forward to, it soon became something he loved.

“I was just trying to help. When the day was over, the parents couldn’t drag their kids away from me,” Bounds said. “I wasn’t trying to keep them there. I was just holding a baby dinosaur that looked real.”

That’s when the lightbulb went off.

“After a few weeks of that, I told my wife that I was quitting my job and that I was going to do a dinosaur show,” Bounds said.

The same person who talked him into volunteering to puppet the dinosaur in the first place quickly tried to talk him out of it. Bounds said that his wife told him he was crazy for pursuing the project. In response he told her to “just watch” and began to plan Dakota and Friends.

Since starting the show, Bounds has become a fixture at county fairs, minor league baseball games, birthday parties and libraries in the state and across the country. One of his main clients has been the ImagineOn center in Charlotte, but he’s also thrown out a first pitch in a dinosaur costume for the Wisconsin Timber Rattlers minor league team. As his business continued to grow, he kept adding more dinosaurs, growing his collection to about 20. Along with Tyrannosauruses and Triceratopses, Bounds’ animatronic menagerie includes a unicorn and a “llamacorn.” 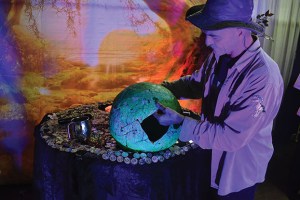 When COVID-19 shut down ball games and county fairs and prevented him from showing off his dinosaurs at other events, Bounds knew that he would have to get creative. Thinking outside the box, Bounds decided to show off his Jurassic beasts in a new way — a dinosaur hunt that would be safe and engaging.

“I remember hearing about drive-thru safaris when I was a kid, so I took that idea and I set up my dinosaurs at the Rowan County fairgrounds and let people drive through and shoot their Nerf guns at the dinosaurs,” Bounds said.

The first Dino Hunt event was held at the fairgrounds during the last weekend of September and was a “smash hit.” Bounds said that hundreds of people participated.

“We had traffic backed both ways on (Interstate) 85,” Bounds said. “It was incredible.”

In the last month, Bounds and his crew evaluated what worked and what didn’t at the first dino hunt and have plans to make this “zombified” version even better. Jamin Skipper, who has worked to coordinate lights and sound for Dakota and Friends for about three years, said that this version will be even brighter and will feature more performance-based aspects.

“It’s bigger and better than the last one because that was our first one,” Skipper said. “We figured out what things cause problems with traffic flow, we’ve added a few things in. With it getting darker early,  we’re going to do a lot more with lighting to add dramatic impact.” 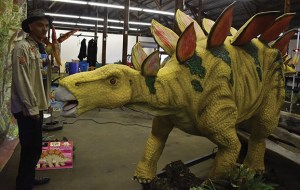 Ed Bounds has become an expert on dinosaurs so that his shows can be educational and entertaining. Ben Stansell/Salisbury Post

While Bounds encourages visitors to bring their own Nerf-style guns, he said that plastic guns and foam bullets will be sold at the beginning of the hunt. While guests will not be able to keep the foam darts once they shoot them at the roaming raptors, the bullets won’t be wasted.

“Since you can’t get out of your car, you can’t recollect the bullets, but we pick them up, sanitize them and we’re going to take them to Camp Happy Days,” Skipper said.

Camp Happy Days is a camp based in Charleston, South Carolina, that provides support and encouragement to children battling cancer through engaging programs that are cost-free for families. The Dakota and Friends dino show visits Camp Happy Days almost every summer.

Bounds said that being able to put a smile on the face of children who have faced hardships is his favorite part about what he does.

“Mr. Rogers always said to look for helpers. I want to be one of those helpers,” Bounds said. “Now is my chance to do something beneficial and honest to goodness that’s what I’m trying to do.”