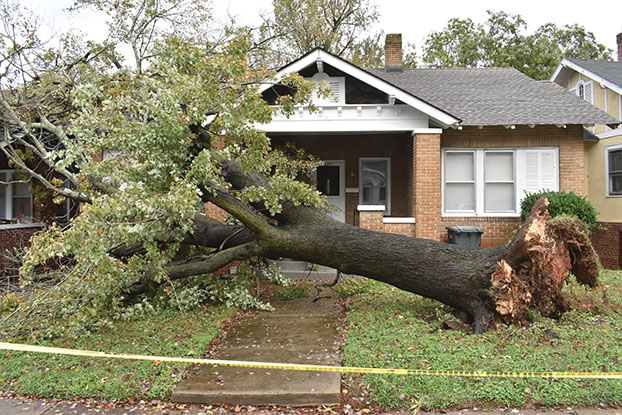 High winds brought a large a tree down on a house on South Ellis Street around 9 a.m. First responders spent most of the day Thursday responding to similar incidents throughout the county. Ben Stansell/Salisbury Post

SALISBURY — Nearly 7,000 people in Rowan County were without power on Thursday as strong wind gusts from the remnants of Hurricane Zeta brought down trees and power lines throughout the area.

Gusts of wind reaching about 40 mph were recorded in the morning at the Mid Carolina Regional Airport, Airport Director Valerie Steele said. Steele said that wind speeds consistently topped 20 mph during that period. Those wind speeds in Rowan County were consistent with others recorded across the South Carolina and North Carolina region, said Bill Martin, science and operations officer at the National Weather Service Office in Greenville-Spartanburg. 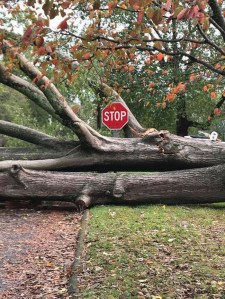 Photo submitted by Valerie Samaroo – This photo shows a downed tree in the Meadowbrook development after remnants of Hurricane Zeta came through Thursday.

While rain fell intermittently in the region and caused flooding in some areas, wind was the greatest threat brought on by the storm.

“(Zeta) moved through very quickly this morning,” Martin said. “It brought high winds with tree falls all over the place, blocking roads and falling on homes.”

The western part of the county near Cleveland seems to have taken the brunt of the storm’s damage, said Spencer Fire Department Chief Jeremi Carter.

“The Red Cross was notified of several trees on houses in the western part of the county today,” Carter said.

Along with wind damage, the Cleveland area also experienced one of the county’s larger power outages.

“There was a major power outage near Cleveland. I don’t know what caused it, but I know a few people who live that way and one of our tower sites is on a generator up there,” Owens said.

In total, over 450,000 power outages were reported in North Carolina. Forsyth and Guilford were the hardest hit counties, with Forsyth reporting over 60,000 outages and Guilford reporting nearly 45,000. 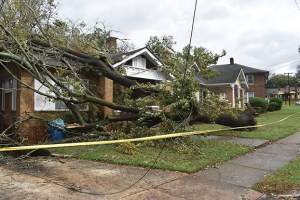 The falling tree did not injure the homeowner or puncture the home’s roof. It did bring down a powerline. Ben Stansell/Salisbury Post

A homeowner on South Ellis Street thought a loud truck was revving its engine outside when a powerful gust sent a large tree tumbling down on top of her house around 9 a.m. Some of the tree’s branches also fell on her neighbors’ house and were resting on a downed power line. It was fortunate that the tree didn’t puncture either of the houses’ roofs, said the property landlord Kay Wilson.

“I’m glad the tree didn’t fall straight back,” Wilson said. “ If the house had taken a direct hit it would’ve hurt her.”

Wilson said that the homeowner was in good spirits and that neighbors and family members were checking on her throughout the day.

Overall, local emergency officials were happy to report that no serious injuries occurred due to the storm.

“This one we lived through pretty well,” Owens said.