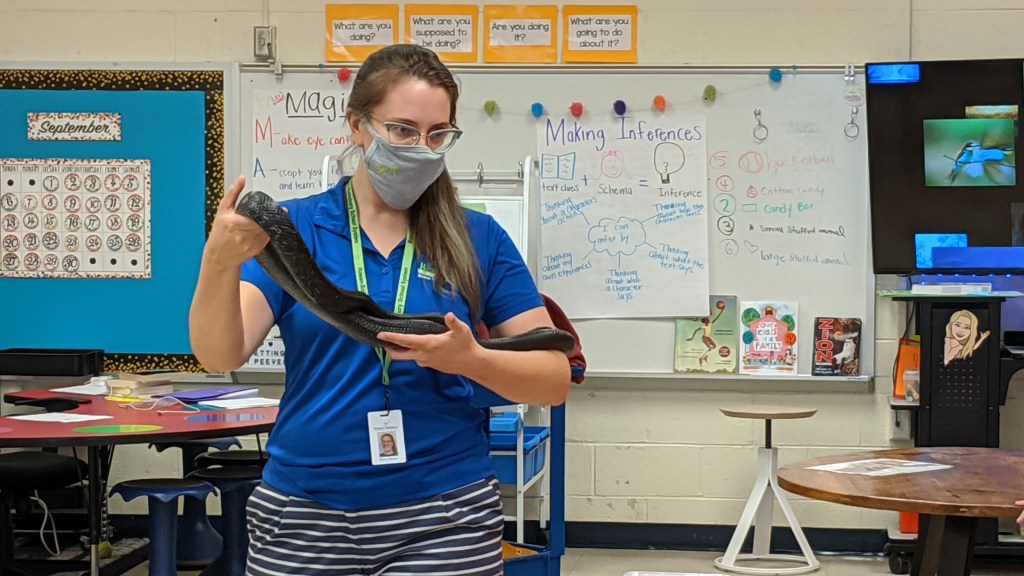 SALISBURY – Mary Meyer’s sights were set on working with lions when she started on the road toward getting her bachelor’s degree.

She has always been fascinated by the big cats. She wanted to go to graduate school to study under one of the world’s premier lion researchers and work in the field, but she discovered two things about herself: she likes living in one place and she had a knack for teaching.

Her first internship was in a zoo. She got to shadow the zookeeper who took care of the lions, which she said was “awesome”, but she was surprised by how much she enjoyed the main part of the job: teaching summer camp. She went on to keep teaching in other internships and found she was good at it and enjoyed it. Teaching just clicked for her.

Fortunately for her, Meyer, an instructional specialist, still gets to work with animals at Horizons Unlimited. Her favorite of the bunch is Horizons’ new black rat snake, ironically dubbed Fluffy. The snake is 6 feet long. Meyer said she is working on building a handling relationship with him.

“He’s got that wow factor of being enormous,” Meyer said.

Meyer was recently given an Outstanding Service Award by Environmental Educators of North Carolina, a professional organization. Meyer said the award recognizes members in leadership positions for their contributions. She is on the board.

“It was a surprise, and a really great surprise,” Meyer said. “I just wasn’t expecting it. It’s always nice when you’re working toward something and you get recognized.”

COVID-19 means the district is not approving field trips, so Horizons programs are going to schools instead of vice versa. That means Fluffy is on the road often. Horizons has also transitioned to more virtual content, and Meyer said the institution has been modeling how to get kids outside.

Meyer said she has been leading workshops and webinars. She recently held a webinar on incorporating environmental education. She also has a background in instructional technology, which she said makes for a good blend in the current situation.

Meyer said she enjoys the more hands-on part of being an environmental educator. Horizons takes other animals to schools as well. Some are native, others are a bit more exotic, including a hedgehog and Madagascar hissing cockroaches.

“It started with my passion for animals, and then I started using animals to work with kids,” Meyer said. “Basically I thought it was so important for the future of our planet to have kids who are connected to the outdoors and are able to solve environmental problems.”

Meyer said some of the students do not have much exposure to animals. She pointed to the snakes and tarantulas as animals students may not have encountered. If they have, it may have been a negative experience, she said.

As a result, she asks students if they are afraid of snakes and tries to change their minds. Most of the time, she said, students at least like them a bit more than before they met.