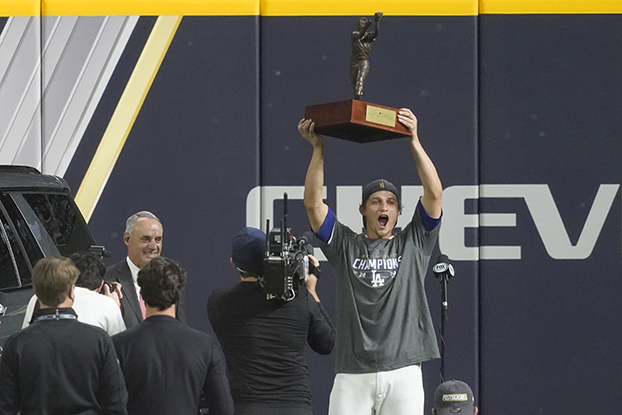 Just as Orel Hershiser did when the Los Angeles Dodgers won their previous World Series title in 1988.

Seager, who attended Northwest Cabarrus High School, batted .400 with two homers, five RBIs and six walks against the Tampa Bay Rays, including a sixth-inning grounder that allowed Mookie Betts to speed home from third base with the go-ahead run Tuesday night in Game 6. The star shortstop jumped into the arms of second baseman Kiké Hernández after Julio Urías struck out Willy Adames to end a 3-1 win that clinched the championship.

Betts had come to the Dodgers to make a World Series difference. With the mad dash to home plate, he put Los Angeles over the top.

After Betts bolted from third for the go-ahead run on Seager’s infield grounder, he then led off the eighth with a punctuating homer.

The Dodgers had played 5,014 regular season games and were in their 114th postseason game since Hershiser struck out Oakland’s Tony Phillips for the final out of the World Series in 1988, the same year veteran lefty Clayton Kershaw — the three-time NL Cy Young Award winner who won Games 1 and 5 of this Series — was born in nearby Dallas.

Kershaw was warming in the bullpen when Julio Urias struck out Willy Adames to end it and ran alongside teammates to celebrate in the infield — many players and coaches still wearing face masks at the end of a season played out amid the coronavirus pandemic.

Los Angeles had come up short in the World Series twice in the previous three years. And Betts was on the other side two years ago with the Boston Red Sox, who before this season traded the 2018 AL MVP to the Dodgers. They later gave him a $365 million, 12-year extension that goes until he turns 40 in 2032.

Randy Arozarena, the powerful Tampa Bay rookie, extended his postseason record with his 10th homer in the first off rookie right-hander Tony Gonsolin, the first of seven Dodgers pitchers. The Rays never got another runner past second base as LA’s bullpen gave reliever-reliant Tampa Bay a taste of its own medicine.

About 2 1/2 weeks after the Lakers won the NBA title while finishing their season in the NBA bubble in Orlando, Florida, the Dodgers gave Los Angeles another championship in this year when the novel coronavirus pandemic has delayed, shortened and moved around sports seasons.

Seager ended up hitting .310 with five homers and 11 RBIs in the seven-game win over Atlanta in the NL Championship Series, including three homers as the Dodgers fought off elimination in Games 5 and 6. He drove in runs in five consecutive plate appearances, starting with his last two at-bats in Game 2, matching a feat that had been accomplished only by Houston’s Carlos Beltrán in 2004.

The previous MVP of both a League Championship Series and the World Series in the same year was San Francisco pitcher Madison Bumgarner in 2014. Only eight players have done it — all National Leaguers.

Seager was the 18th overall pick in the 2012 amateur draft and just 21 when he debuted in September 2015. He became a unanimous pick for 2016 NL Rookie of the Year after hitting .308 with 26 homers and 72 RBIs, then made his second straight All-Star team in 2017, when he batted .295 with 22 homers and 77 RBIs.
Seager missed the 2017 NL Championship Series because of a back injury, then returned for the World Series against Houston and hit .222 (6 for 27) with four RBIs. He had a two-run homer off Justin Verlander in the Dodgers’ 5-3 loss in Game 3 and was 1 for 4 with the game-ending grounder against Charlie Morton in the 5-1 defeat in Game 7.

Seager then missed the entire 2018 postseason when he did not play after April 29 due to a torn ulnar collateral ligament in his right elbow that required Tommy John surgery. He also underwent left hip surgery.

When he returned for 2019, he was slowed by a strained left hamstring that sidelined him from mid-June until mid-July but still tied for the National League lead with 44 doubles. Then he hit a team-best .307 with 15 homers and 41 RBIs in this pandemic-shortened season.

The highlight of the regular season came Aug. 17, when he played against his brother, Seattle third baseman Kyle Seager, for the first time in the majors and they became the first brothers to homer in the same game since San Diego’s César Crespo and San Francisco’s Felipe Crespo on June 7, 2001.