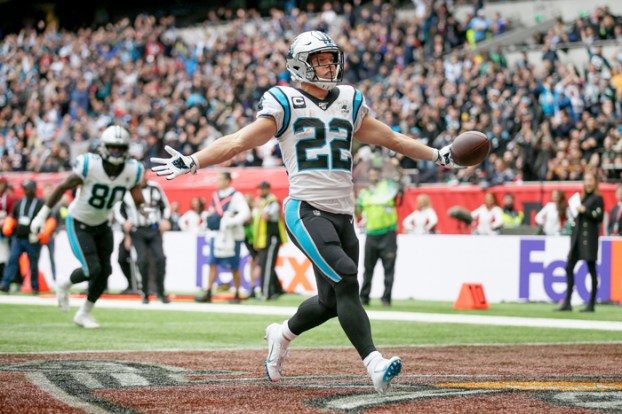 Panthers watch: McCaffrey back at practice, Reid not a fan of practice squad role

CHARLOTTE —   Christian McCaffrey has been designated for return from the team’s injured reserve list, increasing the likelihood Carolina’s 2019 All-Pro running back will play Thursday night against the Atlanta Falcons.

McCaffrey arrived at Panthers practice Tuesday with a red jersey and a baseball cap signifying an injured player, but he quickly changed into a black practice jersey and a helmet.

McCaffrey hasn’t played since Week 2 when he suffered a high ankle sprain in a loss to the Tampa Bay Buccaneers.

Panthers coach Matt Rhule reiterated Tuesday that he is “hopeful” McCaffrey will ready to play against the Falcons, but added that the decision was largely up to the training staff.

“He looks good,” Rhule said. “He looks like he is moving around great. We will let the medical people and him determine how much he can do and whether he can play in a game.”

McCaffrey was off to a solid start with 223 yards from scrimmage and four touchdowns in two games.

“It’s just another weapon,” wide receiver Curtis Samuel said of McCaffrey’s return. “There is no such thing as having too many playmakers out there.”

Rhule said McCaffrey was “exhilarated” to be out at practice with his teammates. “I know he wants to play, but I also know he’s a process guy and he understands that we can’t shortcut the process,” Rhule said.

McCaffrey’s backup Mike Davis had 149 yards from scrimmage and a touchdown in Carolina’s 23-16 win against Atlanta earlier this month. Rhule said Davis will still see some action at running back even if McCaffrey returns.

Washington (2-5) lost safety Landon Collins to a season-ending Achilles tendon injury in a win over Dallas on Sunday. Rookie Kamren Curl, a seventh-round pick, will replace him for now.

“I just don’t think playing on the practice squad is reflective or indicative of my career,” Reid said in a phone interview on Tuesday.

A first-round pick by San Francisco in 2013, Reid went to the Pro Bowl in his rookie season. He joined Colin Kaepernick in 2016 when the former star quarterback took a knee during the national anthem to protest police violence, racism and social injustice.

Kaepernick hasn’t played in the league since that season and Reid sat out the first three weeks of the 2018 season before Carolina signed him. Both players filed collusion grievances against the NFL and settled their cases in February 2019.

Rivera also added: “If we didn’t (have Collins), believe me, I’d call him. I think he’s a guy that has the ability to play in this league and hopefully, if somebody needs a strong safety, he’s a guy they would call.”

Washington had a need and made the call but only for a practice squad spot.
Reid has been working out and waiting for an opportunity to join a team’s active roster. He said he was told Washington wants to give Curl a shot at starting.

“I’m just not in a place to play on the practice squad right now,” Reid said, adding that he texted Rivera to let him know his decision. “If they go a different direction, I’ll be ready.”

Reid said he hasn’t received any calls from other teams.

“Quarantine has been good to me. I’ve been blessed to be with my family during a time of year I normally wouldn’t be,” Reid said. “I love being with my family. Meantime, I’m training and waiting. I’m believing in God. I’m trusting in his will.”

Despite a losing record, Washington is a contender in the NFC East. The first-place Eagles are 2-4-1 and lost at Washington in Week 1.

Reid had 130 tackles, four sacks, six passes defensed, two fumble recoveries and a forced fumble in 2019. The tackles and sacks are the most by a Panthers safety in one season.