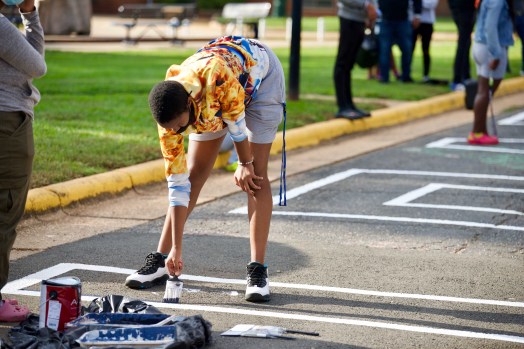 Carl Blankenship/Salisbury Post - Alyssa Walker-Gurnell tracing the side of the T in the mural. Walker-Gurnell said she hopes young people will vote more this year. 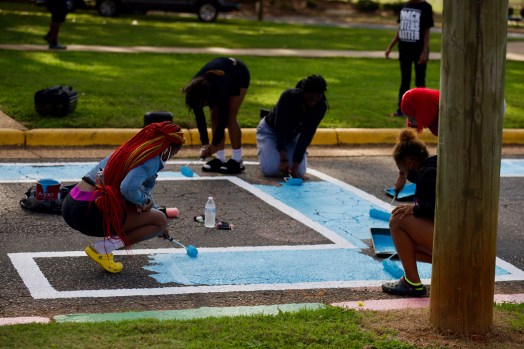 Carl Blankenship/Salisbury Post - Livingstone Students filling in the C on the mural. The LC is painted blue, and VOTES is painted black with the exception of a red V.

SALISBURY — Livingstone College makes the civic duty of voting a core part of its student experience, and it put that message in paint this week.

The college held a rock the vote rally a few weeks ago, bused students to the polls and, with a week left before Election Day, emblazoned the campus with a mural to let students know they should get to the polls.

The mural used the school’s colors, black and blue, with a stylized red checkmark intended to be the V in “LC VOTE.”

The letters were measured and traced out by local artist Phillip Osborne, who recently created a similar mural at Winston-Salem State University. Osborne said he spent five hours on the project Monday.

Osborne said he hopes the message gets out and other colleges will be interested in having him organize voting murals on their campuses. With only a few days to go, Osborne said he can turn around a mural in two days and has the time to make it happen now because he is transitioning to a new position.

Osborne finished up working in admissions at Livingstone College last week and is starting a new chapter in his career as a high school college adviser. Osborne said he has been creating art on the side for years.

Students came out to fill in the letters on Tuesday afternoon. SGA Advisor Anthony Brown said they came from all over campus. Some were involved in student government or other groups.

“I actually recruited these students to go to school here,” Osborne said.

Brown said the college is nonpartisan, but it does encourage students to exercise their right and civic duty. He said registering students to vote is one of the first initiatives when students come to campus, and it gives freshmen the opportunity to register when they arrive.

“For the most part, everyone is eager to do it,” Brown said.

Brown said the college wants to encourage students to use their voice for whatever they stand for because it prepares them for the real world. The college even includes educating students about civic duty in the holistic module created by Livingstone President Jimmy Jenkins.

“That’s how you are heard,” Brown said.

Jalen Robinson, a freshman who was painting on Tuesday, said what is happening in the country now is making history.

“We’re going through a critical time right here with the pandemic.” Robinson said. “I feel like it’s very important that everybody goes out and has their voice heard no matter if you’re Black or white.”

This the first election in which Robinson could vote, and he said the experience going to the polls was exciting. He called his mom to tell her how excited he was about being able to vote amid the turmoil of 2020.

Robinson said the mural will hopefully be nice to look at, but that the act of voting is more important. He said he hopes it will still be there next year and keeps encouraging people to vote outside of a presidential election year.

Alyssa Walker-Gurnell, a transfer freshman, has been passionate about voting for a long time. Now 21, she preregistered when she was 16 so she would be able to vote as soon as she turned 18.

“I feel like Livingstone is already doing a great job at getting our students registered,” Walker-Gurnell said.

Walker-Gurnell said she also hopes the mural keeps encouraging people to vote because voter turnout among young people is low.

“It does bother me,” Walker-Gurnell said, adding she has volunteered with voting organizations since she was young.

She decried the mindset of people thinking their single vote is insignificant because individual votes add up to a significant number.

Walker-Gurnell said she thinks the Trump presidency has kicked her generation into gear and pointed to celebrities and social media platforms that are all encouraging people to vote.