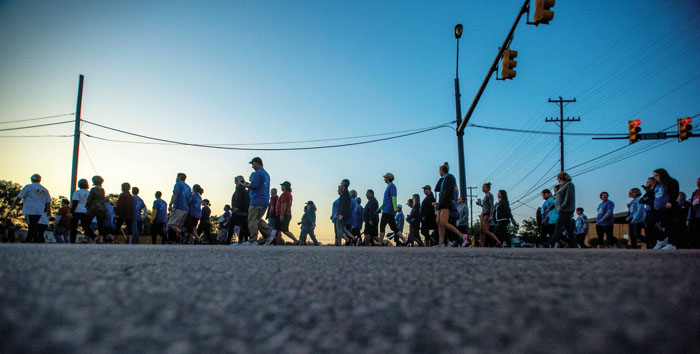 The pandemic-interrupted year has raised concerns about an uptick in domestic violence, drug usage and suicide, Lee said. As a result, the United Way feels more compelled than in its 2019 inaugural year to put together its Into the Light Suicide and Mental Health Awareness Walk on Saturday.

“We did not want to lose the progress we had made,” she said.

In 2019, a large crowd of walkers gathered in front of City Hall and walked down Main Street as the sun rose for a program at Wallace Educational Forum. This year, the United Way plans to have groups of 50 walk a short distance north (toward Spencer) along Church, Main and Lee streets. The initial gathering point will still be Salisbury City Hall, where participants will receive a T-shirt before being sent on their way. Masks will be mandatory.

In lieu of an in-person program, WSAT — 103.3 FM and 1280 AM — will broadcast a series of speakers, allowing folks to listen from their cars or wherever there’s a radio. Because it will be available on the radio, Lee says she hopes it will reach far more people than last year’s in-person event.

Pre-registration is required and can be completed by visiting rowanunitedway.org/into-the-light or calling the United Way at 704-633-1802. It’s $25 to register, with no charge for children under 5. Lee said participants can arrive as early as 6:30 a.m. Saturday. The walk will begin at 7:30 a.m. and the radio program starts at 8 a.m.

“The plan is to begin walking while it’s dark, and the sun is set to rise at 7:43,” Lee said. “There’s a strong symbolism there of walking into the light for folks experiencing suicidal thoughts. … Families are coming together and ultimately taking the stigma away from it. They are coming out of the darkness.”

This year’s program will feature Buddy Poole as emcee of the program; John Struzick to speak about the event purpose and program overview; Shaun Miller to talk about One Love Community Services, which provides counseling and mental health help; representatives of the Salisbury VA; Ashley Creek, who graduated from Capstone Recovery Center and now works for the Rowan County Post Overdose Response Team; Alyssa Harris, of the Rowan County Health Department; and Andrew Smith, the chairman of this year’s United Way campaign.

People who do not feel comfortable walking in groups with others can take a video of themselves walking around sunrise in their neighborhood, include a short statement about why they are walking and post it to social media with the hashtag #RowanIntoTheLight.

Money raised from the event will be used to help fund the mental health segment of the Rowan County United Way’s annual campaign.