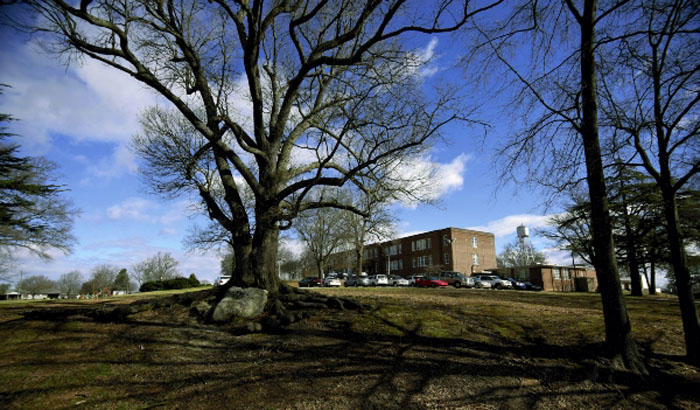 This 100-year-old tree at Woodleaf Elementary school was a favorite place for children to play during recess. Jon C. Lakey/Salisbury Post file photo

SALISBURY — More than a year after Woodleaf Elementary School was demolished, plans to put a community park in its place are moving forward.

At its meeting Monday night, the Rowan-Salisbury School system was set to approve the transfer of the former school’s property to Rowan County, which has planned on transforming the vacant area into a park for several years. Now, Rowan County government will begin to put its plans into action.

“We are happy that we can do something in the community that people can still use, people can still gather around, get their families together and enjoy the area that used to be the school building,” said commissioners Vice Chairman Jim Greene, the liaison to the county’s Parks Board.

When the school was closed in 2017 and consolidated with Cleveland Elementary School to form West Rowan Elementary, the Woodleaf community lost its centerpiece. Greene said he hopes a park will serve as Woodleaf’s new focal point.

“The school was the hub of activity for 60 or 70 years. It was an old building. We had generations of citizens that went to that school and, like all community schools, it was beloved by the community,” Greene said. “We wanted to leave something good out there.”

Rowan County commissioned the McAdams engineering and architecture firm to draw up a “rough masterplan” for the Woodleaf Park. Building a park in Woodleaf is part of Rowan County’s larger parks masterplan also drafted by McAdams in 2016. The earlier plan called for 142 more acres of parkland to be created, particularly in the northwestern and southern reaches of the county. Greene said that he’d like to see another park built in China Grove, but no immediate plans have been made for that to happen.

The next step for the Woodleaf Park, Rowan County Facilities Management Director Don Bringle said, is to present the plan created by McAdams to members of the Woodleaf community and receive their feedback.

Although McAdams has already drawn up a design for the park, Bringle said that it remains fluid and will change depending on what community stakeholders suggest and budget constraints.

“There’s some different ideas that will be coming from both the community and the architects,” Greene said.

Greene said that the current vision is for a “passive park” that utilizes walking trails and picnic areas and doesn’t require much maintenance or staffing. Bringle said that the park could also include an “all-inclusive” playground.

Once concrete plans for the park have been finalized, the county will calculate how much it will cost. The county has designated roughly $170,000 for the creation of the park, Bringle said.

“The county commissioners felt that it was important to go ahead for this community and put the money in the budget and we’re very glad that they did,” Greene said. “We feel like this is a worthy project and should go forward.”

Bringle said that the county plans on applying for a grant from the North Carolina Parks and Recreation Trust Fund (PARTF) that could double that budget, if approved.

Bringle said that the grant application will likely be due in the springtime with grant approval coming in summer 2021. Rowan County has been the recipient of funds from the PARTF grant before. Last year, the state distributed $5 million in grant money, but Bringle said that this year the state could distribute a different amount. While the county has budgeted enough money to begin construction on the park, the additional grant funding could allow it to continue to add on features in the future.

Greene said that he expects to see “some positive moves out of the park” in the springtime.

A new park in China Grove is Greene’s next project.

“It’s been difficult for us to get enough money to build a nice facility in the China Grove area but that’s one other place besides Woodleaf that we are concentrating on trying to find either a donor or find enough money to buy some land down there,” Greene said.