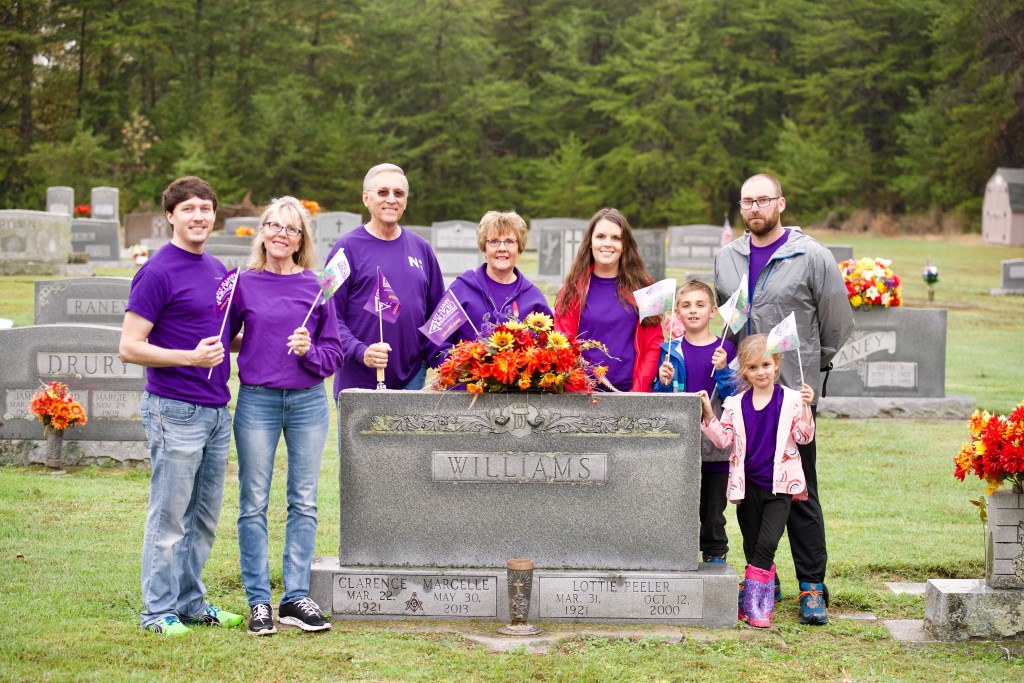 FAITH — Justin Williams and his family on Sunday started what they hope will be a new tradition.

Parents, sisters, brothers, kids and grandkids got together for a meal on a gray afternoon before making the short walk to Faith Lutheran Cemetery to honor Lottie Peeler Williams. Peeler’s “Faith name” was Binkie, though she went by Lottie in her professional life.

Lottie was Justin’s grandmother and passed away due to Alzheimer’s disease in 2000.

Justin, a high schooler at the time, remembers being frustrated he could not do more to help his grandmother. His experience with his grandmother pushed him toward a career working with people diagnosed with diseases that cause dementia. He now holds a doctorate in occupational therapy and is a certified dementia practitioner and specialist. He is vice president of clinical strategies for the company HealthPRO Heritage and helped organize similar walks all over the country to raise money for the cause heading up the company team. His sister, Holly Moody, is an occupational therapist as well

The fundraisers are part of the Alzheimer Association’s Walk to End Alzheimer’s, which happened in Rowan and Cabarrus counties this weekend. An opening ceremony was held at Atrium Health Ballpark in Kannapolis and streamed live online before walkers began. Justin’s company team has raised about $30,000 so far and hopes to raise $50,000 by the end of the year.

This year, the walk looked a bit different, with the pandemic not allowing large gatherings. The association instead encouraged teams and to hold walks in their area.

Justin and his family placed flags on Peeler’s grave and also visited others in the cemetery affected by the disease. He said the disease is prevalent in his family.

Dementia is a group of symptoms associated with several diseases, including Alzheimer’s and Parkinson’s. Williams said a number of diseases cause dementia and that they can present differently, but Alzheimer’s typically presents with a vacant stare and progresses more quickly than others.

“A lot of people think dementia is a disease in itself,” Williams said. “Dementia is a symptom.”

Williams saw his grandmother decline to the point where she would get lost in her own home and would not recognize her husband, who stayed with her through the ordeal. One of the hardest parts was the beginning, when she understood what was happening to her.

Former Faith Mayor Tim Williams is Justin’s father. He grew up around people displaying the disease, and his own grandmother died from the disease as well.

Tim said the disease is hard on caregivers. His grandmother’s children took turns taking care of her throughout the week. In the case of his mother, it was a full-time job, but the family would take turns helping as well.

“Now we see it in our generation,” said Tim’s sister, Ginger Smith.

Smith said growing up around the disease helped give the family more compassion. Tim said it taught the family how to be around people with the disease.

Justin said the approach is the most important thing to remember when caring for someone with Alzheimer’s. If someone is in a wheelchair, you have to physically get down on the same level and speak to them in a friendly, low tone, he said. People with Alzheimer’s need time to process what you are asking or telling them. He said it can take up to 90 seconds for the patient to process a piece of information.

The approach is literal, too. Justin said you should not approach Alzheimer’s patients from the back or the side because vision declines as the disease progresses as well, and you can startle them by doing so.