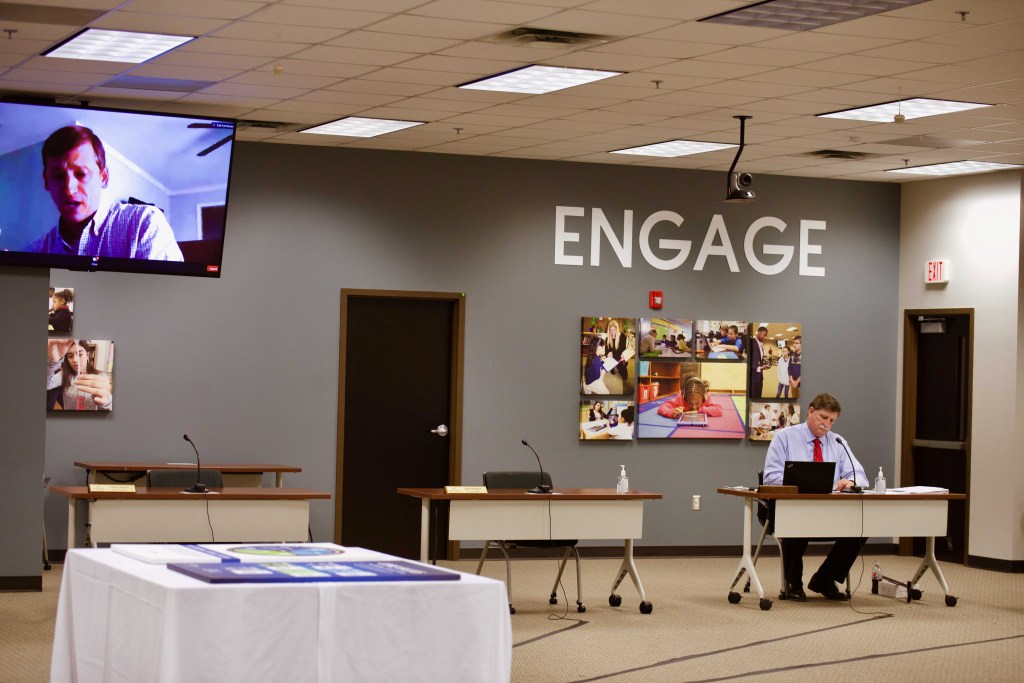 Carl Blankenship/Salisbury Post - Rowan-Salisbury Schools Board of Education member Josh Wagner joined the meeting virtually and made the motion to close Enochville and Faith. Associate Superintendent of Operations Anthony Vann gave the presentation with the recommendation to close based on public hearings and closure studies.

SALISBURY — After delays due to COVID-19 and previous closure talks running into community opposition, the Rowan-Salisbury Schools Board of Education on Monday voted unanimously to close Faith and Enochville elementary schools.

Both facilities will close in June, at the end of the 2020-2021 school year. All students affected will be moved to other nearby schools. The district does not plan to lay off any faculty or staff as part of the consolidation, and will reassign them to other locations.

The closures are estimated to save the district at least $500,000 per school annually and eliminate some of the district’s expanding surplus of seats.

Josh Wagner was the only board member who commented on the issue before making the motion to close both schools. He was seconded by Susan Cox.

“We all know this has been a long process,” Wagner said. “There are a lot of folks that are impacted any time we talk about closing.”

Wagner said, even though he has been behind consolidation for a while now, he does not discount the impact it has on communities.

The district held public hearings on the proposed closures of both schools last week. Only a handful of locals sent in comments for the study at each school. None of the comments opposed the closure of Faith. Three people did oppose closing Enochville, including one parent who spoke to the board directly.

The full process for deciding to close a school is to direct administration to create a closure study, review the study, schedule a public hearing, hold the hearing and then make a final decision.

Associate Superintendent Anthony Vann made the recommendation the board vote to close the schools at its Monday meeting, but school administration had urged the school board to consider school closures for years.

Superintendent Lynn Moody has been a proponent of consolidating the district’s schools since she was hired in 2013. The district so far has consolidated Woodleaf and Cleveland elementary schools into West Rowan Elementary and has made plans to consolidate Knox Middle and Overton Elementary into a K-8.

Administration has pointed to a declining student population, capital needs at old facilities, utility costs and the thin spreading of resources as reasons shutter school and move students. Collectively, the two schools have about $6 million in capital needs. Moody has also said larger schools are higher-performing schools.

For now, students will continue to attend Faith in accordance with the school’s attendance plan — two days in person and three online. Faith Elementary will also teach students after returning from holiday break in January. The board plans to revisit reopening schools for more days in January. Currently, elementary schools are the only public schools in the state allowed to host students five days a week.

Faith Academy, a would-be charter school, is seeking final approval from the state Board of Education in December and hopes to begin classes for students K-7 next fall. A major point of discussion for the N.C. Charter School Advisory Board when considering whether to advance the school’s application was the fate of Faith Elementary. When the State Board of Education considers the charter applications, it will have an answer about the elementary school’s future.

The board on Monday also scheduled a public hearing on the proposed closure of Henderson Independent School for Nov. 16. It plans to hold the hearing at 6 p.m. that day, amid its regular meeting.

The Henderson facility hosts the district’s alternative program, and the district is still making plans for how it will host that program in the future, but Henderson is in a state of disrepair and the board agrees the facility is inadequate.

The 100-year-old school has more than $2.5 million in capital needs and currently serves less than 50 students. Board members Dean Hunter and Alisha Byrd-Clark have both commented on attending a ceremony at the school and seeing the floor scattered with buckets to catch leaking water from the roof.